The Wire Troll: Chase Anderson Opening Eyes in the Desert 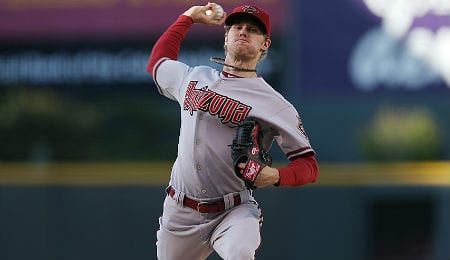 Albert Pujols was the hero Saturday, going yard to end the season’s longest game, a 19-inning affair. He’s now just seven dingers shy of moving into a four-way tie for 18th all-time with Ted Williams, Willie McCovey and Frank Thomas. Nice to see that Pujols has already put up a much stronger season for his owners in 2014. He’s still got plenty of work to do to match his first season as a Halo — not to mention his big seasons with the Cards — but at least he’s headed in the right direction this year. Hell, Phat Albert could even garner consideration as the AL Comeback Player of the Year.

And here are this week’s Wire Troll options:

Chase Anderson, SP, Arizona Diamondbacks (ESPN: 9 per cent owned; CBS: 26 per cent): We suspect people will be catching on to Anderson soon after he posted his fifth consecutive quality start on Friday against Colorado. The rookie has allowed just one earned run in four of his last five starts (including a gem against the Pirates — see video below), going 2-0 with a 1.74 ERA in that span. With 69 Ks in 79 1/3 innings to boot, Anderson (7-4, 3.06 ERA) is clearly not a fluke.

Jason Castro, C, Houston Astros (ESPN: 35 per cent owned; CBS: 47 per cent): You’re probably not paying much attention to the Astros these days, but that hasn’t stopped Castro from surging. The backstop is 8-for-26 (.308) in August with a homer and two RBI. For the year, the lefty-swinging Castro is posting a respectable 687 OPS with 11 dingers. Okay, so he’s struggled to duplicate his 2013 breakout, but he looks poised for a nice finish.

Luis Valbuena, 3B/2B, Chicago Cubs (ESPN: 19 per cent owned; CBS: 23 per cent): Okay, so Valbuena hasn’t been all that bueno in his last four games (0-for-15), but Fantasy owners don’t seem to mind. Valbuena’s ESPN ownership has spiked 16 percentage points in the past week, and he does have two homers and three RBI in August. His 756 season OPS is, in fact, pretty bueno and he’s reached double-digit jacks for the third time.

Adam Rosales, 2B, Texas Rangers (ESPN: 0.4 per cent owned; CBS: 1 per cent): Rosales is best known for his home run sprints around the bases, but you might want to get to know him on your Fantasy team as well. August has been good to the barely-owned Rosales, as he has smacked a pair of dingers (both in the same game) with four RBI, tripling his season output. Oh yeah, and he’s hitting .500 (7-for-14) this month to boost his OPS to 1050. Remind us again why no one owns him? It’s been a while since Rosales was on the Fantasy radar, but at the very least, give him a look in very deep AL-only leagues.

Roberto Hernandez, SP, Los Angeles Dodgers (ESPN: 8 per cent owned; CBS: 16 per cent): The artist formerly known as Fausto Carmona will get second life as a starter in Tinseltown with Josh Beckett on the shelf, and he had already been solid with the Phillies prior to being moved last week for a couple of minor leagues. Was this the Phillies’ idea of cleaning house? Hernandez (6-8, 3.83) has now posted three straight quality starts, issuing just one walk in 21 innings.

Garrett Jones, 1B/OF, Miami Marlins (ESPN: 23 per cent owned; CBS: 43 per cent): Jones has always had pop, and belted his 12th home run of the season last weekend. He has tailed off a tad since surging at the end of July, but his 738 season OPS is a good indicator of his value.

Trevor Plouffe, 3B, Minnesota Twins (ESPN: 16 per cent owned; CBS: 46 per cent): Like Jones, Plouffe is always capable of providing the long ball. He has just eight on the year, including a three-run shot Thursday against San Diego, but more importantly, he is on fire in August with a .429 average to raise his season mark 30 points to .249. Plouffe has been very productive, driving in seven runs in the last week.

Mark Reynolds, 1B/3B, Milwaukee Brewers (ESPN: 18 per cent owned; CBS: 35 per cent): Welcome back to the Wire Troll, Mr. Reynolds. At times he’s capable of carrying an offense with the home run ball, and though he has just one in August, he’s got 19 for the season to accompany a .415 slugging percentage. Right now, Reynolds makes for a nice power bat to add to your bench and when he heats up — get him in there.

Jose Ramirez, SS/2B, Cleveland Indians (ESPN: unowned; CBS: 1 per cent): Ramirez has taken over at short since Asdrubal Cabrera was traded, and while the 21-year-old Dominican hasn’t exactly done much with the bat, he enjoyed a breakout game Saturday with three hits, including a two-run homer, and a steal. In 60 games at Triple-A, Ramirez was enjoying a huge season, batting over .300 with modest power and nice speed. He’s worth a speculative add in AL-only leagues.

By Michael Seff
Tags: Albert Pujols
This entry was posted on Sunday, August 10th, 2014 at 12:43 pm and is filed under BASEBALL, Michael Seff, The Wire Troll. You can follow any responses to this entry through the RSS 2.0 feed. Both comments and pings are currently closed.