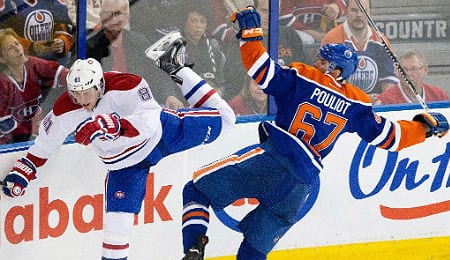 The playoffs have arrived and it’s “do or die” time. For instance, we found ourselves down 7-9 going into Sunday with just two players left to play, so we made moves late Saturday to add skaters in time to play the following day. Will that be enough? Are you willing to do anything to ensure a win in your Fantasy league? If so, you might want to look at the players below.

Benoit Pouliot, LW, Edmonton Oilers (ESPN: 2.4 per cent; CBS: 8 per cent): Edmonton may struggle just to win a game, but that doesn’t mean its forwards aren’t hot (see video below). Jordan Eberle and Ryan Nugent-Hopkins have both been on fire lately, but so is Pouliot, a former fourth overall pick Minnesota dearly wishes it could have back (the pick, not the player). When we say that, we’re not kidding – Carey Price, Devin Setoguchi, Anze Kopitar, Marc Staal, Tuukka Rask, T.J. Oshie, James Neal, Paul Stastny – the list of great players selected after Pouliot goes on and on. However, while he may be a bust in comparison to the other names drafted before and after him, that hasn’t stopped the winger from quietly putting together a solid if unspectacular NHL career.

In 419 career games, Pouliot has 92 goals, 186 points and a plus-47 rating over the course of nine seasons with Minnesota, Montreal, Boston, Tampa Bay, New York (Rangers) and Edmonton. His best points-per-game season came in the lockout shortened 2013 campaign with the Lightning in which he collected eight goals, 20 points and a plus-8 rating in 34 games. In regards to his highest number of points per season, Pouliot set a career high of 36 (15 goals, 21 assists) and seven power play goals in 80 games with the Rangers last season. A solid playoff run with five goals, 10 points and a plus-8 rating in 25 postseason games elevated him as an intriguing option on the free agent market.

Edmonton bit and, while he hasn’t been a revelation, he has been able to produce consistent Pouliot-like numbers for the Oilers. Currently on a five game point streak, the big (6’3″, 193 pound) winger has three goals and six points in that span with 16 goals, 26 points and a plus-2 rating on the season. He’s obviously not a long term option, but he’s the ideal guy at this point in the season when you just need warm bodies who have indicated they can score in the past few games. Go for it.

Marko Dano, C/RW, Columbus Blue Jackets (ESPN: 5.3 per cent; CBS: 7 per cent): Speaking of guys who have shown they can score recently, look no further than Dano – a rookie forward who has done surprisingly well for Columbus this season. In 26 games, the youngster has seven goals, 14 points, a plus-6 rating and 64 shots on goal (an average of 2.5 per game). He has three goals, seven points, a plus-6 rating, 17 shots on goal and 20 hits in his past seven games.

Drew Stafford, RW, Winnipeg Jets (ESPN: 7 per cent; CBS: 24 per cent): Stafford has been solid since coming over from Buffalo in the Evander Kane trade. After collecting nine goals, 24 points and a minus-18 rating in 50 games with the Sabres, he’s scoring at nearly a point-per-game pace with six goals, 13 points and a plus-3 rating in 16 games with the Jets. That’s very solid production, and we suggest you jump on this guy. Last week, Stafford had a goal, five points, a plus-5 rating, seven shots on goal, a face-off win and two hits.

Brandon Pirri, C, Florida Panthers (ESPN: 7.1 per cent; CBS: 20 per cent): It’s hard to believe we’re recommending a guy who has just two apples on the season, but when he’s deposited 17 biscuits in the basket, we guess it’s forgivable. Pirri has emerged as a top young goal scorer for Florida with eight goals (three on the power play and two game-winners), a plus-2 rating, 46 shots on goal (4.2 per game) and six hits in his past 11 games. He had three goals, a plus-1 rating, a game-winning goal, 20 shots on goal, five face-off wins and four hits last week.

Milan Michalek, LW/RW, Ottawa Senators (ESPN: 9.2 per cent; CBS: 24 per cent): The Sens have been outstanding lately thanks to the exceptional goaltending of outstanding undrafted rookie Andrew Hammond, but Michalek’s production has been less than satisfactory in that span. However, Michalek did have a solid Week 23 with a goal, three points, a plus-2 rating, four penalty minutes, 13 shots on goal, five hits and four blocked shots. He has 13 goals, 34 points and a plus-3 rating in 66 games played this season.

No. 1. Carey Price, G, Montreal Canadiens: Price has been nothing short of a, ahem, “stud” this season, and he’s destined for some end-of-season hardware in the near future. He had two wins, three goals against for a 1.00 goals against average, a .968 save percentage and two shutouts in three starts last week. If you have Price in a keeper league — well — we’re pretty sure you know what to do.

No. 2. Ondrej Pavelec (I know, right?!), G, Winnipeg Jets: Pavelec has never been a legitimate No. 1/2 option in Fantasy hockey. He’s way too inconsistent and has had injury issues in the past. However, at this point in the season, he just might save your bacon. Pavelec had three wins, three goals against for a 0.97 goals against average, a .970 save percentage and one shutout last week.

No. 3. Jordan Eberle, RW, Edmonton Oilers: Eberle makes our list for the second week in a row, and there’s a good reason why — he was pretty darn awesome. The talented youngster led all Fantasy skaters with two goals, six points, a plus-5 rating, two power play points, a game-winning goal, nine shots on goal, three hits and a blocked shot.

No. 1. Jonathan Bernier, G, Toronto Maple Leafs: The Leafs have S-T-Ruggled since Christmas, no doubt about it. As such, so have their goaltenders. Bernier — the former backup to Jonathan Quick in sunny L.A. — has failed to really live up to the promising career his play in SoCal seemed to foretell. Is it Toronto? Is it him? Either way, it’s not good. He had no wins, a 4.59 goals against average and an .882 save percentage in parts of two games last week.

No. 2. Ray Emery, G, Philadelphia Flyers: Emery may be a No. 2 goaltender in the NHL, but that doesn’t necessarily mean he’s actually good. He had zero wins, a 3.20 goals against average and an .889 save percentage in three appearances last week. His season numbers are even worse — 10 wins, 3.15 goals against average and a .892 save percentage — WOOF.

No. 3. Anton Khudobin, G, Carolina Hurricanes: “Dobby” will probably never break out as a legitimate No. 1 netminder in the best league on the planet, but it doesn’t help that he’s playing for a Hurricanes squad looking to rebuild and rise from the ashes. He had one win, a 2.40 goals against average and a .907 save percentage in four appearances last week.

And that’s it for our coverage this week. How did you do? Did you make it to your league’s semifinals? Tell us in the comments section below.

By Dakota Case
Tags: Benoit Pouliot
This entry was posted on Sunday, March 22nd, 2015 at 10:55 pm and is filed under Dakota Case, HOCKEY, The Wire Troll. You can follow any responses to this entry through the RSS 2.0 feed. Both comments and pings are currently closed.