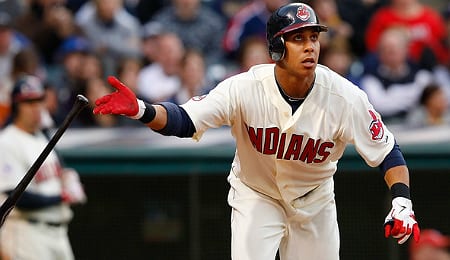 With a double on Tuesday, Arizona first baseman Paul Goldschmidt has now hit safely in eight straight games as he’s managed to slightly build on his breakout numbers from last season — at least from a slash line perspective. Okay, he’s unlikely to match the 36 homers (tied for NL lead) he smoked last year, but he’s on pace for 60 doubles. Yes, you read that right.

Selected as the NL All-Star at first base over a talented crop including Adrian Gonzalez, Matt Adams, Anthony Rizzo and Joey Votto, Goldschmidt has developed into a real stud, considering how unhyped he was coming up through the minors. Hard to believe but true, Goldschmidt was never among Baseball America’s top 100 or BA’s top 10 Arizona prospects. How the hell did he slip through the cracks?

Goldschmidt’s ISO is slightly below what he put up last year, he remains a DH waiting to happen (which won’t be easy as long as he’s a D-Back), and we wonder if we’ve seen the best he has to offer. With a flyball rate that just keeps dropping, it’s hard to envision him topping his 2013 homer total unless that trend reverses itself.

In our Outfield Rankings heading into the season, we suggested that Carlos Beltran could outproduce several notable outfielders, including Michael Brantley. Oopsie.

Brantley has been out of mind good this year, and it’s high time we gave his first half a shout out after he smacked three hits Tuesday — including two doubles and his career-best 14th dinger — for a fifth straight multi-hit effort.

Through 85 games, he now has 60 RBI, putting him on pace to flirt with 110 for the year and easily smash his personal best. Amazing, Brantley’s power burst has come with improved contact skills — an incredibly rare combination to grow together. He hasn’t forgotten how to swipe bases, either, and is on pace to top his career high in that department as well.

Small wonder MLB players voted him into the All-Star Game, and according to the video below, he’s pretty stoked to be headed there.

A 920 OPS? Brantley is one of the breakout stars of 2014 and if you scooped him late in your draft, chances are you’re doing pretty darn well in your Fantasy baseball league.

Jay Bruce, who has dealt with both injuries and ineffectiveness this season, is starting to make some noise. He homered in three straight games this week, and while he failed to go yard in the second game of a double header Tuesday, he still drove in a pair for his fourth straight multi-RBI game. If you’ve owned Bruce before, you know how streaky he can be, so now’s the time to pounce before the buy-low window slams shut.

Now it’s your turn. Let us know in the comments below how many homers you think Paul Goldschmidt will wind up with this season.

Crave more in-depth Fantasy analysis? Then join us every Thursday at 9 p.m. EST for RotoRob Fantasy Baseball Weekly Podcast on Blogtalkradio as we entertain and edify you for an hour or more each week. This week, RotoRob is joined by Joel Henard of the Fantasy Insiders. We’ll be examining how Will Smith has emerged as one of the game’s top set-up men. Tune in here.

By RotoRob
This entry was posted on Wednesday, July 9th, 2014 at 1:16 pm and is filed under BASEBALL, Fantasy Notes, RotoRob. You can follow any responses to this entry through the RSS 2.0 feed. You can skip to the end and leave a response. Pinging is currently not allowed.