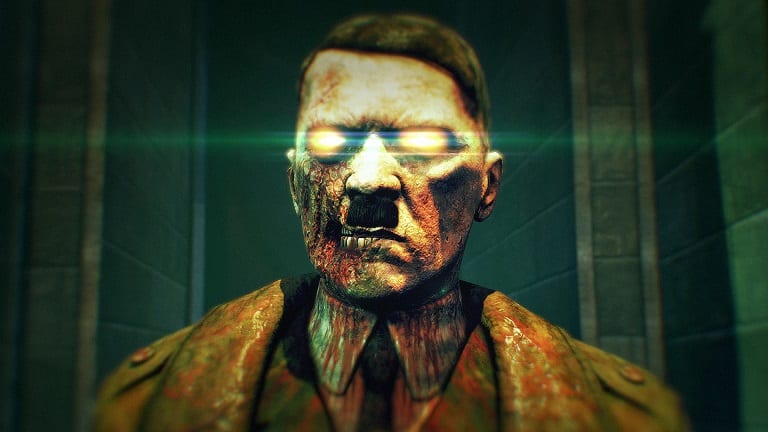 With Allied forces persistently pushing back the Axis Front, Hitler has one Ace still hidden up his sleeve: Unleash a horde of zombies to secure German victory at the highest cost. Rebellion, the folks behind the Sniper Elite games, wants you to take aim as one of several playable characters and jam some lead into squishy zombie skulls in the Zombie Army Trilogy!

Tapping or holding the circle button will adjust your stance from crouching to prone, but you’ll be spending much more time running and clicking the left stick to sprint away. As you’re running about, you can pull up an inventory/weapon wheel with R1 and toss grenades and distraction items with L1. Altogether the default control scheme is about as perfect as you can get, but you’ll likely want to adjust the default look sensitivity, as it can make non-scoped shots a bit sloppier than they should be.

While Zombie Army Trilogy does look good and run well, the eerie atmosphere before you is the show stealer. Pea soup fog, reminiscent of Turok, shrouds the wandering hordes of zombies while dead, splitting trees stab into the sky.

The various zombie types you encounter shamble clumsily, sometimes hastily, towards you at all times. The war-torn SS gear that the zombies don is grimy and complements their garish and rotting flesh nicely.

The frame rate is generally consistent but can (and will) get choppy while detonating explosives in large groups of enemies or when running among complex scenery, but it remains extremely playable throughout.

The sound design is a mix of good and bad. Gunshots and explosions sound snappy and forceful, and zombies sound breath-y and raspy. The trouble with the zombie sound effects is that they are ear-splittingly loud no matter how close or far they may be, which is not only confusing to the ears but just plain bewildering when trying to figure out where the hell the screaming is coming from. The orchestral score is well done, but it’s nothing too epic and doesn’t really stand out as a paramount feature.

Unfortunately, this is the department that suffers the most. As it’s a trilogy, the action is broken into three “chapters” woven together with bare-bones explanations and directives. Going from point A to B summarizes the game’s mission structure, with a few boss fights tossed in for good measure.

Mission structure issues aside, it’s still extremely fun placing bullets into zombies with cinematic cameras, complete with X-ray vision, and setting traps for the more aggressive ‘zeds, but it really has to be done with other people to be truly enjoyable.

If Zombie Army Trilogy had been given a bit more refinement and some updates to the variety of gameplay, it’d truly have been a stellar title. But with the vicious competition on the zombie market these days, it just doesn’t have enough stand-out features to drive many players to purchase it, unless a group of like-minded buddies are eager for some intense third-person zombie-poppin’ action.

By Jeff Cater
Tags: Adolph Hitler, Sniper Elite
This entry was posted on Monday, March 23rd, 2015 at 6:44 pm and is filed under Jeff Cater, Video Game Reviews. You can follow any responses to this entry through the RSS 2.0 feed. Both comments and pings are currently closed.