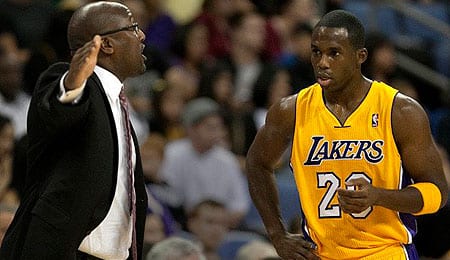 Jodie Meeks (right) has really taken off since Mike Brown (left) was fired.

T’was another fun week in the world of roundball as Carmelo Anthony got the boot and his Knicks lost to the Bulls; over on the west coast, the Clippers look unstoppable, winning a franchise record 12 straight games; Larry Sanders continues to establish himself as a serious interior force for the Bucks, who are starting to roll, with six wins in the past eight games to put some distance between themselves and the Nets in the Eastern Conference playoff picture; and Dallas’ rotation has been a mess, meaning we’d avoid most fringe Mavericks for the time being.

Oh, by the way: if any of your fringe players have a date with Charlotte (next week, that includes Miami, Brooklyn and New Orleans), make sure they are active, because the Bobcats are defensive sieves right now.

Jodie Meeks, SG, Los Angeles Lakers: Signed by the Lakers as a free agent this summer, Meeks has suddenly taken over as the Lakers’ Sixth Man, seeing significant PT off the bench, including a season-high 39 minutes Tuesday. He’s hoisting treys like the Mayans are coming, continues to be a lights-out FT shooter and has scored at least a dozen points in four straight games. Meeks has never had much star power, but you’ve got to grab him while he’s rolling.

Shaun Livingston, PG, Washington Wizards: It’s been over a year and half since Livingston last popped up on the radar, but he’s getting a chance to start with Bradley Beal out. Just signed as a free agent a few weeks ago, Livingston is still trying to find his game in Washington, but Friday he showed some life with nine points and six boards – in 36 minutes. The PT jumps out at us, and you’ve got to figure the production will follow. Okay, so this dude will never live up to being the fourth overall pick in 2004, but until John Wall returns, Livingston is going to get some burn.

Mario Chalmers, PG, Miami Heat: The Heat’s starting PG has shaken off his finger injury suffered earlier this month and is seeing more PT lately as he continues to prove he’s a better offensive player than youngster Norris Cole.

Alexey Shved, PG, Minnesota Timberwolves: Shved earns another recommendation after snapping a mini slump with a double-double Thursday. If he keeps getting more touches, he’ll work his way into the ROY discussion.

John Salmons, SF, Sacramento Kings: Last season, we wondered why the Kings kept giving Salmons minutes when they needed to build towards the future. Well, he keeps getting the burn as a starter in Sactown and while he’s only a deep league special for now, every now and then, he comes up with a gem. Two weeks ago, he torched the Trailblazers for 19 points with 11 dimes; Wednesday, he lit up the Warriors for 17 points, six boards, five assists, a block and a steal. And while his offense went cold Friday, Salmons did drop another four dimes with a block and a trey. His FT shooting hasn’t been great lately (for him), but the vet is taking more shots from beyond the arc and is getting enough PT (especially with Tyreke Evans out) to provide help in deeper formats.

Matt Barnes, SF, Los Angeles Clippers: In January, we recommended Barnes as a wire option and it was a decent call as he saw nice PT in January, got fewer touches in February, nailed more treys In March and then finished strong in April. Now he’s getting it done as the Sixth Man for the Clippers, playing 30 minutes Friday, nailing his fourth trey in three games, continuing his near flawless work at the line, pulling down five boards for the second straight game and racking up a sixth straight double-digit scoring effort while blocking three shots (his seventh straight game with at least one swat). Barnes is canning the field goals of late, and he’s remained moderately healthy so far this season. As long as he’s consistently getting double-digit touches per game, he’s worth a look.

Kawhi Leonard, SF/SG, San Antonio Spurs: Leonard returned from his knee injury Friday and looked solid off the bench. You better grab him while you can.

Lamar Odom, PF, Los Angeles Clippers: Has anyone noticed that Odom’s PT is way up of late? On Friday, he flirted with a double-double and blocked three shots.

Gustavo Ayon, C/PF, Orlando Magic: In late-February we recommended Ayon and that pick bore fruit in March when he got more touches before his PT faded down the stretch. Well, with Glen Davis (shoulder) out for the next 4-to-6 weeks, Ayon is getting another chance as the first big off the Magic bench. On Friday, he put together a double-double with a steal in a season-best 28 minutes. Ayon was very efficient Friday (4-for-4 from the field, 4-for-6 from the line) and high FG percentages are nothing new to this dude, so give him a look if you need big man help.

Tristan Thompson, C/PF, Cleveland Cavaliers: Yes, he’s taking advantage of Sideshow Bob’s absence, but the fact of the matter is that Thompson is developing into a very solid player for the Cavs.

Lavoy Allen, C/PF, Philadelphia 76ers: Allen has been starting most of the season, but in the past couple of games, the PT has more befitted a starter and he’s pitching in on the glass, making him worth a look in very deep formats.

By RotoRob
This entry was posted on Saturday, December 22nd, 2012 at 3:27 pm and is filed under BASKETBALL, RotoRob, The Wire Troll. You can follow any responses to this entry through the RSS 2.0 feed. Both comments and pings are currently closed.