The Wire Troll: Ben Gordon Lighting it up for Cats 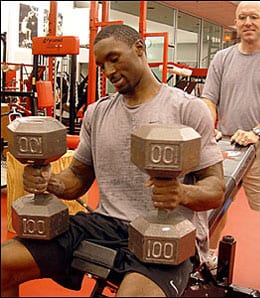 Ben Gordon has been pulling his weight for the Bobcats.

Welcome back to another week of the NBA Wire Troll, where we only recommend players owned in 50 per cent of leagues or less. It was another fascinating week on the hardwood courts as the NBA did not take kindly to the Spurs suddenly sending their best players home before their only regular season visit to Miami; the Lakers went hog wild from downtown to crush the Nuggets; and Amare Stoudemire is eyeing Christmas Day for his return, so he needs to scooped up in any leagues in which he’s still sitting on the wire.

Ben Gordon, SG, Charlotte Bobcats: We recommended Gordon when he got hot in late March and it was a nice call as he had his best shooting month of the season in April. This season, Gordon has moved to the Bobcats and his offense has helped turn around what was the worst team in the NBA. He’s been especially useful while Gerald Henderson is out, pouring in a team high 26 points Wednesday and then jacking up 15 shots en route to 19 points Friday – again leading the Cats in scoring. Gordon has canned 15 treys over the last four games, and even if he’s strictly a bench player who doesn’t play as much at this point in his career, he can still help your Fantasy team.

Derek Fisher, PG, Dallas Mavericks: In Late-January, we recommended Fisher and it wasn’t a bad call as he played more that month before seeing a dip in PT in February and then another boost in March. Now all of a sudden, the Dallas Mavericks have signed the free agent to help their depleted backcourt, and Coach Rick Carlisle has anointed the 38-year-old as his new starting PG, sending Darren Collison to the bench. Realistically, Fisher is there in a mentoring role, and isn’t likely to have value beyond 16-team leagues or larger, although he’s still a tremendous FT shooter.

Gary Neal, PG/SG, San Antonio Spurs: Yes, Danny Green has struggled lately and took a DNP with the rest of the Spurs’ stars Thursday, but Neal’s team-high 20 points with seven dimes was a reminder of what he’s capable of.

Josh Howard, SF, Minnesota Timberwolves: In early-February, we recommended Howard and while he didn’t see that much action at first, he got enough burn in March to be quite useful. Signed by Minny as a free agent a couple of weeks ago when the T-Wolves’ backcourt was falling to injuries, Howard finds himself starting with AK-47 out on a day-to-day basis, so he looks like a nice short-term option in deeper formats. In the last two games, Howard has averaged 25 minutes, 7.5 points, 0.5 treys, 3.5 boards, 1.5 assists, 1 block and half a steal. That has value in a big league.

Kyle Singler, SG/SF, Detroit Pistons: Admittedly, we hadn’t paid much attention to Singler prior to this season, but he’s starting to demand our scrutiny now. He’s headed into a juicy four-game week and has responded well (12 points per game) since moving into the Pistons’ starting five a couple of weeks ago. The rook had his first career double-double Monday and has enjoyed three straight multi-steal efforts. There were questions whether he’d be a SF or PF in the NBA, but right now, he’s finding himself as Detroit’s starting two-guard, but he still qualifies as a forward for Fantasy purposes.

Antawn Jamison, PF, Los Angeles Lakers: Jamison has suddenly morphed into a major contributor on the Lakers, going off for 33 points and 12 boards on Friday. Could he take over as the starting PF for Pau Gasol? It’s not out of the realm of possibility.

Steve Novak, SF, New York Knicks: Need treys? Novak had eight in two games last weekend, was shut out Monday, but has another eight in the two games since.

Andray Blatche, PF/C, Brooklyn Nets: One of the key acquisitions in a busy offseason for the Nets, Blatche took advantage of foul trouble from some of his teammates Wednesday to go off for 17 points and 13 boards. However, now that Brook Lopez is out, Blatche is starting and looks a lot more attractive, and he just missed another double-double Friday, adding a block. Remember what Blatche did as a full-time starter in Washington two seasons ago? Coach Avery Johnson is showing a bit of faith in him, and that could really reap benefits for shrewd Fantasy owners.

Timofey Mozgov, Denver Nuggets: Heading into the season, Mozgov was 36th in our Centre Rankings, but he hasn’t even been a top 75 centre so far. However, we had some signs of life on Friday as he played 21 minutes, responding with six points, seven boards, an assist and a steal. It’s even conceivable that Mozgov has passed the frustrating to own JaVale McGee on the depth chart. At any rate, in a very deep league, it’s worth a flier to see if Mozgov can build on this game.

Jermaine O’Neal, Phoenix Suns: Yes, he’s 34 with the body of a 54-year-old and still isn’t playing enough to really do major damage, but JO needs to be on your radar if for no other reason than he’s had six straight multi-block games. Oh and yes, we’re only a few weeks into the season and centre is already a Fantasy wasteland. Hey, we’re trying here…

Andre Drummond, Detroit Pistons: The Pistons’ other key rookie has taken a back seat to Singler so far, and while he’s still not consistently getting enough PT off the bench to be a difference maker, he’s averaged 9.4 boards over the last five. Keeper league Fantasy owners have to be salivating over Drummond’s per minute board averages.

By RotoRob
This entry was posted on Saturday, December 1st, 2012 at 12:22 pm and is filed under BASKETBALL, RotoRob, The Wire Troll. You can follow any responses to this entry through the RSS 2.0 feed. Responses are currently closed, but you can trackback from your own site.