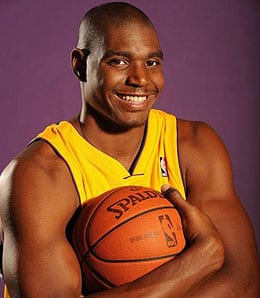 Andrew Bynum is the new number one option in Philly.

We wrap up the 2012-13 RotoRob NBA Draft Kit today with our final cheat sheet. So while you wonder whether James Harden can help turn the Rockets around, let’s take a look at the top 40 centres in Fantasy basketball.

Just like the Power Forward slot, Centre is deep this season. Obviously, you’re looking for boards, blocks and FG percentage here and – ideally – someone who doesn’t bring your FT numbers down too far. Keep that in mind if you wind up with Dwight Howard – either surround him with high percentage shooters or just screw the cat altogether. There are plenty of stud vets like Big Al, Andrew Bynum and Superman, next wave stars like DeMarcus Cousins and Greg Monroe and potential stars in the making (Anthony Davis, Nikola Pekovic and Jonas Valaniciunas) to choose from.

1. Al Jefferson, Utah Jazz (3): Is there a better low post player in the game?

4. DeMarcus Cousins, Sacramento Kings (14): The third-year big man has mad across the board skills.

5. Marc Gasol, Memphis Grizzlies (10): Can the All-Star centre help Memphis take the next step in the playoffs this season?

9. Chris Bosh, Miami Heat (9 at PF): People clued in to how important Bosh is to Miami when the Heat struggled after he got hurt.

10. Roy Hibbert, Indiana Pacers (16): The addition of David West gave Hibbert more room to do his thang down low.

11. Joakim Noah, Chicago Bulls (7): The absence of Derrick Rose for the first half of the season opens the door for more opportunities for Noah to bounce back offensively.

12. Kevin Garnett, Boston Celtics (15 at PF): Garnett re-upped with the Celtics for a final push for another title.

13. Tyson Chandler, New York Knicks (15): Chandler’s knee woe is not serious, but he could be a tad rusty to start the season.

14. Anthony Davis, New Orleans Hornets: The No. 1 pick in this year’s draft is poised to make noise.

15. JaVale McGee, Denver Nuggets (12): The Nuggets gave him a huge deal; now let’s see if McGee can live up to it off the bench (at least to start the season).

16. Brook Lopez, Brooklyn Nets (19): Lopez’s ability to bounce back – and become a better rebounder – is central to the Nets’ chances of making progress in the East.

18. Nikola Pekovic, Minnesota Timberwolves (NR): This is one tough big man who is only going to get better.

19. Andrew Bogut, Golden State Warriors (8): Bogut is questionable to start the season on time because of his ankle.

24. Emeka Okafor, Washington Wizards (18): The durable Okafor is one of the game’s hardest workers.

By RotoRob
This entry was posted on Tuesday, October 30th, 2012 at 9:26 am and is filed under 2012-13 RotoRob NBA Draft Kit, BASKETBALL, Cheat sheets, RotoRob. You can follow any responses to this entry through the RSS 2.0 feed. Both comments and pings are currently closed.