The Wire Troll: And They’re Off… 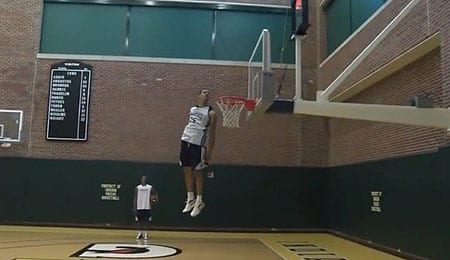 Yes, freakishly athletic Gerald Green can jump high enough to look down on the rim.

Welcome back to another season of the NBA version of The Wire Troll, our weekly waiver wire recommendations column designed to help guide you to Fantasy basketball glory.

We’ll be with you all season long and always try to focus on players that are owned in 50 per cent of leagues or less, so that these are options that are realistically available to most owners. We’re not afraid to dig deep to find you those hidden gems.

The 2012-13 season’s opening week – even while truncated – had its share of drama, including Tony Parker’s buzzer beater, trouble with the Lakers (already!) and the rescheduling of the Nets-Knicks season opener thanks to a hurricane named Sandy.

Okay, let’s get to our debut selections of the season!

Gerald Green, SG, Indiana Pacers: Our 31st-ranked small forward heading into the season is quickly rising up the ranks thanks to Danny Granger’s knee injury. Green has moved into the starting lineup at the two guard slot and has played 34.5 MPG over the first two contests. Okay, so the numbers haven’t been impressive yet (although the 1.5 treys and one block per game are sweet), but if Green keeps getting that much burn, he’ll produce, so be proactive and grab him now. Granger is out indefinitely, so Green could be a useful player for a very long time. He has a chance to be one of the early season pleasant surprises.

Steve Blake, PG. Los Angeles Lakers: With Steve Nash (leg contusion) out, Blake is a low-end option in deeper leagues. Nash is day-to-day, so picking up Blake is just a short-term solution. In his start Friday, Blake managed eight points and a couple of treys in 39 minutes before fouling out. There’s no doubt that the dropoff from Nash to Blake is precipitous, but if you desperately need immediate help at guard, Blake is worth a look.

A.J. Price, PG, Washington Wizards: Price didn’t shoot well in his debut, but he’ll be the running the point in Washington while John Wall is out (until at least the end of the month).

Chandler Parsons, SF, Houston Rockets: We ranked Parsons inside the top 30 among small forwards heading into the season, but in the early going he’s looking like a top 20 option at the position. He’s averaging 36.5 MPG through the first two and has had at least five points, five boards and five assists in both games, while nailing a trey in each contest. The shooting leaves something to be desired so far (under 28 per cent) but Parsons – who added three steals Friday – looks like a fine across-the-board producer worth nabbing in all leagues.

Al-Farouq Aminu, SF, New Orleans Hornets: We ranked Aminu as a top 40 small forward in the preseason, but he’s looked like a top five in the early going. This dude is exciting Hornet fans with his athleticism, averaging 16 points, 7.5 boards, two steals and 1.5 blocks while shooting a superb percentage from the field over the first two games. Wow. New Orleans may regret declining Aminu’s 2013-14 contract; he’s been flying off the wire this week, so move quick if you want him.

Dorell Wright, SF, Philadelphia 76ers: Wright is the top wing option coming off the Sixer bench and while he didn’t shoot well in the opener, he contributed a nearly across-the-board sweet line of 14 points, seven boards, two steals, two treys and a block.

Marvin Williams, SF, Utah Jazz: His opener (21 points on 7-for-13 shooting) was the top end; his second game (five points on 2-of-8 shooting) is the low end. Consistency is not his thang, so consider that if you pick him up.

Tristan Thompson, C/PF, Cleveland Cavaliers: We ranked Thompson among the top 30 power forwards heading into the season, and while he hasn’t quite lived up to that billing yet, he’s been damn close. The second-year big man put up a double-double in his first game of the season while adding a surprising five dimes, and while he wasn’t as sharp in his second game (okay, that’s an understatement), it’s clear he’s improved his understand of the game and is poised to take a big step forward this season. Once Thompson establishes some consistency, look out.

Brandan Wright, Dallas Mavericks: Dallas is suddenly a lot younger, and the 25-year-old Wright – a constant underachiever – is a big part of this youth movement. With both Dirk Nowitzki and Chris Kaman out, the Mavs have been forced to go even younger, giving Wright a chance to start. He’s taking advantage, putting up an impressive 14 points, five boards and three blocks in just 20 minutes in the opener and then getting more burn (26 minutes) in the second game, coming through with 15 points and another couple of blocks. The dude has canned 12-of-13 shots so far. Holy frig! Be aware that Kaman may be ready to return Saturday, but Wright has done enough in the early going to earn himself rotation time going forward.

Robin Lopez, New Orleans Hornets: Lopez is starting in Nawlins, and has built on a big preseason with a pair of fine efforts including a 19-point showing Friday. Grab him while you can.

J.J. Hickson, Portland Trail Blazers: Hickson’s been getting dumped in lots of leagues, but why? All he’s done is record double-doubles in both games so far while swatting a pair of shots in the opener. If his PT rises, he’ll be a serious beast.

By RotoRob
This entry was posted on Saturday, November 3rd, 2012 at 12:35 pm and is filed under BASKETBALL, RotoRob, The Wire Troll. You can follow any responses to this entry through the RSS 2.0 feed. Both comments and pings are currently closed.