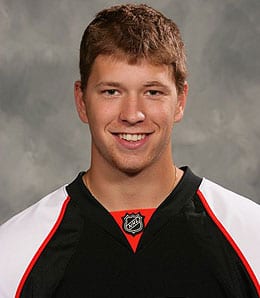 Claude Giroux’s breakout was no fluke.

The 2013 RotoRob NHL Draft Kit surges forward with the release of another cheat sheet today. So while you wonder how Lubomir Visnovsky will do once he’s back in the NHL, let’s peruse our picks for the top 35 centres in Fantasy hockey.

A healthy Sidney Crosby could be so important to the fortunes of the Pittsburgh Penguins. His production feeds into almost the entire remainder of the team. More importantly, if Crosby lasts the season, he is a near 100-point player and Evgeni Malkin is one. However, with the 48-game season, expectations do have to be lowered at least a little bit.

The centre position has so many players in the 35-to-45 point range it’s not funny. So relax and just think before drafting. Take one Tier One centre and then slide down for depth if you have to. You won’t regret it. The key in drafts is to realize centre is a position of relative depth and if one of your guys plays another forward position, it’s just a bonus. Keep that in mind. This will not be an easy season to gauge but, again, an emphasis will be placed on obstruction rules so power play points may be up, among forwards especially. Let’s do this!

1. Evgeni Malkin, Pittsburgh Penguins (4): The guy does his most lethal work on the weekends, tallying nearly half his points in the last two seasons away from the normal workweek. Last season, Malkin racked up 52 of his league-leading 109 points on Saturdays and Sundays. He was a 50-50 guy and in a shortened season… a 30-30 season or something relatively close would not be that shocking this season. The knee problems are in the past and the future is filled with a player who is the best Fantasy performer in all the land.

2. Steven Stamkos, Tampa Bay Lightning (1): Stamkos is a 60-goal scorer, yet there are some wondering if the “Gary Roberts workout” had a harmful effect on his scoring touch. We are going to find out soon enough. He really is the one guy who could potentially score 35 goals in this shortened schedule. There may be a few others, but with the four forward power play unit Tampa will trot out (Martin St. Louis, Teddy Purcell, Ryan Malone, and Stamkos), anything could be possible. It is not going to be easy, but Stamkos looks like he could be a 60-point player this season.

3. Sidney Crosby, Pittsburgh Penguins (7): The concussion issues of last season are gone and Crosby will be paired with his usual scoring buddies Pascal Dupuis and Chris Kunitz, both of whom he definitely has chemistry with. There are still questions about Crosby’s health because as we all learned with Eric Lindros, all it takes is one hit. Again, he is another one of those 60-point guys with 25+ power play point talent especially when he is double shifted with Malkin. If Crosby plays 48 games, it’s like taking candy from a baby.

4. Claude Giroux, Philadelphia Flyers (NR): Keep in mind that Giroux may not qualify at centre in every league, so please check accordingly. His 65-assist, 93-point season was not a fluke, but will he take a hit without Jaromir Jagr in town? He might, but he might not. Either way, Giroux will get his points no matter who is paired with him. He is the focal point of the offense and with lots of rivalry games, that should help him thrive and feast on the Eastern Conference.

5. Henrik Sedin, Vancouver Canucks (2): It was a bit of a tough season, goal-wise, for this Sedin twin (14), but he did have a whopping 67 assists. The problem this season is Vancouver’s second line is decimated with injuries which will put pressure on the twins to score. Can Daniel and Henrik recapture the magic and who will play on the other wing? Our guess is Alex Burrows and that means good news for Henrik. That is good news for Henrik’s owners as well.

6. John Tavares, New York Islanders (24): Tavares was a point per game player last season and could take another slight step upward in the shortened season. His connection with Matt Moulson and Kyle Okposo at the tail end of the 2011-12 campaign was very telling and this is the trio that will start from Game One. Tavares does get mired in some scoring slumps, but when he is on, he is among the best forwards in the game. Islander and Fantasy hockey fans alike have plenty of reasons to be bullish this season.

7. Jason Spezza, Ottawa Senators (28): Spezza’s second half spike last season has been well documented on various sites including The Hockey Writers and Dobberhockey, and he wound up with 84 points on 34 goals and 50 assists. It will be interesting to see how he fares this season. With only 48 games, Spezza obviously cannot pull off a 50-point second half like he did last season. Time will tell if we get first or second half Spezza. One thing is for sure, Ottawa is going to need him and Fantasy owners will too.

8. Jordan Eberle, Edmonton Oilers (NR): Fantasy owners have to love the new qualifiers at the centre position. Eberle is another one of those point per game guys that is ready to play and take a step upward. Playing with Taylor Hall and Ryan Nugent-Hopkins does not hurt either. Add in Nail Yakupov and Justin Schultz and you have a five man power play unit that could make a Fantasy GM blush. Simply, here could be another 50-point centre, and it is almost getting to the point of being ho-hum.

9. Pavel Datsyuk, Detroit Red Wings (3): Only an injury kept Datsyuk from having another point per game season. Do you detect a theme here? We sure do. Playing with Henrik Zetterberg always helps, but Datsyuk is the true puck magician. Again, Detroit is going to need a little more offensive firepower and the health of its top two threats will be paramount to the team’s success. Datsyuk looked extremely dedicated while playing for CSKA in the KHL. That “game shape” should serve him well.

10. Anze Kopitar, Los Angeles Kings (5): Kopitar won a Stanley Cup and once he returns from injury, which should be a week or so after the regular season starts, he will definitely be ready to produce. The key will be how he runs with the star power he now possesses. This King, along with Dustin Brown and company should be able to wreak some havoc which is good for Fantasy owners because they took so long to get going last season.

11. Brad Richards, New York Rangers (6): Unlike Kopitar and his injury concerns, Richards has to deal with potential chemistry issues with Rick Nash and that could be something that drives both media and fans mad, at least for a little while. Granted, this duo will get things moving but the question will be when and maybe how consistently they do. Richards should have a better season with Nash, but will Marian Gaborik stay healthy? That may be the Rangers problem considering Nash has had a couple groin setbacks but is healthy now. Stay tuned!

12. Nicklas Backstrom, Washington Capitals (10): The only reason to hesitate is the concussion issue, but Backstrom has the potential to return Alex Ovechkin to prominence. When the two played together in the KHL, they made a near nobody (Leo Komarov) into a scoring threat. Just imagine what they can do in Washington. The Backstrom-Ovechkin duo is unshackled now with Adam Oates as coach. We’ll see how that works out for Fantasy owners. It should be an experience one way or the other.

13. Jonathan Toews, Chicago Blackhawks (9): Toews is ready for another “United Center Revival” as last season was a tough one. Chicago knows it has a low margin of error with its lack of defensive depth and inconsistent goaltending. Can Toews regain that scoring touch? The talent is there. Patrick Kane and Marian Hossa are still primed for a scoring increase. Toews still has top six or eight potential and his goal and assist in the opener was a great portent.

14. Joe Thornton, San Jose Sharks (15): In a position full of scorers, Thornton is gradually losing relevance on his own team which will eventually mean a decrease in scoring. If it does not happen this season, it will likely occur in 2013-14. Eventually, he will become a second line player and a second unit power play specialist. When the latter occurs it will have the biggest affect on his Fantasy numbers. Wait and see but for now, he is still near the top of his assists game at least.

15. Eric Staal, Carolina Hurricanes (12): Staal is so close to the top 10 in a full season I think he would get there but with Jordan Staal and Alexander Semin now along for the ride, it will take a little time to get that first unit power play chemistry going (especially with Tuomo Ruutu out for regular season). Carolina may go with a four forward alignment on the man advantage at times, so if “Captain Staal” can start off on a streak early, it may spearhead the rest of the season.

16. Ryan Getzlaf, Anaheim Ducks (8): Getzlaf owners should take last season’s tape and just burn before watching. It was an unmitigated disaster in every single way. Getzlaf went back into the gym during the offseason and worked on hockey coordination as well. Will it pay off? Certainly his on-ice acumen was called into question. Expect a bit of a trend upward for the Duck captain.

17. Tyler Seguin, Boston Bruins (NR): The only reason why we did not put Seguin into the top 15 is because Boston can get so balanced scoring wise at times that we think something in the neighborhood of 45 points is almost too high for him at this time. His talent and two way play is undisputed and the +/- is almost unfair. If you look at Seguin’s ceiling, it can be best described as a 1.1-to-1.2 points per game Fantasy producer. That’s damn good!

18. Henrik Zetterberg, Detroit Red Wings (6 at LW): For Zetterberg, check your leagues because some players like him are coming on and off multi-position eligibility. There are so many centres that can hit the 45-point threshold and this is another one. People just have to realize this position is just stacked so you can slide down a good bit while still finding talent that can fill your Fantasy roster. Zetterberg is still enough of a force to merit a top 20 ranking.

19. Ryan Nugent-Hopkins, Edmonton Oilers (36): The injury bug and a grueling schedule made us hesitant to put “The Nuge” a little higher up the ladder. Throw in the fact that he played at the WJC and how he became too much of a focal point. Will that happen this season in Edmonton? Not likely. The key is RNH has to be near the scoring areas without fear. If he can do that then he will be very successful. It is as simple as that.

20. Patrick Sharp, C, Chicago Blackhawks (19): Sharp is kind of where we thought he would be. Simply, if he plays 48 games, he will end up around 43 or 44 points. His defense will be a little shaky at times but the power play points will go up, so that should excite his owners. Just stay the course and remember — do not be shocked if Sharp is close to the 15-to-20 power play point range at season’s end.

Next up we will be heading over to the “wings” which are a weaker vessel as far as Fantasy production. With the truncated schedule, just expect some wild changes in the rankings. Thanks for reading and let us know what we can add and subtract.

By Chris Wassel
This entry was posted on Sunday, January 20th, 2013 at 12:24 pm and is filed under 2013 RotoRob NHL Draft Kit, Cheat sheets, Chris Wassel, HOCKEY. You can follow any responses to this entry through the RSS 2.0 feed. Both comments and pings are currently closed.