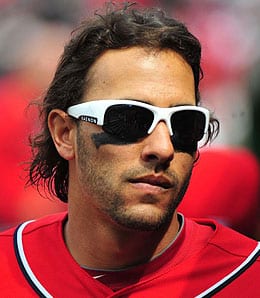 Seattle is banking on Michael Morse returning to his 2011 form.

Thanks to yet another Blogtalkradio SNAFU, this week’s episode of RotoRob’s Fantasy Baseball Weekly Podcast was almost deep sixed. If not for a yeoman effort by Chris Wassel to save the day, the show would have been toast. As it was, we got underway about 40 minutes late. D’oh! But hey, we made up for lost time by churning out some crazy good chatter.

Note that the show begins with the complete version of “Man in the Box” by Alice in Chains, which was being played as we tried to figure out what the fuck was going on. We finally kicked off the real show around the five-minute mark.

This included a look at:

Want to hear the show in its entirety? Of course you freaking do. Step one: Press play below. Step two: Enjoy.

By RotoRob
This entry was posted on Friday, January 18th, 2013 at 12:41 pm and is filed under BASEBALL, Podcast, RotoRob, RotoRob's Fantasy Baseball Weekly, Tim McLeod. You can follow any responses to this entry through the RSS 2.0 feed. You can skip to the end and leave a response. Pinging is currently not allowed.