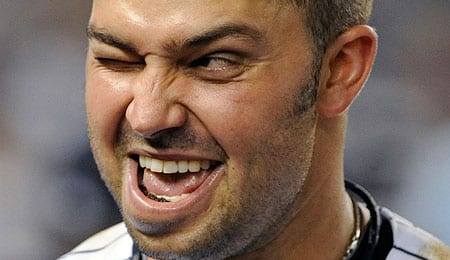 The Indians just gave a crazy man a contract potentially worth $70 million.

So how that’d that all work out?

An elbow injury – which we covered in a late-April Podcast when it seemed like outfielders were dropping like flies — limited him to 31 at-bats for the season, so Gardner wound up as barely a top 200 outfielder.

In mid-April, his elbow came up sore after a diving catch and it looked like he’d miss a few days, but he immediately wound up on the DL with an strained right elbow, a move which made it clear this was a more serious situation.

Gardner underwent an MRI, revealing a bone bruise and a strained extensor muscle. The prognosis was for him to wear a brace on his elbow and begin hitting again in a week and a half or so. All indications were that Gardner would return from the DL in early May as soon as he was eligible.

He was able to run and throw while on the DL – just not hit. A few days later, Gardner was cleared to take batting practice and he looked on track to return on schedule, perhaps after a very brief rehab assignment.

The BP session was delayed, but Gardner did take some swings in the cage and there was talk he’d take BP a couple of days later. Instead, it was more swings in the cage, with regular BP pushed back another day. These delays made it clear that Gardner wouldn’t return from the DL on schedule – especially since the Yanks really wanted him to go out on a rehab assignment.

The team was adamant he had not had a setback, however, things started to get worse from there. Pain in the elbow cropped up again and Gardner had to shut everything down for a couple of days. At the time, it looked like he’d need close to an extra week on the DL as a result.

From that point, it was a case of false starts and setbacks as Gardner kept teasing Fantasy owners with his return. He started a rehab assignment, and then had to shut it down again.

Sure enough, Gardner played on June 8 at Low-A, but he had another setback and this time was headed to the specialist. Uh oh.

He had to have a platelet-rich plasma injection, knocking him out another 3-to-4 weeks, a setback we discussed in a mid-June Podcast.

When he still hadn’t started another rebab assignment by mid-July, it was clear we weren’t going to see Gardner until August. A few days later, he played in a simulated game, but had yet another setback requiring yet another MRI.

On July 19, it was announced Gardner needed arthroscopic surgery on his elbow, supposedly ending his season. However, the team wound up activating Gardner on September 25, a move we expected would send Andruw Jones back to the bench.

Gardner wound up seeing action in seven games before the end of the season, going 1-for-3 and mostly being used as a pinch-runner.

Gardner played in two of the five games against Baltimore in the ALDS, but did not have an at-bat. Against Detroit in the ALCS, he played in three of the four games, going 0-for-8.

Obviously, it is next to impossible to draw conclusions based on a 31 at-bat season, but there is one thing that really jumps out from Gardner’s stat line: a 6-for-7 mark against lefties. In 2011, he struggled against southpaws (.233 BA, 616 OPS), and that was a huge part of him being unable to build on his breakout 2010.

If Gardner is ever going to really explode, he’ll need to hit left-handed pitching, and the fact that he showed signs of life against them this year bodes very well for 2013.

He wound up batting a robost .323 with a whopping .417 OBP – both of which would have shattered career highs. Hell, if Gardner can hit .280 with a .385 OBP next year, that would be freaking huge. Toss in 50 RBI and 50 steals and you’ve got yourself one very desirable Fantasy outfielder.

Let’s not forget that last year he led the AL in steals with 49.

The arbitration-eligible Gardner wound up agreeing to a new deal for a $50,000 raise to $2.85 million. Not a bad deal considering he missed most of the season.

He can earn another $150,000 if he stays healthy enough to record 500 plate appearances next season.

What can we reasonably expect from Gardner in 2013?

The homegrown talent should play his usual solid D in centre field, get on base around 36 per cent of the time and steal 50 bases, assuming he can return to his usual durable ways (this year notwithstanding). He’s not going to supply power, but if he can hit over .275, he’s going to be a major Fantasy asset because of his speed and runs.

By RotoRob
This entry was posted on Sunday, December 23rd, 2012 at 2:16 pm and is filed under BASEBALL, Fantasy Notes, Player profile, RotoRob. You can follow any responses to this entry through the RSS 2.0 feed. Both comments and pings are currently closed.