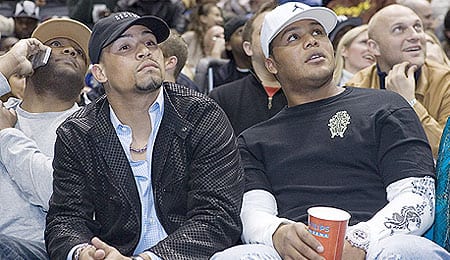 Andruw Jones (right) could soon have a lot more time to watch sports.

Before we get to today’s note, I want to thank Dear Mr. Fantasy for profiling RotoRob.com as their Fantasy Sports Website of the Week in their Podcast this week. Cheers, dudes!

When we last checked in on Robinson Cano in an early July Podcast, we talked about how he and Ian Kinsler were forcing baseball to snub Jason Kipnis from the All-Star festivities.

Well, the second baseman who has generally entrenched himself in the three-hole in the Yankee lineup of late, cooled off in July, was a tad better in August, but has struggled in September. The second half has not been kind to Cano.

On Tuesday, however, Cano looked like his old self, going 3-for-3 with a walk and a run. It wasn’t enough to help the Yankees win, but fortunately Toronto did the Pinstripers a favour by whipping the O’s.

Despite the sluggish second half, Cano is enjoying another huge season. He’s got a chance for a fourth straight 100-run season, but his hit total will probably dip for a third straight season unless Tuesday’s showing is the beginning of a crazy hot streak.

On the plus side, Cano has put together his first 30-homer campaign, although thanks to a substandard .239 mark with RISP, his RBI count is way down. He’s drawn more walks than ever before, and that’s combined with the power spike to make this a successful season.

The true measure of his season will be whether Cano can put together a third straight phenomenal postseason performance or if we’ll see the 2009 playoff version of him.

Tuesday night was a step in the right direction. Now let’s see if Cano can build on that.

By RotoRob
This entry was posted on Wednesday, September 26th, 2012 at 12:30 pm and is filed under BASEBALL, MLB Today, RotoRob. You can follow any responses to this entry through the RSS 2.0 feed. Both comments and pings are currently closed.