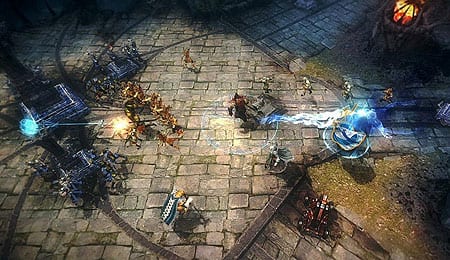 Battles get a lot crazier than this.

With Peter Jackson unleashing his first of three Hobbit films, An Unexpected Journey, the savvy folks over at Warner Brothers Interactive have decided it’s the perfect time to send gamers back to a time when elves, dwarves and wizards walked the lands with the release of Guardians of Middle-Earth. The game mixes familiar characters from J.R.R. Tolkien’s world with a real-time strategy spin usually reserved for PCs, making for, dare I say, an unexpected journey.

As Ensemble Studios proved with Halo Wars, real-time strategy can work on the console if the controls are streamlined adequately — something developer Monolith has done a respectable job of as well. Each character displays an area of effect (AOE) for your attacks so you need only point your Guardian in the proper direction and hold down the right trigger for him to engage your enemies.

Special abilities are mapped to the four face buttons, each of which can alter the AOE’s size and shape, making it possible to keep track of who you’re targeting. Potions can be used via the d-pad and a powerful command is executed with the left trigger (the left bumper is used to cycle through your commands). For non-combat functions, you can upgrade towers and troop nodes by holding down the bumpers and selecting from available options.

It all works pretty well with abilities and commands both featuring a cool down timer to prevent you from spamming attacks. Still, there’s a slowness that pervades every action you take, particularly when moving around the map as it just feels like you’re running in sand. Plus, when units start massing in a particular area it gets far more dicey to target foes. In fact, during those moments I often found myself just watching my hit points to know when to strategically retreat and heal up.

Outside of a slick-looking FMV introductory sequence, Guardians of Middle-Earth doesn’t flex much muscle graphically. There’s nothing really wrong with it — it’s just that it could’ve been placed into any number of other titles without the Lord of the Rings license and you’d think nothing of it. In fact, about the only area you’ll notice Tolkien’s (or Jackson’s) influence is with the Guardians themselves as they look like their film version’s likeness. As noted, the screen can become overly busy when choke points become heavily contested, which leads to some confusion.

There isn’t much happening on the audio front apart from the clang of metal and the roar of battle, which is only interrupted by sporadic updates from an announcer that brings you up to speed on who has been killed or what position has fallen. More musical accompaniment would’ve been nice, especially given the strong tunes found in the films, but instead we get a “less is more” approach.

Despite being a product of the lore-laden world of Middle-Earth, the latest downloadable venture for Warner Brothers Interactive has no story whatsoever. Instead, Guardians of Middle-Earth introduces console gamers to the MOBA, short for multiplayer online battle arena, where up to 10 gamers divide into teams of five to do battle. Your goal is simply to protect your own towers while destroying the enemy’s encampments.

To do this each player takes control of one of the Guardians, which are split into good and evil (though anyone is free to choose any character so you’ll see Legolas teaming with Golem and so on) with five different classes that balance offensive, defensive and support characteristics. NPC soldiers will spill into the battlefield as well, traveling down pre-determined paths and trying to lay siege to your foes. In reality, their main job is to serve as cannon fodder so that the towers target them instead of you while you destroy them.

As you kill enemies and topple towers you’ll gain experience points, which allow you to level up during the game — you start at Level 1 and can ascend all the way to Level 14. Each level gained allows you to improve the potency of your abilities while also unlocking pre-loaded buffs that you carry into battle on your belt. The slots on the belt are fitted with gems, which afford special properties such as increased damage or reduced time on your cool downs. NPC soldiers and tower defenses can be beefed up as well starting at Level 6 with the best buffs off limits until Level 12.

Beyond in-game leveling, the game also keeps track of an overall rank, which moves up based on XP earned from completed battles. As your rank increases you unlock additional slots for potions as well as commands. It’s a fine system, though it might seem annoying early on when you have no commands or potions at your disposal while higher ranked enemies have multiples — an issue a game like Call of Duty has gotten around by offering pre-canned loadouts with better gear available. Money earned is used to buy new gems, potions and additional Guardians.

Battles can be all over the map, with lopsided contests and nip-and-tuck affairs plentiful. There’s an unfortunate (yet completely necessary) strategy of retreating to the cover of your towers that creates a little too much chasing, but as with most games the better players will take advantage of situations created by this. There is definitely a learning curve in place as many of my early matches resulted in lots of death and few, if any, Guardian kills. The more I played, though, the better I got and the more I enjoyed my time with the game.

Where Guardians of Middle-Earth runs into some serious trouble is with the shaky Internet connections that seem to come up far too often. Not only that, but you can expect wait times to even get into a match to exceed five minutes at times… hell, anything less than two is surprising. There are also a mere two modes on offer: Battlegrounds (5 vs. 5) and Skirmish (5 vs. CPU). Unfortunately, the A.I. is so bad that Skirmish offers little enjoyment, leaving Battlegrounds to carry the game.

Technical issues undermine some of the fun you can have in Guardians of Middle-Earth, but it’s still a pretty good way to spend 20 minutes. If you enjoy real-time strategy and are looking for something new to play this should fit the bill.

By Herija Green
This entry was posted on Monday, December 24th, 2012 at 11:39 am and is filed under Herija Green, Video Game Reviews. You can follow any responses to this entry through the RSS 2.0 feed. Both comments and pings are currently closed.