Is Ichiro Suzuki Still a Must Own Player? 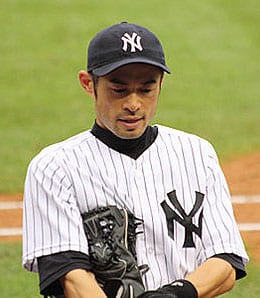 Ichiro Suzuki in pinstripes is a strange sight.

One of the more shocking moves leading up to the non-waiver trade deadline was the exodus of Ichiro Suzuki from Seattle to the Yankees.

Not only was it mind-blowing to see him agree to leave the only team he’s ever played for on this side of the Pacific, but it was simply unbelievable to see Ichiro batting eighth once he donned the Pinstripes. Eighth… really?!

But the fact is that Ichiro is not automatic anymore. A dude who would consistently get on base by smacking groundballs recently endured an 0-for-11 drought on groundballs in play.

Since landing in New York, he’s found himself sitting against the occasional lefty and after a pretty good start to August, Ichiro has managed just one multi-hit game over the past 10 games and is batting just .192 in the past week.

And while he’s actually wound up on the wire in some shallow leagues, it’s worth noting that not only was August his best month of the season so far (five doubles, one triple, two homers) from a power perspective, but he also hit .297. Unfortunately, he only stole one base.

There’s no doubt that Suzuki’s downward career trajectory had continued in Seattle, where he managed a mere 105 hits through the first 95 games, but his overall numbers have been better as a Yankee. No, he’s not getting as many hits per game, but he’s getting way less at-bats per game, so his average is actually much improved. He’s also getting on base more often, and from where we sit, this resurgence has helped salvage what was shaping up as the worst season of his career.

Ichiro remains among the most popular people in Japan, but his time in North America is running nigh, despite an uptick in extra-base pop this season.

Whether the deal has helped the Yanks or not remains a question. New York lead the AL East by six games when it acquired Suzuki; that lead is now down to a mere two games.

Of course we can’t pin that on Ichiro, but it’s food for thought.

It will be fascinating to see whether the Yankees move to re-sign the pending free agent this winter.

He remains a strong defender who is capable of playing all three outfield positions, but with Brett Gardner ready to return from elbow surgery in 2013, will the Yanks need Suzuki any longer? Then again, if pending free agent Nick Swisher leaves, the Yanks may want Ichiro to take over right field.

The 10-time MLB All-Star will be 39 next month, so it’s clear time is running short on his career. It will be interesting to see if he sticks around long enough to reach 3,000 hits as a major league – he’s just 432 shy as we speak. By the end of the season, he’ll probably be just 400 hits and change from the milestone, which would be a truly amazing feat when you consider he racked up almost 1,300 hits in nine seasons in Japan.

By RotoRob
This entry was posted on Saturday, September 1st, 2012 at 12:43 pm and is filed under BASEBALL, Player profile, RotoRob. You can follow any responses to this entry through the RSS 2.0 feed. Responses are currently closed, but you can trackback from your own site.