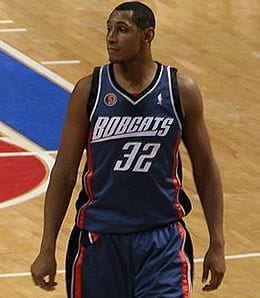 Boris Diaw continues to provide across the board Fantasy production.

Remember how D.J. Augustin started really taking off once Larry Brown was sent packing and Paul Silas took over in Charlotte?

But then, just as suddenly, the point guard looked tired and beat up, and he started struggling – a run that coincided with the resurgence of Shaun Livingston. Fantasy owners had legitimate reason to worry that Augustin’s job was in jeopardy.

Well, Augustin came out of the All-Star break with a serious statement game on Tuesday, canning 8-of-15 from the field (including two three-pointers) and 5-of-5 from the line for 23 points and eight assists in close to 36 minutes of action. It was great to see his shot falling, especially given his horrific shooting woes of late (14-of-49 in his previous half dozen games).

Augustin’s exploits helped Charlotte pile up 114 points to beat the defensively deficient Raptors and it was his first double-digit scoring effort in five games. He’s back, baby!

Augustin has established himself as a key building block in Charlotte, and clearly his recent slump was just a temporary glitch. Still, February’s been a tense month for those of you that own the PG, as his numbers have plummeted across the board. Hell, even his rebounding was down!

But overall, 2010-11 has been a major breakout party for Augustin in the wake of Raymond Felton leaving town. Yes, he’s had expected periods of adjustment to playing starter minutes, but Fantasy owners have to be pleased with how he’s done for the most part. After not playing nearly enough to be a Fantasy factor last season, Augustin is getting great burn this season, and his shooting touch has bounced back after last season’s disaster. He’s back to averaging 1.5 3-pointers a game as he did in his rookie season, and he’s not only getting to line more often than ever, but he’s shooting a career best 90.5 per cent from the charity stripe. Augustin is even enjoying his finest rebounding campaign.

Boris Diaw played heavy minutes Tuesday and responded with his usual across-the-board production, In almost 38 minutes, the veteran Frenchman was 6-of-10 from the field and 3-for-3 from the line for 16 points, with nine assists, four steals, three rebounds, one block and one 3-pointer. That’s a unique line for a forward, and is a good example of what Diaw can provide on a nightly basis.

Diaw has been struggling on the boards lately and his assists have also been down, so Tuesday’s dime-dropping display was a welcome sight for his owners.

Overall, Diaw is enjoying a fine season from long distance, shooting 34.5 per cent from beyond the arc and averaging one three pointer per game for just the second time in his career. Unfortunately, his FT attempts have dropped the past couple of seasons, and that’s hurting his scoring.

There’s a chance he’s unowned depending on how shallow your league is, and as long as Tyrus Thomas remains out, Diaw – as inconsistent as he is – is worth rostering. Note that Diaw was supposedly on the trade market, but things have gone quiet, so it looks like he’ll remain with the Bobcats, and that’s probably a good thing for his Fantasy value.

Nazr Mohammed is someone we recommended back in early December, but that hasn’t really panned out unless you’re in a pretty damn deep league. The thing is, every now and then, he makes some noise and flashes his ability and then – usually – goes right back into the tank. However, starting centre Kwame Brown has really disappeared lately, so the opportunity is there, and that’s why I was paying a bit more attention to the fact that Mohammed had 14 rebounds with eight points in nearly 24 minutes of action on Tuesday. Yes, it’s his highest rebounding total since mid-November and the first time he’s pulled down double digits since early December, but this situation bears watching as Brown continues to underwhelm.

Mohammed could be on the trading block and if he moves to a situation where he’ll regularly get 20-to-25 minutes, he’s again going to be worthy of some Fantasy consideration.

Speaking of Brown, someone we recommended for pickup last month, he’s had a block in three of the past four games, but that’s a bit of an aberration for a dude that only averages 0.6 BPG. Of greater concern to his owners is the fact that he’s failed to garner double-digits in boards in over two weeks and hasn’t scored in double digits since February 5. Feel free to dump him; in fact, I did that very thing Wednesday, picking up Sonny Weems instead. Brown had a real nice run in January, but I guess he’s finally remembered that he’s Kwame Brown.

The news wasn’t all good for the Cats Tuesday. Leading scorer Stephen Jackson suffered a left hamstring injury and left early. Fortunately, he later said that he would have played through it had it been a closer game, but the fact that he skipped practice Wednesday has to be at least a bit worrisome for his owners. S-Jax is expected to play Friday, but I’d keep my eye on the news to see if his condition worsens.

Before he left, Captain Jack was having another of his all-around production games, having sunk 5-of-11 from the field and 2-of-2 from the line for 13 points, five assists, two rebounds, two steals, a block and a trey in 26 minutes. Jackson’s touches are down this month – especially from long distance – but he’s shooting much better and getting to the line more, so is actually enjoying his best scoring month of the season. Unfortunately, his work on the glass has slipped, as the 3.5 boards per game he’s averaging in February represents his worst month of the season. I guess that’s a tradeoff his owners are willing to take.

By RotoRob
This entry was posted on Wednesday, February 23rd, 2011 at 3:13 pm and is filed under BASKETBALL, NBA Today, RotoRob. You can follow any responses to this entry through the RSS 2.0 feed. You can leave a response, or trackback from your own site.