The Wire Troll: Jordan Williams Back in the Net Rotation 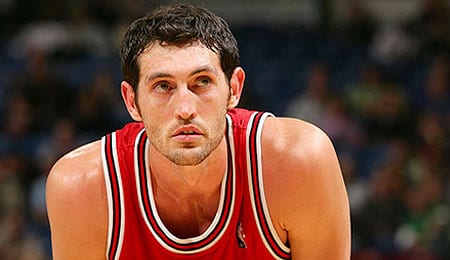 Kirk Hinrich is getting a chance to start in Atlanta’s three-guard lineup.

Next week marks the final week of the regular season in many Fantasy leagues, so here’s hoping your team is still very much in the thick of the playoff race and – even better – that we helped put you there.

Kevin Love suffered a thumb injury, but the tough dude played through it, putting up a another monster double-double Friday. Meanwhile, Baron Davis – shockingly – is not as resilient, and he’s been sidelined yet again and won’t be in action Saturday after suffering a hamstring woe Friday. Meanwhile, you Nene owners have to deal with your dude getting dealt to the lowly Wizards this week, and he’s not expected to be ready to join them until Wednesday at the earliest. Manu Ginobili, who looked like he was starting to get his act together on Wednesday, wound up taking a DNP-CD Friday for “precautionary reasons.” He’ll be back in the Spurs’ lineup Saturday. On the good news front, Zach Randolph is finally back, and with his return, Marreese Speights’ Fantasy value disappears.

Okay, without further ado, here are our picks of the week. As always, players on the list currently appear in 50 per cent or less of all ESPN and Yahoo! leagues.

Kirk Hinrich, PG/SG, Atlanta Hawks: With both Willie Green and Marvin Williams out, the Hawks have been going with a three-guard lineup, meaning Hinrich has been starting for the past week. The results have been mixed so far, but with Captain Kirk playing at least 41 minutes in three of the past four games, he’s worth a look – especially with news that he could stick in the starting five even after Williams returns.

Isaiah Thomas, PG, Sacramento Kings: The Kings’ recent struggles have eliminated any chance of a playoff run, so why do they keep running John Salmons out there to eat into Thomas’ minutes? Yes, Tyreke Evans’ ankle injury helped things along the past game and a half, but Thomas has been rolling lately and again deserves attention in all formats. He’s shown a real sweet touch from the field of late, and you’ve got to love that he’s canned at least one trey in six straight games after slumping in this department earlier this month. Three straight games of at least 13 points plus that 10-dime performance Friday night has our attention. Thomas’ second double double of the season announced to the world once again that he is a serious up and coming talent at the point guard position.

Daniel Gibson, PG/SG, Cleveland Cavaliers: Gibson is tough to own because of the inconsistent nature of bench players. For instance, he took a goose egg Tuesday and then came back the next night with five treys as part of an 18-point game. But if you need 3-pointers, he’s a great option.

Nate Robinson, PG/SG, Golden State Warriors: Now that Monta Ellis has been moved to Milwaukee, Robinson needs to be scooped up in all formats – and quickly.

Jordan Williams, PF/C, New Jersey Nets: It’s time to put the Nets’ rookie big man on the radar in very deep leagues as he’s popped back into the rotation this week. Williams played 12 minutes Wednesday, but saw 21 minutes of action Friday, responding with 10 points, six boards and two steals. New Jersey’s frontcourt is fairly shallow these days and it’s clear the team is going nowhere fast, so it would behoove the Nets to see what they have on their hands in the 36th overall pick from 2011.

Courtney Lee, SG/SF, Houston Rockets: We recommended Lee back in late January and his PT has risen steadily since then, yet he remains widely available. He dislocated his finger Wednesday, but plans to play through the injury, and considering the minutes he’s received lately (37 MPG in the past two), he’s worth a look. On Tuesday, Lee got hot from the floor, draining 8-of-12 including 4-for-7 from beyond the arc for 21 points with four boards, three steals and a rare block. The following night, he cooled off, but still canned another pair of long bombs.

Alonzo Gee, SG/SF, Cleveland Cavaliers: Gee has started the last seven games for the Cavs, putting up solid numbers in points, boards, treys and – especially – steals. How 3.4 swipes per game over the past five?

Gordon Hayward, SG/SF, Utah Jazz: Even though he’s back to a bench role, Hayward has been scoring and pitching in with treys. On Thursday, he went off for 26 points in 38 minutes while canning a pair of threes.

Spencer Hawes, Philadelphia 76ers: Hawes returned Wednesday from a 17-game absence, and although his minutes will be limited for now (and he sat Friday altogether), you should grab him now while you can. He averaged a double-double in December, so is worth a look because of his upside. Yes, Hawes is brittle, but he’s a difference maker when he’s right and given Nikola Vucevic’s struggles of late, Hawes should begin ramping up his PT real soon.

Greg Stiemsma, Boston Celtics: If you’re in a deep league and needs some blocks, look no further than Celtic rookie Stiemsma. Boston’s frontcourt is decimated, having lost Chris Wilcox for the season and Jermaine O’Neal is possibly done as well. Stiemsma isn’t seeing major minutes, but he doesn’t need heavy PT to put up elite block numbers. The 7-footer is giving the Celtics a great defensive presence off the bench, averaging 2.2 blocks in just over 19 minutes per game over the last five.

Robin Lopez, Phoenix Suns: Lopez has really slipped the past couple of seasons, but he’s starting to make some noise lately with three double-digit scoring efforts in the past five and an average of 1.6 blocks. The PT is creeping up, and if Lopez can start regularly seeing 20-to-25 minutes of burn, he’ll be worth a look in deeper formats.

Derrick Favors, PF/C, Utah Jazz: Favors is starting to get enough minutes to be put back on your radar again, and he came through with 14 points and a block Wednesday and then a season-best 16 boards with four blocks the following night.

By RotoRob
This entry was posted on Saturday, March 17th, 2012 at 1:24 pm and is filed under BASKETBALL, RotoRob, The Wire Troll. You can follow any responses to this entry through the RSS 2.0 feed. Both comments and pings are currently closed.