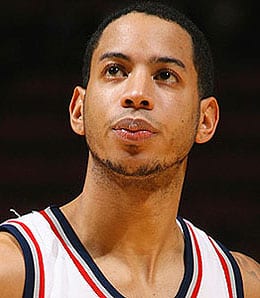 Devin Harris has looked lost at times this season, but is playing well now.

Welcome to the NBA All-Star weekend, the unofficial end of the first half of the season. If you’re in the running for your league title, congrats. We hope we’ve helped. If you’re on the bubble, it’s time to crack down and make up some ground in the second half, so use the wire as judiciously as you can.

It was another eventful, albeit short week in the NBA, as Kyrie Irving looked like a man among boys in the Rising Stars game, Andrew Bogut has dodged surgery (leaving a slight possibility he’ll be back before season’s end) and Isiash Thomas has been going hog wild as the new starting PG in Sacramento.

Now on to this week’s Fantasy basketball waiver wire recommendations. As always, all picks are owned in 50 per cent of both ESPN and Yahoo! leagues.

Devin Harris, PG, Utah Jazz: As we identified in the season debut of The Wire Troll, Harris was in real trouble this season, and he has more or less fallen into a timeshare with Earl Watson. However, Harris is showing signs of life lately, playing at least 26 minutes in each of the past three games and reaching double digits in points in three of the past four. On Wednesday, he dropped eight dimes and pitched in with a couple of steals. If you need help at PG, give Harris a look. He’ll give you headaches from time to time, but is generally doing enough to be owned in all formats.

Luke Ridnour, PG/SG, Minnesota Timberwolves: We gave Ridnour a nod a few weeks back, and his recent play dictates another look from Fantasy owners. Yes, J.J. Barea’s presence is worrisome, but Ridnour is getting the burn – 35 minutes on Wednesday, when he knocked down a buzzer beater as part of a 17-point, six-assist, three-rebound, one-trey effort to help the T-Wolves to another win. With Ricky Rubio now the point in Minny, Ridnour is the off guard, and that’s going to affect his assist numbers, yet he’s still had at least five dimes in four of the past five games. There is danger that if the Wolves hang around in the playoff race – and they continue to hold their own lately – the team will opt to make a move for a more traditional starting two-guard, but for now, Ridnour is a decent low-end play.

Baron Davis, New York Knicks: Davis finally made his season debut this week, and while he’s been Pipped by Jeremy Lin and has struggled with his shooting touch so far, he’s worth putting on the radar as his minutes start to creep up.

Norris Cole, PG, Miami Heat: The rookie has been inconsistent, but is starting to get more PT lately, has hit double digits in four of the past five and could threaten starter Mario Chalmers if he keeps draining his shot like he has been lately (52.4 per cent over the past five).

Corey Brewer, SG/SF, Denver Nuggets: Brewer has been one the hottest pickups this week, and with good reason. He’s been starting for the Nuggets and getting it done, averaging 16.6 points, 3.8 boards, 1.2 steals and 1.4 treys over the past five, twice scoring at least 23 points over that stretch, including an explosion of five three-pointers on February 17. While Denver deals with a range of injuries, Brewer must be owned. Ironically, it was just over a year ago that he moved into the starting lineup for Minnesota and turned into a Fantasy asset and now history is repeating itself for Brewer.

Steve Novak, SF/PF, New York Knicks: It’s been over three years since Novak last popped up on the Fantasy radar, but he’s been filling it up from downtown, making him an excellent choice for those who need help in treys. He’s been getting a bit more PT lately (over 20 MPG in the past five), and has responded with a barrage of long bombs including 15 over the past four games and nine in the last two. Smoking! In New York, it’s all Jeremy Lin all the time these days, but Novak has been showing a little something something of late, making him worth a pluck if you need three-balls.

Kenneth Faried, PF, Denver Nuggets: Those injuries for Denver we alluded to earlier have also given Faried a chance for some burn, and the rook has responded with some nice numbers on the boards, averaging 9.3 over the past three.

Taj Gibson, PF, Chicago Bulls: Gibson doesn’t get enough PT to warrant consideration in standard formats, but his per minute production (he just missed double-doubles in two of the past three games despite playing just 19 minutes in each) makes him a nice add in deep formats. And if he gets dealt (there are rumours) and lands in the right situation, Gibson could blow up (in a good way).

DeJuan Blair, PF/C, San Antonio Spurs: Injuries to Tiago Splitter and Kawhi Leonard have opened up frontcourt PT for Blair, and he’s responded. He got a season-high 35 minutes of burn Thursday and went off for a season-high 28 points (on an efficient 12-for-21 from the field, 4-for-4 from the line) with 12 rebounds (another season high), three assists, two steals and a block. He’s now hit double figures in scoring in four straight games to earn his first waiver wire nod from us in over a year. Just 22, there is upside yet in Blair’s game and as the Spurs rest their vets down the stretch (as they always tend to), he’ll be in line for more PT, so grab him now and enjoy what should be a very fine second half.

Larry Sanders, PF/C, Milwaukee Bucks: This is a deeper league special only, but Sanders has gotten more burn lately, averaging 25 MPG in the past two contests heading into the break. With Scott Skiles in charge, you never know who is going to get the PT in Buck Land, but Sanders put up his first double-double of the season on Monday, adding three blocks and two steals, and then blocked another couple of shots on Wednesday. We expected him to be a big shot blocker coming out of college, but he didn’t get enough burn last year to make much of an impact as a rookie. He’s been seeing even less time this season – even with Andrew Bogut likely done for the season – but if he keeps getting 20 or more minutes, Sanders can provide a boost to your block numbers in very deep formats.

Gustavo Ayon, PF/C, New Orleans Hornets: Ayon has been starting for the Hornets and crashing the boards – how about cleaning up the glass to the tune of 17 boards on Wednesday? It was just the third time in the last 50 years and undrafted rookie had that many in a game.

Kendrick Perkins, Oklahoma City Thunder: Don’t expect any offense, but Perkins can sure play D, and has averaged almost 10.7 boards and 2.7 blocks over the past three games.

By RotoRob
This entry was posted on Saturday, February 25th, 2012 at 8:16 pm and is filed under BASKETBALL, RotoRob, The Wire Troll. You can follow any responses to this entry through the RSS 2.0 feed. Both comments and pings are currently closed.