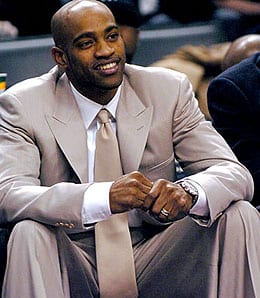 Vince Carter has spent a lot of time in street clothes lately, but he’s back now.

And we’re back! It’s Saturday, so that means another serving of freshly cooked Fantasy basketball waiver wire recommendations in the NBA version of the Wire Troll.

This week, Milwaukee Bucks centre Andrew Bogut suffered a – shock of shocks – serious injury that could sideline him three months, effectively ending his season. Drew Gooden gets a great boost with this news, but you can also move Ersan Ilyasova up a few notches. Over in Big D, Vince Carter has returned for the Mavericks, but how much does he have left to offer Fantasy owners? Of course, one of the biggest stories of the week was the return of Dwyane Wade, who piled up the points in his first game back from his ankle injury Friday, helping the Heat take out the struggling Knicks.

As always, we’re concentrating on waiver wire options that are available in at least 50 per cent of Yahoo! and ESPN Fantasy leagues. Enough babble. Let’s get to our picks…

Vince Carter, SG/SF, Dallas Mavericks: Carter was bad enough last season to garner consideration as the RotoRob 2011 Fantasy Basketball Dud of the Year. And despite occasional flashes of his old self, Vinsanity’s early season play caused most owners (myself included) to jettison him to the waiver pool. A sprained foot injury that sidelined him for the past five games didn’t help matters, but VC returned Friday and was healthy enough to tie his season high with 28 minutes, canning 5-of-10 from the field (including a trey) for 12 points with four boards and three assists. The backcourt in Big D is a hot mess, but Carter should be considered in deeper formats and put on the watch list in standard leagues.

Marco Belinelli, SG, New Orleans Hornets: Belinelli has long teased Fantasy owners with his periodic explosions, but just as often has frustrated us with his penchant for disappearing. However, he’s got the starting two-guard job for the Hornets with Eric Gordon out, and with news this week that Gordon will be sidelined another 3-to-6 weeks, Belinelli’s shelf life has been extended, making him worth a look in most formats – especially if you need 3-pointers. The Italian sharpshooter canned four treys as part of a nice game Friday in which he tallied 15 points, but – as we alluded to – he is prone to stinkers (the previous game he went 2-for-8 with just four points in 33 minutes). Add a sprinkling of steals and very little else and you’ve got Belinelli – not hugely helpful, but very useful in certain circumstances.

Toney Douglas, PG/SG, New York Knicks: Douglas, back in the starting lineup for a couple of games with Carmelo Anthony nursing some minor health issues, canned four trifectas as part of a 16-point explosion on Friday. He’ll get a chance to do more damage Saturday.

Goran Dragic, PG/SG, Houston Rockets: Kyle Lowry’s backup is seeing pretty good minutes off the pine (over 24 MPG in the last four) and is showing a nice well-rounded game (how about Friday’s effort of nine points, seven assists, six boards, one three-pointer, one steal and one block?).

Jason Smith, PF/C, New Orleans Hornets: The struggling Hornets have already realized that life without Chris Paul (not to mention the injured Eric Gordon – the key component they got in the Paul trade) ain’t easy, so the rebuilding process is underway. Veteran Chris Kaman (also acquired in the CP3 deal) has seen his minutes dwindle and now the team is trying to deal him, leaving the PF job for younger Smith, who flashed Fantasy value just about a year ago when Emeka Okafor got hurt. On Friday, Smith played 29 minutes and showed a deft touch from the field, canning 7-of-9 for 14 points to help the Hornets win for just the fourth time in 15 games this season. He’s not going to get a lot of boards, but has nice shot blocking potential, averaging 1.2 in just 19 minutes of action per game.

Al-Farouq Aminu, SF, New Orleans Hornets: Aminu has also benefited from the Hornets’ decision to part ways with Kaman. We expected Aminu to be a top 35 small forward this season when the second-year forward was moved to Nawlins in the Paul trade. Unfortunately, his PT had been too inconsistent for him to do much, but he’s getting his chance now. After seeing 25 minutes of action on Wednesday, Aminu earned 28 minutes Friday – the most of any Hornet reserve – and he came through with nine points, five boards and a steal. In the past two games, he’s shot it extremely well (9-for-14) and averaged two steals per game. Kaman is not part of the Hornets’ future; Aminu is. It’s time to consider him in deeper formats, because Aminu’s going to get a real opportunity to show what he can do and he’s definitely capable of more offense than what we’ve seen so far this season.

Shawne Williams, SF/PF, New Jersey Nets: Given his limited burn, this is just for very deep leaguers, but now that Williams is healthy again he’s canned five treys in his first four games back, making him a category specific target in large formats.

Anthony Parker, SG/SF, Cleveland Cavaliers: Parker is strictly a deep league special, but his shooting touch has looked good the past two games (8-for-16) leading him to 10.5 PPG. He’ll pitch in from downtown and drop a couple of dimes as well, while his stellar D ensures a starting gig and the PT that comes with it.

Tiago Splitter, PF/C, San Antonio Spurs: Heading into last season, we had Splitter on our list of rookies to watch, but he hadn’t really done anything worth keeping an eye on until recently. However, he’s suddenly rhymed off six straight double-digit scoring games off the Spurs’ bench while showing a deft shooting touch (10-for-13 in the past two games alone). Unlike a lot of big men, Splitter is a solid FT shooter and despite his limited burn – he’s played between 18 and 32 minutes over his six-game run – he’s been pulling down decent board numbers and chipping in with the occasional block. He’s playing very well lately, but beware that Coach Gregg Popovich is maddening when it comes to trusting newer players enough to run the offense through them. If Pops ever sets Splitter free, he’s going to pile up some serious points, but even off the bench, right now he looks like a solid addition in all formats.

Nick Collison, PF/C, Oklahoma City Thunder: Collison has been a key bench player for the Thunder/Supersonics forever, but most of the time all he does is frustrate Serge Ibaka owners by taking away minutes from Sir Chewblocka. Well, if you’re in a deeper format (say, 16 teams or larger), Collison supplies enough low level production to be useful. He’ll give you a bit of scoring, some boards, a sweet FG percentage and – in the last three games, anyways – he’s been throwing a block party with four swats. Collison’s never been a big-time shot blocker, but if the minutes are there (he got 25 on Friday), he’s shown he can pull down nice rebound totals.

Glen Davis, PF/C, Orlando Magic: Davis is currently only an option in leagues of 14 teams or more because of his inconsistent PT, but he’ll provide boards and points and his FG percentage has to come around. Doesn’t it?

Matt Bonner, PF/C, San Antonio Spurs: The Red Rocket gets a nice boost when Tim Duncan has to sit the occasional game to stay fresh, but even so, Bonner still cans the long bombs with eight in the past two games alone.

By RotoRob
This entry was posted on Saturday, January 28th, 2012 at 2:59 pm and is filed under BASKETBALL, RotoRob, The Wire Troll. You can follow any responses to this entry through the RSS 2.0 feed. You can skip to the end and leave a response. Pinging is currently not allowed.