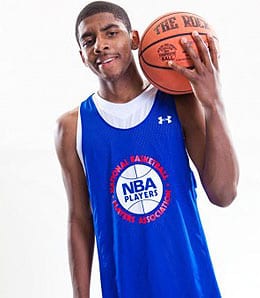 Kyrie Irving is at the head of an uninspiring draft class.

With the 2011 NBA Draft on Thursday, some draftniks think they have it all figured out. Not a chance, my friends! It’s so unpredictable because the Association has become such a potential-driven organization, to the point where GMs defy logic to take a project instead of a proven commodity. The decision makers are regressing to infancy, drawn in by shiny objects and 43-inch verticals. Gone are the days of taking the four-year college standout who has a reliable jump shot and the maturity that can allow him to make an instant impact in some capacity. Hell, these days if you stay four years it actually hurts your stock because that just gives more time for the critics to find nit picky flaws. Regardless, it’s the NBA draft is still always a great event and fans are dialed in, especially as they grab their last bit of NBA coverage before the summer.

This draft, unlike many over the last decade, lacks star power at the top -– with Kyrie Irving and Derrick Williams leading the uninspiring group. Seriously, a freshman who missed most of the season and a guy who caught lightning in a bottle for a month are the standouts? The 2011 class does have depth and includes many ballers who could become solid contributors, but no team will be sculpting their franchise with a single, off-putting David Stern announcement.

The top five picks could get very interesting as the Cavs hold Nos. 1 and 4 and the Timberwolves are slotted at No. 2. Has there been a pick that Minnesota GM David Kahn has not severely botched? This could be fun. With Kevin Love, Anthony Randolph, Wesley Johnson, and Michael Beasley (not to mention Ricky Rubio is finally crossing the ocean to join the T-Wolves) on the roster, would there even be room for Williams in Minny? Does Kahn even care? Remember he is the one who drafted Jonny Flynn, Ty Lawson and Rubio in a single draft (Okay, yeah he did trade Lawson… but still). The Jazz is sitting at No. 3, where it is desperately trying to find a white guy it can justify drafting that high and the Raptors, who own the No. 5 spot, are filling their draft board with unknown international talent. The whole draft is a crap shoot, but especially after the first handful of picks.

Classifying the NBA draft prospects is no easy task; even those who spend hours in the gym evaluating every aspect of a kid only get it right a fraction of the time. As Fantasy basketball junkies, we want to sift through the fresh talent and decide who are the guys that can produce at the NBA level, who can develop into a stat sheet king, and who will never live up to their labeled potential. Yeah, it does take time for things to shake out, but you can still be smart about it.

A big determination of value depends on the team that drafts the player and what shape the roster is in. In Fantasy basketball, more minutes translates into increased stats (other than shooting percentages and turnovers) and in general a greater value. We evaluate incoming rookies based largely on popular opinion and what we thought when we saw them last play in March. A good approach is to evaluate specific skills of a player and try to determine if those skills could translate into a role that would produce at the next level.

Let’s try to buck the trend of buying into the potential hype, and instead think about the next level and find value for our Fantasy squads. Of course, we should not draw our final conclusions until after the draft and free agency… but let’s dig in on some of this year’s top prospects. The consensus top two of Irving and Williams will undoubtedly be drafted way too early this year in Fantasy drafts, so staying away is advised.

Kyrie Irving, PG, Duke Blue Devils: The probable No. 1 pick will also probably be the first rookie taken in your Fantasy draft. Do yourself a favour and let your buddy draft Irving, this way you get to hear him complain about the kid’s lack of production and how Baron Davis keeps cutting into his minutes.

Derrick Williams, SF/PF, Arizona Wildcats: How many successful 6’8” power forwards are there in the NBA? How many 6’8” small forwards with questionable foot speed have success? Food for thought. Williams is definitely an athletic player who dominated at times in college, but most of the NBA can match his physical play and he may have trouble defending small forwards around the league. I don’t see his game translating into a future NBA All-Star. I think he will have a rookie season comparable to Evan Turner, which was by all accounts a little bit of a letdown.

Brandon Knight, PG, Kentucky Wildcats: It all depends on who drafts him, but I see Knight being a comparable NBA player to Irving, at a much lower cost. Knight seems to be more of a floor general than Irving, focused on running an offense, not just scoring. Knight is a cerebral player, which sets him apart from former John Calipari point guards Derrick Rose and John Wall. Knight could go as high as third to the Jazz and as low as seventh to the Kings.

Enes Kanter, C, Turkey/Kentucky Wildcats: Although there is risk with a guy who has sat out a year from competitive basketball, the overall game of Kanter is the most appealing of any prospect this year. He has the size and height to consistently rebound and he is very skilled for a big man. I would love to grab Kanter in a dynasty league as I believe he will be the first and only All-Star in this class three years from now. Kanter could go as high as No. 1 overall and I don’t believe he’ll get past the Wizards who pick sixth.

Jan Vesely, SF/PF, Czech Republic: This kid is easy to root for with his style of play, but I see him as an energy guy off the bench until he develops further. Vesely should be drafted anywhere from fifth to 15th, but he is not an instant impact player. You could see contributions from him once he gets settled into his role, but that will be defined by the patience of his coach because he will make two or three mistakes for every highlight.

Jonas Valanciunas, C, Lithuania: This Lithuanian is more of a project than NBA-ready contributor. He has nice size and athleticism, but needs to work on this body and his low post game. Valanciunas is a stash play for deeper dynasty leagues, but I would not count on anything for 2011-12. He should get drafted somewhere in the second half of the top 10, but I would not count on him for much until at least 2012-13.

Kemba Walker, PG, Connecticut Huskies: We know Kemba and are comfortable with his game, but everyone knows the NBA draft always is based on potential. All signs suggest that he is a leader and a winner, but the NBA is a different game and many see Walker as a fully developed player with a low ceiling. He could stand to work on his defense and his floor vision seems to be somewhat limited, but he is a flat out momma-there-goes-that-man scorer. He was asked to do so much at UConn that maybe we should give him a chance to run an NBA team before passing judgment. I see Walker slipping into the seven-to-15 range, but I would not put it past the Raptors to stretch out and take him at five. If he’s given the reins to the Raptor offense, he could be ready to contribute right away and could be a mid-round Fantasy play.

Jimmer Fredette, PG, Brigham Young Cougars: If you are in a category league, I really think you should consider drafting The Jimmer towards the end of the draft. Because of the hype, somebody will reach for him, but I think he is a much better athlete than we give him credit for and will be able to knock down shots. Defenses are not going to focus on Fredette like in college, so he should get good looks if he lands in the right offense. I see Fredette mocked to the Suns or Jazz outside the top 10, but I don’t think he gets passed the Kings at No. 7. What better a way to build hype around keeping the team in Sactown?

Tristan Thompson, PF, Texas Longhorns: I just don’t see an undersized power forward coming off an inconsistent freshman season having an impact in the NBA in the near future. I would not get sucked into the hype that NBA general managers seem to feed off. Thompson will get drafted higher than he should, but he is not a household name, so he may get ignored in your Fantasy drafts anyways. I’ve seen this name tossed around as a top 10 pick, but colour me not impressed.

Kawhi Leonard, SF, San Diego State Aztecs: Leonard had a very good season at San Diego St., but nothing he does stands out. He is a perfect candidate to slip come draft day because he is not a mesmerizing talent, but he is a fairly safe pick. I think Leonard could have a solid NBA career as a role player if he improves his perimeter game and develops discipline on the defensive end of the floor. I could see him going to Charlotte at No. 9 to replace Gerald Wallace or possibly the Pistons at No. 8 to be the next Tayshaun Prince.

Those are just a few of the names to focus on. After the draft, things will start to look clearer… but not much.

By Alex Hardin
This entry was posted on Saturday, June 18th, 2011 at 12:54 pm and is filed under Alex Hardin, BASKETBALL, Prospects. You can follow any responses to this entry through the RSS 2.0 feed. You can skip to the end and leave a response. Pinging is currently not allowed.