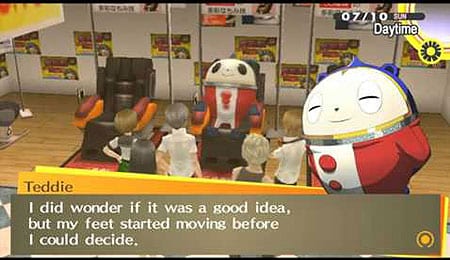 This is Teddie. He is amazing. That is all.

For years I was surprised by how much praise Atlus’ Persona 4 had gotten. I had played my fill of the third one, which I disliked enough to sour me on the series for good. Despite this, I got pulled into the hype and decided to try Persona 4 Golden for the PlayStation Vita. After doing so, I only have one thing to say: buy this game. You won’t be disappointed. If you’re the kind of person who enjoys Bioware’s games, you’re on the top of that list. This is as good as JRPGs get.

This is a PS2 game ported onto Vita, so it’s only natural that the graphics would end up falling short. Thankfully, these talking heads do look very crisp and clean with a decent amount of emotions. Considering the original technology and budget, this is not a bad port by any means. Just don’t expect anything cutting edge from this game.

I have a hard time describing the music. Half is the typical style of video game tunes done very well. These either do a great job of setting the tone of a scene or making battles and dungeon crawling more engaging. The other half consists of the weirdest pop music I have ever heard. Granted, I don’t listen to Japanese pop, but between how much it alternates between English and Japanese lyrics, it is very bizarre. And the strangest thing is, for some reason, it works. It could be because of how bizarre the game itself can get, but it just works.

Voice acting is fantastic. Goofy characters are voiced perfectly. There was even a character that at first made me think there was no way I would be able to endure her voice for a whole game and yet, a few hours later, it grew on me where I would never dream of muting her dialogue. The witty writing and perfect delivery of their lines worked together to make this one of the funniest games I’ve ever played.

First off, I want to say that this score is a little one sided as the combat is definitely the weaker part of the game. That’s not to say it’s bad, in fact it’s quite good, but I felt disappointed every time I reached the dungeon portions of the game. In any other game they would be one of the highlights. Plus, there is a great variety to the dungeons ranging from a castle to a strip club (seriously) that keeps them from getting tedious.

Combat is based around exposing weaknesses to elements such as ice and electricity in enemies while preventing them from taking advantage of yours. Weaknesses and resistances are dependent on magical beings called “Personas,” which allow characters to perform magic and other supernatural abilities. Party members are all tied to a specific persona while your main character can obtain them as a spoil of battle, and then alternate between them and fuse them together to make a better equipped Persona. Fusing was unquestionably the highlight of the combat as it compelled me to try to get the best possible Persona, which is crucial on the harder difficulties.

There are a couple of things holding combat back, however. The frequency at which normal attacks miss is absurd, with one battle having my main character miss five times in a row. This is caused by each weapon having its own accuracy rating. That would normally be fine, but weapons are very hard to come by, which caused me to frequently pick between the “too weak to be useful” and “too unreliable to be useful.” In another game this would be inexcusable, but thankfully magic was important enough that I was able to use it against regular enemies rather than save it for boss fights. Another issue is that the enemies love to spam one-hit kill spells, which are as annoying here as they are everywhere else. Persona abilities later on can severely mitigate this, so it is not as game breaking as it could have been.

Now for the… you know, I cannot think of a superlative strong enough to describe the Social Links. Suffice to say they are the reason that I’ve been unable to put my Vita down. They are very similar to conversations with crew members in Mass Effect, though more fleshed out. Spending the time getting to know a character will form a Social Link with them, which is tied to a particular type of Persona. Leveling up the bond will make you more capable with Personas of that type and cause fusions to gain automatic levels.

What really makes this so addicting is just how damn great the writing is for the characters. They feel like real people, yet they all have their own inner demons (sometimes literally) that they have to deal with in order to accept who they are. Amazingly, with just a couple exceptions (which are still very good), they are simple problems such as a girl who feels her only positive quality is her looks or a guy who strives to be tough yet enjoys activities frowned upon by society for not being masculine. They all can eventually come to terms with these issues with your help, all done with fantastic writing.

These characters made me constantly want to just play for one more day, which would soon turn into a week. These social bonds are also broken up with the main plot, a murder mystery. This mystery is very interesting and well done with very shocking twists and some surprising similarities to Heavy Rain. In fact, if you were to ask what Heavy Rain would be like if it were done by Atlus, the answer would be Persona 4.

While Persona 4 Golden isn’t quite perfect, the social link aspect of the game is so addicting and enjoyable that I cannot in good conscience give this game anything lower than the highest score. Persona 4 Golden is proof that a game does not need to be perfect to be one of the best ever made.

By Casey Curran
This entry was posted on Sunday, December 9th, 2012 at 10:20 am and is filed under Casey Curran, Video Game Reviews. You can follow any responses to this entry through the RSS 2.0 feed. Both comments and pings are currently closed.