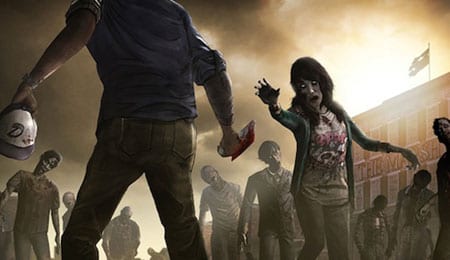 Lee’s quest to rescue Clementine shows one of the best emotional bonds in gaming history.

Note: The Walking Dead series looks, sounds, and plays the same from episode to episode. For an examination of those series characteristics, please see our Episode 1: A New Day review. This review will only provide an overall score for Episode 5: No Time Left.

I really don’t want to spoil anything. And as The Walking Dead series has let us explore how we build relationships with people (along with choosing who lives and who dies), you could have a different bond between characters than my playthrough. So the short review is that No Time Left is fantastic, but let’s talk a little bit about just why it works.

The Walking Dead, Episode 4 left us with a dual cliffhanger — Clementine was abducted and protagonist Lee was bit by a zombie. Episode 5: No Time Left picks up immediately after Episode 4’s close, and you’ll immediately be faced with the difficult choice of handling Lee’s condition. Within a few moments of starting up, it’s clear that the stakes are raised, and they don’t let up for the duration of the episode (2-to-3 hours) — as much as you really, really want our group of survivors to just experience a teeny, tiny bit of happiness.

I’m a veteran of story-driven games. Having grown up in the heyday of PC adventure games like Space Quest and Loom, I relished the day that console game stories took the leap forward from being the basic A-to-Z throughline that tied together level design to something tangible, something that enhanced the experience and created a fictional world that we got to partake in.

That being said, I think of the emotional moments of games that really stuck with me — Snake having to execute The Boss in Metal Gear Solid 3l discovering the truth about Tidus’ existence in Final Fantasy X; watching Ezio finally discover Altaire’s remains in Assassin’s Creed: Revelations. These moments show me that interactivity can enhance your bond with a character in a game rather than being mere window dressing for gameplay. It’s fair to say that No Time Left has moments that are near or at the top of my personal list.

Tell Tale Games has already announced a second season of The Walking Dead, and the way the game leaves things somewhat open-ended for things to continue. That doesn’t mean there isn’t a sense of finality with No Time Left, and I have to believe that for all of The Walking Dead’s technical flaws (there’s a setpiece near the climax of No Time Left that works fine but with better controls, it could have been fantastic), it’s a superior artistic achievement in how the player’s choices can craft how a relationship between two people can play out from the moment they meet. The bond between Lee and Clementine, and the difficult choices facing everyone as they struggle to survive the dangers of the living and the dead, is something that is a highlight in my gaming history.

So while Tell Tale didn’t fix the technical gaffes in the series, and there’s certainly some logic-skirting with what injured characters can physically accomplish, No Time Left is equal parts rollercoaster and gut-punch. Just like the rest of the series, it won’t satisfy gamers who don’t like its adventure game pace, but for anyone that’s invested in Lee and Clementine, you’ll be extremely satisfied. To say anything more specific would be a disservice.

By Mike Chen
This entry was posted on Sunday, December 2nd, 2012 at 11:56 am and is filed under Mike Chen, Video Game Reviews. You can follow any responses to this entry through the RSS 2.0 feed. Both comments and pings are currently closed.