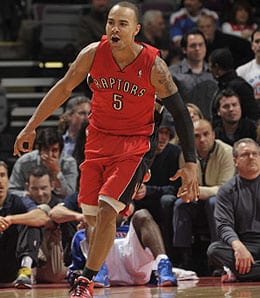 Jerryd Bayless is starting at the two for the Toronto Raptors.

Welcome back to another edition of the NBA version of the Wire Troll, where each week you’ll get a healthy helping of Fantasy basketball waiver wire recommendations.

This week’s highlights include Stephen Curry finally showing a little something-something after a couple of lacklustre efforts (including a three-point stinker on Tuesday); the implosion of the point guard situation in Utah (leaving Jamaal Tinsley as the last man standing); and — still in Salt Lake City – the coming out party for Gordon Hayward, who looks like a very nice waiver wire snag right now.

As always, all players listed here are owned in 50 per cent or less of all Fantasy leagues on both ESPN and Yahoo! Okay, let’s rock…

Jerryd Bayless, PG/SG, Toronto Raptors: It’s been over two years since we last recommended Bayless, and while this season has been a disappointment for him so far (ankle woes, inability to steal Jose Calderon’s job), he’s been showing signs of life lately (notwithstanding a stinker on Friday). Bayless has started three of the past four games at the two, and had scored at least 14 points per game in four straight before sinking just 1-of-6 for three points on Friday. Still, the minutes were there (28), and I expect the production to follow. He’s been jacking up more treys this season and draining them at an impressive 40 per cent rate, so if Bayless maintains this starting role and keeps getting 25+ MPG, he’s going to help you.

Jordan Farmar, New Jersey Nets: Farmar’s a player I picked up about three weeks ago and then promptly dropped when it appeared his breakout game was a mirage. That was a mistake, because he’s getting plenty of burn off the bench and turning that PT into production. You wouldn’t normally think the backup to one of the best PGs in the NBA (Deron Williams) would be a worthwhile player in standard leagues, but think again. Farmar has seen at least 20 minutes per game in 14 of the past 15, and in each of the last 12. Last season, Farmar got a chance to play without D-Will, but this season the two have often shared the floor as Farmar has consistently played at a high level. On Friday, he canned 6-of-11 for 14 points with seven assists, three boards and a steal in 30 minutes. He wasn’t getting the burn earlier this season, but he is now, and is responding in a big way. How does a 46 per cent touch from downtown sound?

Ronnie Brewer, SG/SF, Chicago Bulls: Richard Hamilton has been extraordinarily fragile this season, and his absence – combined with Luol Deng also being out – is offering Brewer a chance to start and put up low-level numbers worthy of consideration in deeper formats.

J.J. Barea, Minnesota Timberwolves: Barea’s back from yet another injury, and his minutes – and production – are creeping up, so he makes an interesting stash in deeper formats, especially with the Wolves not afraid to go with a three-guard look.

Metta World Peace, SG/SF/PF, Los Angeles Lakers: The Lakers have struggled all season to get production out of their small forward spot, so they’ve turned to the man formerly known as Ron Artest the past three games. And while the results have been tepid, World Peace is showing enough to be considered in deeper formats. For starters, he’s getting much more PT, he’s shot it well the past couple of games (albeit, in very limited touches) and on Friday, he managed seven points, seven boards, a 3-pointer and a block. However, what’s happened to his FT shooting? He used to be solid from the charity stripe, but is struggling this season and missed all four of his chances Friday. Still, opportunity is often more than half the battle and MWP is getting that right now, so give him a look if you’re in a league of 16 or more teams.

Linas Kleiza, SG/SF, Toronto Raptors: The wonky knee worries me, but Kleiza has been instant offense off the Raptor bench when he’s playing. After missing Wednesday’s game, he returned Friday with a highly efficient effort, canning 6-of-8 from the field (including all three attempts from downtown) for 15 points – all in the second half. Toronto needs the scoring (especially while Andrea Bargnani is out), so that kind of effort is screaming for more PT. Kleiza will generally only offer help in points and three-pointers, but deep leaguers in need of scoring help should definitely give him a look.

Josh Howard, SG/SF, Utah Jazz: The dude is more injury prone than Super Dave Osborne, but with Raja Bell out, Howard is starting – and delivering – making him worth a look in all formats.

Kenyon Martin, Los Angeles Clippers: Attention, K-Mart shoppers: if you want to take a flier on him to see how he’ll fare in Lob City, go for it, but just remember, he’s old, injury prone and no longer an automatic Fantasy starter.

Jordan Hill, PF/C, Houston Rockets: Hill is another player I briefly snagged off the wire earlier this season before Samuel Dalembert rendered him redundant. However, in deeper leagues, Hill is once again looking like a potential pickup as he’s started to get some decent PT off the pine, averaging 20 MPG over the past five. We all know that Hill has not lived up to his billing as the eighth overall pick in 2009. Okay, we get that. But take a look at the recent noise he’s made: back-to-back double-doubles last weekend, eight points and five boards in just 13 minutes Monday and six points and 10 boards Wednesday. Friday was a bit of a dude offensively and on the glass for Hill, but he pitched in with some sweet peripherals (three blocks and a steal). Those are numbers that are worth consideration in 14-team leagues and if his PT rises a wee bit more, possibly even 12-team leagues as well.

Nikola Pekovic, Minnesota Timberwolves: Whether he’s starting or coming off the bench, Pekovic is establishing himself as the centre to own in Minnesota. The fact that he started the second half Friday – en route to a career game with 27 points, 11 boards, an assist and a steal – is only gravy for potential owners. This dude is going to be one of the hottest wire pickups of the weekend, and I am cursing myself for using both my waiver wire picks earlier this week because I doubt he’ll still be on the wire on Monday. Pekovic is a beast in the paint and after flirting with value from time to time, it looks like he’s putting it together now.

Derrick Favors, PF/C, Utah Jazz: Even with Big Al Jefferson back, Favors is getting burn as the sixth man in Utah, putting up occasionally decent low-level numbers, so give him a look in larger formats.

By RotoRob
This entry was posted on Saturday, February 4th, 2012 at 3:43 pm and is filed under BASKETBALL, RotoRob, The Wire Troll. You can follow any responses to this entry through the RSS 2.0 feed. Both comments and pings are currently closed.