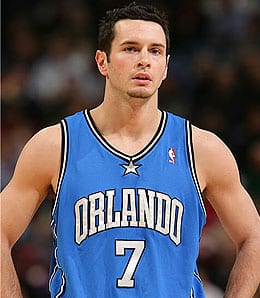 J.J. Redick is getting enough burn to consider for your team.

Boston’s frontcourt continues to fall apart with Mickael Pietrus being hospitalized for a “closed head injury.” Meanwhile, several big name players were sidelined this week, including Tony Parker, who got knocked out of Wednesday’s game with a hammy injury and was out Friday, and Rodney Stuckey, who won’t be back from his toe woe until at least Monday.

And now for our picks of the week, all of whom are owned in less than 50 per cent of leagues on both ESPN and Yahoo!

J.J. Redick, SG, Orlando Magic: Redick’s minutes are starting to creep up to the point where he’s now a viable choice at guard in 14-team formats. Expect low-level scoring numbers, a fair amount of treys and few dimes from the former Duke superstar.

Ben Gordon, PG/SG, Detroit Pistons: Gordon enjoyed a turn back the clock night Wednesday, canning all nine of his three-point attempts as part of a 45-point explosion. While he was unable to come close to duplicating that effort Friday, he still managed a decent 10-point, two-steal game. Of course, the seven turnovers kind of killed the buzz, but Gordon is a streaky dude, so grab him while he’s hot and ride the wave.

George Hill, PG/SG, Indiana Pacers: Need threes? Consider Hill in deep formats, and if he can overtake the struggling Darren Collison, he’ll become a must-add in every format.

Beno Udrih, PG, Milwaukee Bucks: This is for seriously deep leaguers only, but in limited PT, Udrih has averaged 7.6 points, 6.4 assists and 1.2 steals over the last five. Those kind of numbers have their place.

Daniel Green, SG/SF, San Antonio Spurs: We gave Green a nod a few weeks back, but he remains widely available and has been putting up nice numbers. He’s scored at least 13 points in four straight with at least six boards in the past two, and on Friday he also logged six dimes and a block in a healthy 36 minutes. Green has failed to hit from downtown in the past two, but is usually a fine source of treys. Give him a look because he’s supplying a well-rounded game right now.

Tristan Thompson, PF, Cleveland Cavaliers: Now that the young Canadian is getting to start for the Cavs, he’s been putting up some impressive numbers, with double-doubles in two of the past three games. Thompson has played at least 35 minutes in four straight games and has racked up five blocks over the past three. We suggested Thompson for the stretch run about five weeks ago, but now that he’s starting, he becomes a must-own.

Gerald Green, SG/SF, New Jersey Nets: The Nets have signed Green for the remainder of the season, and he’s getting enough burn to supply across the board production (except for assists), so give him a look in deeper formats.

Brandon Rush, SG/SF, Golden State Warriors: Rush is seeing more PT lately, and has responded with some points, some treys and – surprisingly – quite a few blocks lately.

Ben Wallace, PF/C, Detroit Pistons: We recommended Big Ben a few weeks back, and while this is just for deep leaguers, Wallace has recorded seven steals over the past two games and wound up playing 25 minutes Friday – more burn that usual. If he gets 20+ MGG, you’ll get a few boards, the occasional block and some swipes, so if you desperately need those cats in your deep league, give the old dude a look.

Ed Davis, PF/C, Toronto Raptors: Another deep league only option, Davis is someone we recommended last month, but his PT has been inconsistent. We like the boards – seven on Friday and 6.2 over the past five – and the blocks, with back-to-back multi-swat games. We still expect the Raps to give Davis a longer look down the stretch – they need to see what they have on their hands in their 2010 first rounder.

Kevin Seraphin, PF/C, Washington Wizards: yes, the centre position is pretty bleak right now, but even with Nene about in Washington, Seraphin has been putting up some decent numbers off the bench.

By RotoRob
This entry was posted on Saturday, March 24th, 2012 at 6:43 pm and is filed under BASKETBALL, RotoRob, The Wire Troll. You can follow any responses to this entry through the RSS 2.0 feed. Both comments and pings are currently closed.