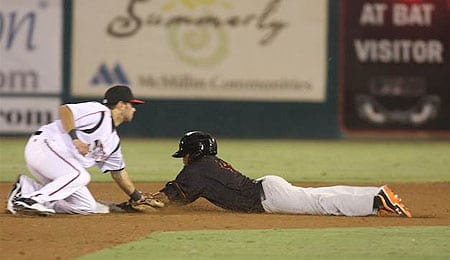 The sight of Billy Hamilton (right) sliding safely into second is a common one.

A couple of months ago in our Podcast, we discussed Billy Hamilton’s stolen base rampage at High-A.

Well, the shortstop got to 104 steals in 82 games (with 79 runs, 50 walks and a .323 BA) before the Reds finally figured out he was ready for Double-A, promoting him to the Southern League a couple of weeks ago.

Clearly, Hamilton was ready for this move. He had three hits Sunday, including a double, and scored the game’s only run from first base as Pensacola edged Mobile 1-0.

Hamilton is now batting .333 through his first 11 games at Double-A. He’s swiped another eight bases and has drawn more walks than he has strikeouts, showing an improved batting eye at the higher level.

For the season, he’s batting a combined .324 with an 865 OPS and a ridiculous 112 steals in 93 games. Vince Coleman had the greatest single season stolen base show in the minors, swiping bags 145 in 1983, a mark very much in jeopardy this year.

As a keeper league prospect, Hamilton has plenty of owners frothing at the mouth as they ponder how that stolen base total will translate into the bigs – especially at a premium defensive position.

He isn’t likely to get on base as much at higher levels either.

The other big consideration is that Hamilton isn’t expected to stick at shortstop as he moves up the latter. An outfielder that can potentially hit .300 with 75 steals still sounds pretty exciting, but obviously isn’t nearly as valuable as a shortstop who can.

All of this makes me wonder why the Hamilton owner in my keeper league refuses to even discuss the speedster (not that I’ve tried; he’s volunteered this information – that everyone is available except Hamilton). Wouldn’t he be wiser to get as much as he could for him now before a move to the outfield reduces his perceived value?

By RotoRob
This entry was posted on Monday, July 23rd, 2012 at 1:13 pm and is filed under BASEBALL, Minor Matters, RotoRob. You can follow any responses to this entry through the RSS 2.0 feed. Responses are currently closed, but you can trackback from your own site.