MLB Today: Bernie Williams is Back 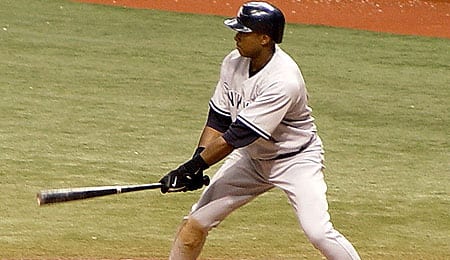 Former Yankee Bernie Williams will be appearing at the Futures Game — as a performer.

Former Yankee great Bernie Williams, who has followed his passions for music since hanging ‘em up, is scheduled to play the national anthem before the Futures Games next weekend. We’ll see if the five-time All-Star can whip the kids into a frenzy before the most highly anticipated game of the year for prospect hounds.

The end of interleague play for the season likely means the end of any value for Jason Giambi, unless injuries strike the Rockies. He’s only had eight at-bats in the last week, and while he’s doubled twice and driven in two runs, that’s simply not enough PT for him to be of use in any format.

Giambi was ridiculously productive in limited action in May, and continued to deliver in slightly more action in June, but the jig is up as his improved play has not translated into any extra opportunities.

Former football star (and sometimes baseball player) Deion Sanders believes the answer to rapper T.I. in trying to overcome his issues with the law is to put the lord first:

“I would definitely keep God first. Sometimes we have to redirect ourselves and just put God first. Every now and then, we can’t contain [earthly] desires and therefore we get lost.”

Apparently, Prime Time has humbled a bit since his playing days, hasn’t he?

On Thursday, Pat Burrell made his first start of the month, going 1-for-3 with an RBI, but on Friday, he was back on the bench. His PT has dropped every month of the season, so if for some reason you’ve kept him on your deep NL-only league roster, it’s time to jettison Burrell. To say Pat the Bat is struggling doesn’t do justice really. He’s only 34, but somehow seems much older given his overall decline as a hitter.

Is anyone else sick of this Roger Clemens trial already? Oh, how baseball loves to drag its all time greats down. Clemens’ real crime? Daring to challenge the Mitchell Report. This whole ordeal seems like such a colossal waste of time and money. I’m bored with it.

Alex Rodriguez owners have to be a tad worried with reports that he’s got a meniscus tear in his right knee – an injury that could require surgery and force him out of action for a month. A-Rod is going to decide whether he can play through it or not, and it’s really shitty timing as he was heating up in June before hitting a bit of slow period early this month. Rodriguez has not played in more than 138 games in a season since 2007, and it’s looking very likely that he won’t surpass that number for a fourth straight season. He’s enjoying a slight rebound this year, but at the age of 35 with the injuries mounting, it’s clear the end is in sight.

It’s time for us to give some props to Johnny Damon for another solid season. We expected him to be a top 65 outfielder, but he’s been nearly a top 35 player at the position and he’s over the hand injury that sidelined him for a couple of days, returning to the Rays’ lineup Saturday against the Yankees.

Damon is 37 now, but has gotten progressively better as the season has waned, and before he hurt his hand, he was on fire in the early going in July, batting .364. Don’t look now but he is almost a must-own player again. As an aside, how classy was it of the former Yankee to come out of the Tampa Bay dugout and applaud after Derek Jeter recorded his 3,000th hit?

Outfielder Pat Biserta, the Cardinals’ 24th round pick in 2010 but released after just one season, has wound up in the Indy Leagues, playing for the Newark Bears of the Cam-Am League. His first week and change hasn’t exactly gone well, so don’t look for Biserta to get another shot in organized ball anytime soon.

David Price, who didn’t look very sharp in his last start, is having a bit of a rough time Saturday in the Bronx, but hey, at least he’s etched his name in the record book by being the pitcher to give up Jeter’s 3,000th hit. I’m sure Price would have preferred it to be a meaningless two-out single instead of a game-tying home run. The long ball has been a slightly bigger issue for Price this season, but nothing his owners need to overly worry about.

Meanwhile, after a dominant May and an only slightly worse June, Price is definitely having some issues so far this month. And the way James Shields and Jeremy Hellickson have pitched this season, it’s really tough to call Price the team’s ace at this point, isn’t it?

Meanwhile, the Joe Girardi’s Yanks are looking to snap a two-game skid Saturday, a mini slump that has cost them first place in the AL East.

A couple of months ago, we marvelled at Alexi Ogando’s easy transition to starting. Well, there’s no doubt that he had more issues his second time through the league (4.26 ERA in June), but he’s turned things around with two pretty solid starts in July, and he needs to be picked up again if a panicking owner dropped him. The innings count is something that will need to be watched, but for now, Ogando is a fine play

It’s been a lost season for the Minnesota Twins, but we know one thing for sure: they still own the White Sox, winning a ninth straight game against their AL Central rival on Friday.

Bruce Billings, one of the players the A’s received when they sent Mark Ellis to the Rockies, has not performed well so far at Triple-A Sacramento. The 25-year-old right-handed reliever has been scored on in each of his first two outings for the River Cats as his highly unspectacular first season at Triple-A continues. Let’s hope that PTBNL the A’s also got in this deal pans out.

By RotoRob
This entry was posted on Saturday, July 9th, 2011 at 2:44 pm and is filed under BASEBALL, MLB Today, RotoRob. You can follow any responses to this entry through the RSS 2.0 feed. You can leave a response, or trackback from your own site.