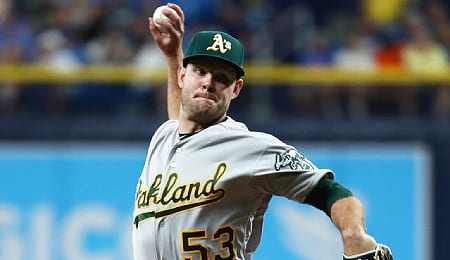 Tanner Anderson pitched his way off the roster this season. (NBC Sports)

Now that another minor league baseball season is in the books, it’s time to check in on some individual performances that caught our eye. In this installment, we’re going to focus on some extremely disappointing starting pitchers from the PCL.

After spending all of 2018 pitching out of the bullpen (mostly at Triple-A), Tanner Anderson was dealt to the A’s in November for a PTBNL. Oakland opted to mostly use him in the rotation at Triple-A, and things didn’t go well. Anderson managed to go 9-5 with a complete game through 16 starts and five relief outings, but with a horrid 6.00 ERA. He was brought up to the bigs a couple of times but went winless through five starts with a 6.04 ERA, so we sure hope you didn’t dole out too much FAAB to grab him. A 20th round pick by the Pirates in 2015, Anderson was coveted enough by Pittsburgh to earn a look in the 2016 AFL (see video below). Still a top 25 prospect in the A’s system at the start of the year, now he’s facing an uphill battle to return to the Show after being removed from Oakland’s 40-man rotation following the season.

Another arm that took a step back this season is Rogelio Armenteros, who looked like an up-and-comer in the Astro organization after making the All-Star Game at Double-A in 2017. The 25-year-old Cuban had some home run issues at Triple-A last year, but his results were good. This season, he got hit way harder, seeing his ERA soar to 4.80. However, Armenteros wasn’t bad in his first taste of the bigs, recording a 4.00 through five games, including a couple of starts. Houston is stacked right now, so he’s blocked, but either way, it’s not clear he’s ready for a full-time big league role after his performance this year. For now, the righty is an important Triple-A pitcher for the organization, but his prospect status is fading.

Yet another disappointment this year was the performance of Jaime Barria. He had an impressive rookie campaign with the Angels last year, spending most of the season in the rotation and winning 10 games. This year, however, Barria bounced back and forth between the Halos and Triple-A, and was awful for both teams, especially in the minors, despite showing better control in his 10 starts. He spent most of his time in the rotation in the bigs, racking up over 70 innings, but saw his ERA soar to an unsightly 6.14. At this point, Barria is barely a top 175 starter. Signed out of Panama in 2013, he’s a control pitcher, and having just turned 23 a few weeks ago, is definitely young enough to bounce back and have a career. But Barria really needs to limit the dingers to have a shot to succeed.

The Rockabye Baby! series of CDs launched in 2006, featuring instrumental, lullabye versions of classic rock bands. One of the first of the series, released in 2006, was renditions of Pink Floyd. From there, we have “Speak to Me/Breathe.”

Now it’s your turn. Let us know in the comments below which PCL pitchers you felt took a step backward this year.

In his start Monday, Ferreras lasted five innings for the first time this season, and while he gave up five hits and three runs, he matched his season-high with six strikeouts while enjoying his first walk-free outing of the season.

While that mishap might make some question his smarts, there’s no denying he’s bounced back nicely and is enjoying a very fine first full season at Triple-A, which puts him squarely on a collision course with Fenway Park very, very soon.

By RotoRob
Posted in BASEBALL, Minor Matters, Prospects, RotoRob | Comments Off on Minor Matters: Bryce Brentz Ready for the Show

Minor Matters: Juan Perez Holding His Own at Triple-A

Last season, Perez repeated Double-A, but was much more successful, scoring 65 runs in 126 games while making better contact. His work on the basepaths, however, left something to be desired (caught 15 times in 33 stolen base attempts).