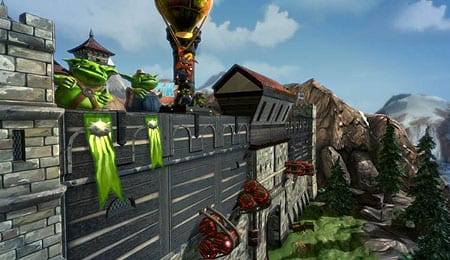 Our brilliant plan to put explosives all over the castle walls can’t possibly backfire!

As much as people like to build things, there’s an unmistakable joy in watching them fall down. Games like dominoes and Jenga may look nice standing up, but the real reason you take them out of the box is to watch them fall over, and ideally make someone else clean up afterwards. While those games are all well and good, what if we added the destructive power of a ballista and some good old-fashioned castle crashing? In that spirit, Iron Galaxy brings you Wreckateer, a medieval-themed, physics-based puzzler that serves as the second title in Xbox Live’s Summer of Arcade.

Controls are a defining factor for any Kinect game; without a good setup you might as well turn off the TV and wave your arms around until you’re satisfied with what you’ve accomplished. On screen your character is set up behind a ballista, standing in a half circle segmented into two areas. Walking up and holding out your hands grabs the ballista and walking back primes it at full power, allowing you to then aim by moving left and right or affect its pitch in much the same manner. To fire just put your arms out to the sides. During flight you can spin your shots by swatting at the projectile, changing directions and adding or reducing lift. Different ammunition for your ballista has special properties that can be used mid-flight to help the destruction along, activated by raising your arms in a “V” position.

Although I’m sure people will have their own experiences with the Kinect, I had zero problems getting the game to read my actions. Everything I did the game picked up, which is a nice change for a Kinect title. My only gripe stems from how the game tells you to use some of the special ammunition — specifically the flying shot. When you get it, the game leads you to believe you control it much like you would if you were an airplane. When doing this however, I found it extremely difficult to control pitch, and a few gold medal scores were missed because of it. I blindly stumbled across the fact that pitch is controlled just by raising your arms, not tiling your body. More detailed explanations of these tools would’ve been nice to have. All things considered, though, the controls work great.

War machines causing massive destruction may not paint the prettiest pictures, but Wreckateer manages to show a brighter side of the situation. Castles, walls and houses are conveniently placed around the environment for your destroying pleasure. Structures crumble and explode, and you can even punch holes in objects to hit things on the other side.

Various goblins infesting the castles also add to the fray, jumping around and adding a little life to the environments. It’s a fairy tale setting, and the game does a decent job of making it feel that way. There were a couple of rough patches though, as when viewing the rolling hills and background the quality would drop, displaying blurry or unsightly textures popping up along the countryside. It’s also somewhat disappointing to have structures just disappear in clouds of dust when destroyed instead of turning into debris on the ground.

Wreckateer has a decent soundtrack as well. Seeing as it is set in medieval times and that you’re destroying castles, a renaissance theme is used throughout. Wreck and Tinker, who act as your guides throughout, also add colour commentary. They spout bits of information at the start of every level and also note spectacular events mid game like explosions or huge destruction. They’ll even comment on you getting an achievement, which was pretty surprising.

However, the game tends to play it a little too safe with the audio with largely bland tracks… spicing it up every now and then would have been nice. Plus, while Wreck and Tinker have their moments, the constant rambling becomes trying after a while.

The basic premise of the game is that you’re a Wreckateer in training, dubbed Rock Polisher by your trainers. A Wreckateer’s job is to destroy stuff, and castles aren’t exactly in short supply. It turns out the kingdom’s castles are infested with goblins, lots of them, and the only way to get rid of said infestation is to smash the entire thing to the ground and start over.

Each level runs on the same premise: smash as much as possible with your shots to obliterate the goblin infestation, firing shots with your ballista and carefully guiding them with swipes of your hands. You get six magic projectiles at your disposal to help along the way, with things like exploding shots and flying shots to make the destruction all the more catastrophic. Every three goblins net you a mulligan, which allows you to retry shots that don’t go exactly as planned.

Besides just castles, floating icons are littered across the environments as well, giving you quick boosts like points, or more worthwhile bonuses by adding different effects to your shots, making you think and plot out shots for more effective rubble making. That’s not the only way to get bonuses either, as you get rewarded just for doing random things like having a super curved shot or hitting a goblin straight in the face.

There are tons of challenge here, with three medal rankings on every map along with a fourth high score rank that’s pretty tough to beat. Levels change it up a lot, and in the later stages, the difficulty curve rises to require precise shots just to hit the lowest rank. If single player isn’t you’re thing, you can also play local co-op for some head-to-head castle smashing with a friend on any of the games levels.

Wreckateer is also the first game to feature Microsoft’s new “Avatar Famestar,” a program being implemented in arcade games. Doing certain in-game feats and challenges gives you fame, which can then be used to unlock avatar props and items. Fame carries over between games, and past titles like Full House Poker and A World of Keflings are also being supported.

There are a few shaky bits, as difficulty progression becomes crushing near the end, and the repetitive nature of the game is somewhat of a downer. Still, Wreckateer is a solid title for any age to enjoy and is an effective excuse to give the Kinect some playtime.

By Justin Redmon
This entry was posted on Tuesday, July 24th, 2012 at 2:28 pm and is filed under Justin Redmon, Video Game Reviews. You can follow any responses to this entry through the RSS 2.0 feed. Responses are currently closed, but you can trackback from your own site.