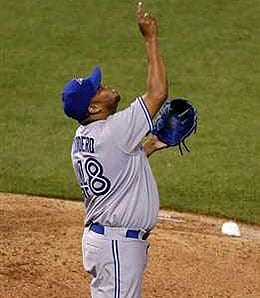 Francisco Cordero knew if he pointed at the sky enough, he’d get to close again.

It’s been a rather quiet week on the trade front. Is this the relative calm before the storm or will the new CBA and its influence put a restraining order on the deadline deals? Only time will tell, but we did see some bullpen shuffling in the past few days. Brett Myers was moved to the White Sox, where he’ll no longer close, and Francisco Cordero lands in Houston and inherits Myers’ old job. Is Jonathan Broxton the next closer on the move? It’s already been a crazy year from a closer perspective and clearly there’s more insanity to come.

Without further ado, let’s get to this week’s waiver wire recommendations.

Coco Crisp, OF, Oakland Athletics (CBS: 37 per cent owned, ESPN: 35 per cent): Crisp has dealt with myriad health issues this year, but finally is well enough to be a regular contributor for the surprising A’s. If you’re looking for a boost in the runs scored and stolen base categories he has the potential to be a solid contributor down the stretch. Don’t forget that Crisp swiped almost 50 bags last year.

Francisco Cordero, RP, Houston Astros (CBS: 15 per cent owned, ESPN: 20 per cent): The Jays traded Cordero and a slew of prospects to Houston with the Astros subsequently moving Brett Myers to the White Sox, opening the door for Cordero to close again. Based on the level of success from Cordero that we saw when he was with Toronto this could be a rather short-term situation. Set the bar low and anything above that becomes a bonus.

Jemile Weeks, 2B, Oakland Athletics (CBS: 53 per cent owned, ESPN: 29 per cent): Ownership levels for Weeks have dropped from a high of 92 to 53 per cent since the start of the season and for good reason. Coming off a solid rookie campaign, expectations were rather high for the young speedster, but alas — like his brother Rickie — he has stumbled. We’re expecting to see some solid improvement in the second half.

Francisco Rodriguez, RP, Milwaukee Brewers (CBS: 43 per cent owned, ESPN: 50 per cent): Since taking over for Milwaukee closer John Axford, Rodriguez has managed eight strikeouts in five IP and contributed a pair of saves. K-Rod is currently the man in the ninth for the Brewers and should be owned and starting in all formats, but be very cognizant of the fact that his name has been bandied about in trade rumours and that Axford has the potential to return to the role down the road.

Todd Frazier, 1B/3B/OF, Cincinnati Reds (CBS: 21 per cent owned, ESPN: 4 per cent): Joey Votto’s knee injury and subsequent surgery is a huge loss for the first-place Reds. The full-time at-bats combined with the power we saw (10 homers in 205 at-bats) while he was replacing Scott Rolen makes Frazier an intriguing option in deeper formats.

Joe Blanton, SP, Philadelphia Phillies (CBS: 53 percent owned, ESPN: 17 per cent): He’s heading into a two-start week and appears to have favourable matchups as he squares off against Barry Zito and Jair Jurrjens. If you’re looking to stream a starter this week there are far worse options.

Chris Tillman, SP, Baltimore Orioles (CBS: ESPN: 2 per cent): Two solid outings sandwiched around one stinker. With the Rays next on the schedule, Tillman is worth a look if you’re trying to coax an extra win out of this week.

Travis Snider, OF, Toronto Blue Jays (CBS: 10 per cent owned, ESPN: 1 per cent): Jose Bautista hit the DL with a wrist injury and Snider finally found himself back on the big league roster. The question is how long will he stick around?

Jared Burton, RP, Minnesota Twins (CBS: 12 per cent owned, ESPN: 12 per cent): Matt Capps has returned to the DL with a continuation of his shoulder woes and has been shut down indefinitely. If you’re in need of a sprinkling of saves down the stretch grab Burton as Twins Manager Ron Gardenhire is playing the matchup game in the ninth.

Greg Holland, RP, Kansas City Royals (CBS: 10 per cent owned, ESPN: 3 per cent): The rumour mill keeps suggesting Broxton will be on a new team by the end of the month. If you’re looking to do some save speculating, buying into Holland while he’s still relatively cheap is a solid play.

J.A. Happ, SP, Toronto Blue Jays (CBS: 20 per cent owned, ESPN: 1 per cent): The AL East is a tough gig for the best of starters but Happ will be the beneficiary of playing in front of an offense that can score runs.

Brett Anderson, SP, Oakland Athletics (CBS: 16 per cent owned, ESPN: unowned): The clock officially started Saturday with Anderson’s first rehab outing at High-A Stockton. In his debut he pitched two innings, allowing four hits and no strikeouts. We’ve seen mixed results from pitchers returning from Tommy John surgery, but if you have the bench space you could be looking at five or six starts from a very fine hurler down the stretch.

Neftali Soto, 1B, Cincinnati Reds (CBS: 1 per cent owned, ESPN: unowned): Soto has had a rather disappointing year down on the farm, managing just 12 homers with 46 RBI and a .232 BA. Should Frazier stumble as Votto’s replacement, Soto could be an option (albeit a very long-shot one) for the Reds.

Wilton Lopez, RP, Houston Astros (CBS: 5 per cent owned, ESPN: 1 per cent): Since returning from the DL he’s now pitched four shutout innings with three strikeouts. Can the newly acquired Cordero get the job done? Lopez is next in line and worthy of a speculative pick in deeper leagues.

By Tim McLeod
This entry was posted on Sunday, July 22nd, 2012 at 1:45 pm and is filed under BASEBALL, The Wire Troll, Tim McLeod. You can follow any responses to this entry through the RSS 2.0 feed. Both comments and pings are currently closed.