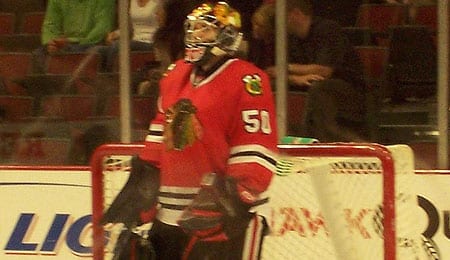 Recommending Corey Crawford way back at the beginning of December was one of our better calls.

Wow, the NHL season has just flown by, as has the NBA season, and with that in mind I want to thank my basketball counterpart on RotoRob.com, Mr. Buck Davidson, who has been a model of consistency and has provided in-depth his knowledge all season for the many Fantasy basketball owners out there.

This season has seen a little of everything. We have witnessed the most injuries ever at any particular juncture of a season when the wounded reached 153 on March 10. Sidney Crosby, the biggest star in the game, has been out since January 5 with a concussion, and that’s been the toughest blow, but injuries have played such havoc to Fantasy teams all season.

Every night there seems to be a player going off the ice with some malady or another. Naturally, concussions have been the biggest injury du jour with over 85 players having one or multiple concussions this season. Very quietly, knee injuries have been a very close second with 83 players losing time because of a health woe of this nature. Combine these two and, well, that is a lot of time missed right there.

Fantasy hockey general managers have had to adapt to what seems like a massive amount of bad news that has come in waves. Still, there were players that came up huge to ride a wave to success. It is often forgotten how important the waiver wire became this season, more so than at any time over the last decade.

Think of the amazing stories that have developed, often first foretold in The Wire Troll. Goalies like Corey Crawford (Chicago Blackhawks) and Al Montoya (New York Islanders) were recommended in previous columns and have magically been successful for their teams while the original starters were felled by either injury or inconsistent play.

In the forward ranks, there were so many break outs this season. Brad Marchand (Boston Bruins) came out of nowhere to score 20 goals. Even Mark Recchi, at the age of 43, crawled back to Fantasy prominence with the aid of Marchand and Patrice Bergeron. Rookies like Michael Grabner, Jeff Skinner, and Logan Couture have emerged not only as very accomplished rookies, but hockey players that could very well be among the league’s elite talent in the future.

With just a week to go, we considered many different options for our final Wire Troll column of the season. We have usually given out a good three-to-six solid waiver wire recommendations per week. The goal is to get you ready for the week with guys no one else may necessarily find.

Yes, we have had our share of misses. This is a very inexact science, ladies and gentlemen and it doesn’t get any easier to pick our last three of the season. The simplest reason for only going with a final three is because waiver wires should be deeper now that most teams are eliminated or few teams are in contention in Roto leagues.

That does make sense, right? Right! Well, since this is the last one, we will go out quickly, running out like a bat out of … well… Hades.

Steve Downie, RW, Tampa Bay Lightning: We know that Downie has struggled all season with injuries but he is healthy at the most crucial time. Over the final week, Tampa has four more contests against teams that the right feisty winger should excel against. Downie’s ownership levels plummeted when the injuries started, so he will be available almost everywhere (say, 80-to-85 per cent availability in most leagues). He is like a poor man’s Corey Perry when healthy, so it may be worth a shot.

Mike Santorelli, C, Florida Panthers: Santorelli is probably one of the few Panthers that shows up night in and night out. This is yet another Nashville product that found success somewhere else (see Rich Peverley as Exhibit A… or is that C or D by now? I can never tell). Santorelli has 18 goals on a team that looks like an ECHL or AHL team at times. With a little more talent around him, he could crack 25 goals and maybe 45-to-50 points next season, which would be pretty good. Over the final week, Santorelli should crack the 40-point plateau, so go ahead and pick him up.

Ray Emery, G, Anaheim Ducks: It looks more and more like Jonas Hiller (vertigo) will have problems playing at the level required to be successful in the playoffs. Therefore, this looks like Emery’s team from here on out. This week will be a great chance to ride the Anaheim wave as the Ducks are playing well. In deeper leagues, Emery is probably still available as most GMs are entrenched with their goaltending. Roll the bones, ladies and gentlemen!

Well, aloha for now, everyone and good luck with your leagues. We may do a special Mini Wire Troll on Friday as a quick weekend primer. Stay tuned and if you are in your Finals, a hearty good luck from yours truly and do not forget to listen to The Program on Blog Talk Radio Sunday Night for more Fantasy hockey insights. Thanks so much.

By Chris Wassel
Tags: Mike Santorelli, Ray Emery, Steve Downie
This entry was posted on Sunday, April 3rd, 2011 at 12:03 pm and is filed under Chris Wassel, HOCKEY, The Wire Troll. You can follow any responses to this entry through the RSS 2.0 feed. You can skip to the end and leave a response. Pinging is currently not allowed.