Wire Troll: One More From the Road 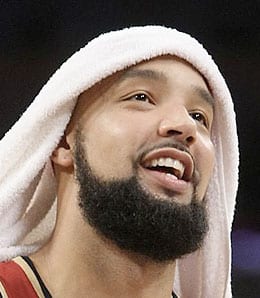 Drew Gooden could be a saviour for your Fantasy team.

Welcome to the Week 24 edition of the Wire Troll, our weekly look at players that may be available on your league waiver wire, but could see a spike in Fantasy value due to a variety of circumstances.

If you’re reading this, congratulations are in order, since your Fantasy Hoops team is doing well enough to hold your attention as the NBA season reaches its wane. Whether your Roto team is fighting it out for a top-three finish, or your head-to-head squad has made that deep playoff run you dreamed about back in October, big ups to you for making it happen; hopefully some of the advice we’ve dished out in the Troll this season helped you out along the way. Don’t stop now, though: The playoff thing is nice and all, but there’s a reason why no one thinks of the Dallas Mavericks as one of the league’s great franchises. It’s great to be in it, so why not win it? After all, if you don’t win, you’re just another bit player in someone else’s highlight reel.

Well, it’s been a fun ride again this year, gang, but the Troll is shutting down after this week’s edition. I want to say thanks to everyone that has taken the time to drop us a note and say that they dig what we’re doing here, and I want to send an especially big shout-out to my cohort Chris Wassel over at the Wire Troll’s hockey edition. Thanks to Chris’ sage advice, the Troll brought home a stack of Fantasy hardware in his very first foray into the world of Fantasy NHL — including a dominant Rotisserie performance by his flagship team, the Phrozen Phrenchmen. Bravo, et bon travail mon ami.

And, of course, no farewell would be complete without a nod to our beloved boss RotoRob, whose patience, leadership, patience, guidance, and of course… patience — made this another enjoyable season. Props to you, big guy… here’s hoping that next season will be Marvin Williams’ breakout campaign — and that FatHead will surely follow.

And if anyone is wondering about the whimsical title I’ve chosen for this final edition of the Troll, it’s a tribute to my favourite band. My journalistic meanderings have unfortunately linked me to certain non-singers that show up at third-rate awards shows in a freaking egg, so I thought it prudent to set the record straight. Sit through the ad, (the “mute” button is in the upper right of the frame) — your patience will be rewarded. Hope you like grits with your guitars… and stick around for the moment when rock-and-roll piano achieves perfection (you’ll know it when it happens). If your toes aren’t tapping by then end, I’d suggest you check your pulse. Enjoy.

Good luck with baseball if that’s your thing, and here’s hoping that we have an NBA season to write about once the 2011 World Series wraps up.

Drew Gooden, Milwaukee Bucks: Gooden has been one of Fantasy’s biggest duds this season, but his lack of production has been due almost entirely to a bout with plantar fasciitis. He had missed 32 straight games before returning to the court March 28, but he was able to shake off the rust rather quickly. The veteran pulled down 11 rebounds and racked up 22 points in just his second game back — though it’s worth noting that his big line came against the woeful Raptors’ defense. If he can stay healthy, Gooden should be at least a modest source of points and boards the rest of the way, and he’s worth adding deeper Fantasy formats. Note: Gooden is not eligible at centre in ESPN leagues.

Andray Blatche, Washington Wizards: Blatche missed 10 games with a shoulder injury, and just returned to the starting lineup Friday. Since this is the season for Fantasy owners to panic and drop players whilst chasing a playoff win, it just may be that Blatche is languishing on your league wire. Remedy that situation, please: In his first game back as a starter, Blatche exploded for 36 points and 19 boards against Cleveland. He should be fine health-wise the rest of the way, and can give your Fantasy team a boost if you’re lucky enough to get him.

Brandon Bass, Orlando Magic: Bass has drifted in and out of Fantasy relevance all season long, but it looked like the emergence of Ryan Anderson would scuttle Bass’ value for the duration. Not so fast, though: Bass is back on the radar screen, averaging 14.6 points and 5.3 rebounds over his last seven games. While those aren’t staggering numbers, when one factors in Bass’ 51.6 field-goal percentage this season, and the fact that he’s shooting 82.3 per cent from the stripe, it’s easy to see that he definitely holds some value in deeper Fantasy formats. Note: Bass is also eligible at centre in Yahoo! leagues.

Jared Dudley, Phoenix Suns: Dudley has been on a fine roll lately, and his outstanding play has reduced Vince Carter to little more than an afterthought in the Phoenix rotation. Over his past six games, Dudley has averaged 17.2 points, 5.8 boards, 2.2 steals and 1.2 treys. The Suns are out of the playoff hunt, and may shut down Carter and point guard Steve Nash in the near future. They seem willing to allow Dudley to rack up big minutes, though, and Fantasy owners should capitalize on all that floor time.

Maurice Evans, Washington Wizards: The Wizards have been battered by injuries to several key players, so guys like Evans have found room to post big numbers as the teams plays out the string. The veteran swingman is not a special talent, but he has cobbled together a decent average line over his past five games: 15.8 points, 5.2 rebounds and 1.6 treys. The 32-year-old Evans has never averaged more than 9.3 points during his NBA tenure, so this recent run of success is undoubtedly an anomaly. But, it’s Fantasy playoff time, and we don’t care much about the future and even less about the past. If the dude is delivering the goods, he’s worth a look for our lineup. Just be prepared to cut bait if the Wizards decide to go in another direction.

Jordan Farmar, New Jersey Nets: Nets head coach Avery Johnson has said that he wants to evaluate how his team plays both with and without star point guard Deron Williams the rest of the way. That’s good news for Farmar, who has been outstanding in D-Will’s stead this season. As a starter, Farmar has averaged 13.5 points, 8.9 dimes, 1.6 treys and 1.2 steals, and he has shown that he can absolutely run an NBA attack… well, if you consider the Nets an NBA-calibre offense, anyway. Add Farmar in deeper leagues for now; if the Nets announce that they are shutting Williams down, grab Farmar immediately in all formats.

By Buck Davidson
This entry was posted on Saturday, April 2nd, 2011 at 5:56 pm and is filed under BASKETBALL, Buck Davidson, The Wire Troll. You can follow any responses to this entry through the RSS 2.0 feed. You can leave a response, or trackback from your own site.