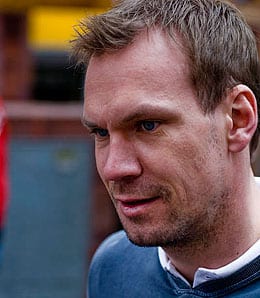 The 2010-2011 Fantasy hockey season has seen everything…and do I mean everything. Just when you think it could not get any weirder, another event occurs that baffles the mind. During times like these we often joke about this mythical Hockey Sandman, but really he is not too far off from some. This is how the cycle kind of goes. It really is like the ocean tides…except less predictable.

There is that season where the numbers just plummet for an old guard player. These are guys that have just been steady for so long that you sometimes do not see their decline coming, if at all. It just happens. What players have gone so badly into the tank that you wonder what will occur to them next? Well, before we go trolling, it is time to explain why some may have to go trolling in the first place.

Daniel Alfredsson, RW, Ottawa Senators: Remember when Alfie would get right around a point a game? Yes, so do I. This once proud Ottawa Senator has gone right into the tank and has captained this team right off the plank. What disturbs me is how much even he has quit in this recent downturn. This season numbers are abysmal at 28 points (14G, 14A) in 49 games. That is only 0.57 points per game which is way down from the 1.01 PPG he put up last season and 0.96 in 2008-09. If there is any doubt, let it go: the twilight is near for this Captain, please speak now or forever hold your peace. Amen!

Our Verdict: Sandman he comes!

Martin Brodeur, G, New Jersey Devils: Sleep with one eye open, gripping your pillow tight. That is what Brodeur was doing during the first half of the year. In 76 starts last season, he was 45-25-6 with a 2.24 GAA and a .916 save percentage. Toss in nine shutouts and there was a reason why he was the toast of the goalie landscape. On paper, all looked rosy going into this season, but that is why they play the game. Instead, he got off to a disastrous start with elbow injuries and a god awful 5-18-2 record. Slowly, Brodeur has begun to right the ship, going 4-0-1 in his last five starts and his numbers stand at a 2.87 GAA with a .894 save percentage. He also has four shutouts.

Our Verdict: Not quite sandman time just yet.

An Alumnus From Last Year

Nicklas Lidstrom, D, Detroit Red Wings: It looked like the end last season when Lidstrom had nine points around Christmas. Then he popped in about 40 from that point on and people forgot about the early struggles. All St. Nick has done has kept on going from there. He already has 42 points in 47 games for a Red Wing squad that is again riddled with injuries. Yes, Lidstrom is a -2 but has 26 points on the man advantage already so the +/- can be overlooked. What is scary is that even at the age of 40, he is a cut above the rest and some of those players are 10 to 15 years his junior. That is a mark of a sure fire Hall Of Famer and one of the greatest defenseman in NHL history.

Now that we are past all of that fine work, there is some business to actually “troll” this week. This duo just seems incredulous to some, but yet they exist and are on here this week as a special bonus to our loyal readers. These are their stories.

Grant Clitsome, D, Columbus Blue Jackets: Do not let the sexy name fool you, this 25-year-old can play some. Yes, he has five points in six games and that does not seem like a fair sample size, but with the injuries in Columbus and the overall ineffective play of its defensemen, Clitsome has a shot here. No one can really believe we are even typing his name, but in a season where there are anomalies all over the place, this Columbus Blue Jacket may just have a shot to surprise us all.

Brad Marchand, C, Boston Bruins: Here is another guy that has come out of relative obscurity, but has found a niche and has run with it. The initial Fantasy lines do not blow you out of the water, but 20 points in 44 games with a +17 is pretty respectable for a guy that’s not a top six forward in Beantown. Yet in 11 January games, Marchand has five goals, two assists, and is a +11. Those numbers are enough to be noticed and with his availability over 95 per cent in just about every known nook and cranny, he is a simple pickup yet a great one in so many leagues. Why not take a shot because, after all, he has to be better than guys like Alexei Kovalev, right? Yeah, we thought so!

Next week we strike back again with another Wire Troll. Whatever we have cooked up will certainly not be dull but may have an All-Star feel to it. Have a great week and if you have any questions for your Fantasy hockey league, do not hesitate to ask using the “Fantasy Question?” link in the left column or on Twitter. Good luck.

By Chris Wassel
This entry was posted on Monday, January 24th, 2011 at 3:12 pm and is filed under Chris Wassel, HOCKEY, The Wire Troll. You can follow any responses to this entry through the RSS 2.0 feed. You can leave a response, or trackback from your own site.