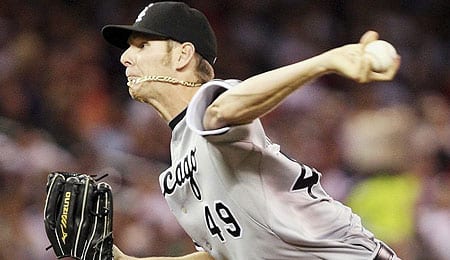 Chris Sale could very be earning saves for the ChiSox this season.

The 2011 RotoRob MLB Kit churns away with the release of Part III of our Top 50 Prospects list. So while Chris Carpenter owners start worrying about their hurler, let’s check out prospects 30 through 21 on our countdown.

You can find prospects 40 through 31 here.

And prospects 50 through 41 are here.

30. Chris Sale, RP, Chicago White Sox (NR): Back in January it looked like Sale was a candidate to close for the ChiSox, and that’s something to watch closely in Spring Training. His long-term future will be in the rotation, but his ability to pitch in late innings – as he did in his first taste of the majors last year – makes him a very intriguing player for 2011. Sale first burst onto the scene with a brilliant showing in the 2009 Cape Cod League, a performance which prompted the Sox to take him 13th overall in last year’s draft. He’s been on the fast track since, tearing through the minors last year and arriving in the Show after just 11 appearances between High-A and Triple-A. And in looking at what he did in Chicago, Sale clearly wasn’t rushed, as he adjusted to each jump with ease and even improved his numbers after arriving in the majors. He may not have as much upside as some of the players above him, but Sale came into the professional ranks about as MLB-ready as a prospect can be.

29. Aaron Hicks, OF, Minnesota Twins (24): We had Hicks in the top 25 last year, but after he repeated Class-A in 2010, he’s slipped slightly in this go round. Taken 14th overall in 2008, Hicks was considered the best high school outfielder/pitcher prospect in the LA area since Darryl Strawberry. He stayed a bit more healthy last year, but again couldn’t avoid injury. However, I love the patience Hicks showed last year; he’s clearly ready for High-A, and it wouldn’t surprise me at all if he starts really shooting up the rankings this year – provided, of course, he can avoid injury. In time, Hicks could provide a decent BA with 25-25 potential.

28. Brandon Belt, 1B, San Francisco Giants (NR): Belt’s first professional season was so phenomenal that the Giants may push Aubrey Huff to the outfield to open up first base for the kid. Amazingly, Belt was only a fifth round pick in 2009, so before the 2010 season he was truly off the radar. But that all changed last year when he dominated High-A with an OPS of 1120, showing batting average (.383), power (28 doubles, four triples and 10 homers in 269 at-bats), speed (18 steals) and superb strike zone judgment (58 walks against 50 strikeouts). Belt was promoted to Double-A, and didn’t slow down much, recording an OPS of 1036 in 46 games. And while he only hit .229 in a late-season trial at Triple-A, he drew enough walks and hit with enough pop to record an OPS of 955. This 22-year-old’s bat is special enough that he may force his way onto the roster of the defending World Champions this spring, if not at first base, then perhaps in the outfield.

27. Lonnie Chisenhall, 3B, Cleveland Indians (NR): Originally a shortstop, Chisenhall was a risky pick by the Indians in 2008 because of his checkered past. Last year, he enjoyed a fine campaign at Double-A, cementing his status as the third baseman of the future for the Indians. Many experts list Chisenhall much lower than we do, but we believe he has plenty of untapped power potential that will emerge as he grows into his frame. Don’t expect to see him in Cleveland until at least September, and perhaps not until some time in 2012, but make no mistake: he’s a legitimate prospect worthy of attention in keeper leagues.

26. Kyle Gibson, SP, Minnesota Twins (NR): Gibson has a tremendous pitcher’s build (6’5”, 210) and the look of a future front-of-the rotation hurler. Taken 22nd overall in 2009 by the Twins, last year was Gibson’s first as a pro and he tore his way through three levels, getting all the way to Triple-A by season’s end. Clearly, he’s headed to Minnesota in a real hurry, and will likely emerge as a No. 2 starter within the next couple of years. In the pros, Gibson hasn’t flashed the same kind of strikeout numbers that he did at college, but his phenomenal command and superb hit rates allowed him to post an ERA well below 2.00 at both High-A and Triple-A.

25. Shelby Miller, SP, St. Louis Cardinals (NR): Since being taken 19th overall in 2009, Miller has been one of the Cards’ top prospects, but last season he progressed enough to crack our list for the first time. Some are a bit more bullish on Miller than I am, and there’s no doubt he’s the shining star of a fairly barren St. Louis system, but I want to see how he does at High-A and Double-A before I’m ready to go completely gaga over him. Having said that, it’s impossible to ignore his 140 strikeouts in 104 1/3 IP last year, even if he was only pitching in the Class-A Midwest League.

24. Wil Myers, C/OF, Kansas City Royals (NR): Yes, it’s another Royal prospect. Did we mention they are stacked? Myers, a third round pick in 2009, made huge strides last year, tearing through Class-A, before ramping it up even further in High-A. Blessed with superb bat speed, Myers bashed his way to a .346 BA in 205 at-bats at High-A, and he wound up with 14 homers and 12 steals combined at the two levels – showing an all-around game you don’t often see from a catcher. Unfortunately, his bat is so advanced that the Royals have decided to move him to the outfield to expedite his journey to the majors. Obviously, it hurts Myers’s Fantasy value, but also speaks to how high KC is on this kid. He could even get a look this September if he continues to rake like he did last year.

23. Brett Lawrie, 2B, Toronto Blue Jays (NR): Back in 2009, we suggested Lawrie might not be major league ready for a few years, and while his trade to native Canada makes for an interesting story, the fact that this 21-year-old’s makeup has been questioned cements our belief that he’s still a little ways from contributing in the bigs. The 16th overall pick in 2008, Lawrie has some real potential as a power-hitting middle infielder and his addition – and continued development – should help brighten Toronto’s future. Last year, in his first full season at Double-A, Lawrie flashed almost across the board skills, scoring plenty of runs, delivering a ton of extra-base hits, stealing plenty of bases and hitting for a fine average. The only thing missing from his arsenal was a higher walk rate and better strike zone judgment. That tells me that he needs another full season in the minors (I assume at Triple-A) before he’s ready to hit in the Show. We could see Lawrie in September, but will have to wait until at least 2012 before he’ll be in contention for a job in Toronto.

22. Zack Britton, SP, Baltimore Orioles (NR): Three years ago, we first identified Britton as a prospect to be tracked, and he’s done nothing in the past two seasons to dissuade us from that contention. The fact that this lefty breezed through both Double-A and Triple-A last year has forced us to finally include him in our top prospect list. The 23-year-old’s bread and butter pitch is a sinker that he comfortably throws in the low 90s but can crank up as fast as 95 mph on occasion. The Orioles’ system isn’t nearly as deep as it was a year ago, partially because some key prospects have arrived in Baltimore. And you can bet that Britton is very close to joining them; expect to see him in B-More by mid-season or earlier if injuries to (or ineffectiveness by) some of the O’s other starters force the team’s hands.

21. John Lamb, SP, Kansas City Royals (NR): Did I mention the Royals are stacked with prospects? Lamb is another top notch lefty that should help the Royals move into contention in a few years. He’s got a fastball that he throws in the 90-93 mph range, a curve and a changeup, the latter two of which offerings that he shies away from when he’s behind in the count. Last year, Lamb pitched more like a lion at Class-A and High-A before struggling to adjust to Double-A late in the season. His command was off the charts, particularly in High-A with 90 strikeouts against just 15 walks in 74 2/3 IP. Expect Lamb to arrive in KC sometime in 2012.

By RotoRob
This entry was posted on Thursday, March 3rd, 2011 at 4:54 pm and is filed under 2011 RotoRob MLB Draft Kit, BASEBALL, Cheat sheets, Prospects, RotoRob. You can follow any responses to this entry through the RSS 2.0 feed. You can leave a response, or trackback from your own site.