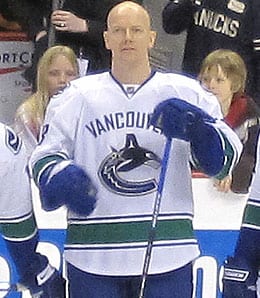 What would you say to Mats Sundin if you won a conversation with him?

This is it, folks. The final chance for you to get your entry into WIND’s Best Conversation Ever Contest, the competition that gives you the opportunity to win a telephone chat with anyone in the world at all.

You have until Monday to submit your video or text entry letting us know who that dream conversation would be with and why. There are plenty of great entries already in (over 2,200 at last count), but that doesn’t mean you can’t swoop in with a late push and make the top 100, each of which advance to the final round. Currently, about 40 votes are needed to make it into the top 100, so if you put together a kick-ass entry and drum up enough interest in it this weekend, you can easily still have a chance to make it to the finals.

Once we’re down to the 100 finalists, the five judges (myself included) will each pick one of the winners and those five lucky Canadians (remember, this is a Canada-only competition) will each be awarded a conversation with the person they wanted to talk to.

After the contest ends on Monday, you should keep an eye on the @winwithWIND Twitter account for “inside” information regarding how the conversations are shaping up, so if you aren’t following this feed yet, you should get on that. There will be more giveaways of the $100 TicketMaster gift cards from this Twitter account, giving you even more incentive to follow it.

Finally, let’s take a look at some of the new sports celebrity entries that have caught my eye this week: Former Toronto Maple Leaf captain and one-time Vancouver Canuck Mats Sundin, Evgeni Malkin of the Pittsburgh Penguins (who currently has the time to have a conversation considering he’s done for the season with a knee injury), Adam Colton (who is apparently a professional longboarder) and former wrestler Bret Hart.

So that’s a wrap from this judge. Next time you hear from me regarding the contest, we’ll have some winners to announce!

By RotoRob
This entry was posted on Thursday, March 3rd, 2011 at 9:11 pm and is filed under Contests, RotoRob. You can follow any responses to this entry through the RSS 2.0 feed. You can leave a response, or trackback from your own site.