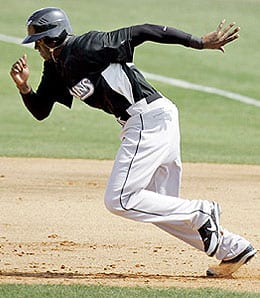 We’re still waiting for Cameron Maybin to arrive in The Show for good.

We continue our prospect roundup with Part II of the NL today. Previous parts: American League; National League Part I.

The Marlins roster is filled with prospects every year. The minute a guy turns 27 on this roster, they immediately get shipped out for another influx of prospects. It will be interesting to see if they can keep Hanley Ramirez in town to help sell seats for the new stadium. Cameron Maybin (No. 9 on our Top 40 Prospects List) was supposed to be the next big thing for the Marlins. He was the centrepiece of the Miguel Cabrera trade and considered the team’s centrefielder of the future when the year began. Not a lot has changed, as Maybin is still the centrefielder of the future in Miami, but the stats are not as gaudy as people once thought. He’s still just 22 years old, so the lack of power is forgivable. The big concern is the lack of speed. Maybin has just six stolen bases in 240 at bats in Triple-A.

Mike Stanton (No. 26) has taken over as the top prospect in Florida. At 6’5”, 240 pounds, Stanton is about as imposing as a player gets. He’s just 19 years old which means he might still have some room to grow. Some scouts believe that he has the most power potential in the entire minor leagues. Stanton will need some more time in the minors though, as he still strikes out once every three at bats. But that’s not a huge worry because at his age, he has plenty of time to develop. Stanton will not be useful to your Fantasy rosters this year, but he will soon erase any memories of other Mike Stantons you might remember.

If you’re looking for a player that might be able to help this year, Gaby Sanchez could be the answer. The Marlins have moved him from first base to third base to help make sure that he stays in the lineup. He is the complete opposite of current Marlins third baseman, Emilio Bonifacio, as Sanchez is a big guy with power potential. He will not steal bases like Bonifacio does, but he is more of a prototypical third baseman. The Marlins have threatened to replace Bonifacio numerous times this season and his .248 average is not exactly commanding a spot in the lineup.

Let’s not overlook first baseman Logan Morrison. While his counting stats are down this year because he missed several weeks with a broken wrist, he’s still been very impressive at Double-A, showing off a tremendous batting eye and scoring 40 runs in just 58 games. The injury probably cost him a chance at a September call-up, but Morrison could very easily be manning first for the Fish on Opening Day 2010.

I love the Astros. I was a big Killer B’s fan. Those days are long gone, though. Now the biggest killer ‘b’ is “barren,” as in the Astro farm system. There just is not a whole lot to talk about with the Astros. Bud Norris looked outstanding in Triple-A and has looked equally impressive in the majors since getting called up. Norris could stand to improve his control (10 walks in 16 innings in the bigs), but he has been tough to solve on a whole. He still does not seem to be a great pitcher long term, but as long as he is striking out a batter an inning, he has a place in NL-only Fantasy leagues.

Last year’s first round pick Jason Castro has looked very good just a year after being drafted. The problem with Castro’s statistics is that they are virtually impossible to analyze. For the first half of the season, he played his home games in Lancaster in the California league, which is notoriously more hitter happy than any other park in baseball. As a result, his home OPS in High-A was almost 275 points higher than his road OPS. Castro has tried to make the stats stand up as he’s hitting .304 since his promotion to Double-A, but is not drawing as many walks. He’s a patient hitter and most scouts say that the offense always comes later for catcher prospects. Considering the fact that Brad Ausmus is the standard for offensive catcher in Houston, Castro should be a breath of fresh air.

Though I think that the stats at Hi-A Lancaster are always inflations of talent, I’d feel remiss not to mention Jon Gaston’s season. In 420 at bats, he’s hit .288 with 25 doubles, 15 triples, 30 home runs, and 12 stolen bases. These stats are absolutely ridiculous and it will be very difficult to replicate when he is eventually promoted to Double-A. If Gaston does match these numbers, though, he will be one of the true big stars in baseball. Again, take the stats with a grain of salt as Lancaster is a hitter’s paradise.

Brian Bogusevic is one of the more interesting prospects in the system, as he spent his first couple of minor league seasons as a pitcher before switching to the outfield halfway through 2008. He pulled a Rick Ankiel, batting .371 in the Texas League, but that just 124 at bats worth of action. Promoted to Triple-A this season, Bogusevic has shown gap power, some patience and some speed, so he could get a chance to show his stuff this September, but he really doesn’t project as much more than a fourth outfielder in the majors.

James McDonald is one of the top pitching prospects in the Dodger organization. This year, the team has elected to use him as an integral part of its bullpen. For a while, there was a bit of talk about moving him to the rotation, but the Dodgers have decided it would be smarter to use scrap heap specials like Jason Schmidt. McDonald has little Fantasy relevance this season, but he is a guy to watch next spring when the Dodgers are filling out their rotation.

The top prospects for the Dodgers are all hanging out in the low minors. Inland Empire saw a great deal of time on ESPN due to the Manny Ramirez fiasco (how does a suspended player get a rehab assignment — that concept baffled me), but there are some nice bats down there to watch. Scott Van Slyke, son of former Pirate All-Star Andy Van Slyke, has hit .290 with 58 extra base hits, while Trayvon Robinson has been one of the most exciting players in the minors. Both hitters are still at least two years away, but should be highly regarded next spring when different rankings of prospects are published.

Outfielder Andrew Lambo enjoyed a nice season at Class-A last year, and then dazzled in a brief trial at Double-A. He hasn’t quite kept up the pace at Double-A this season, but he’s smoked 35 doubles and considering he just turned 21 this week, you’ve got to figure plenty of those will be leaving the park in time. Lambo could very well be the team’s top prospect, so let’s not ignore this kid.

Everyone loved Mat Gamel (The No. 32 prospect on our pre-season list) coming into the season. The Brewers were looking to improve their pitching at the trade deadline, but Gamel was untouchable in all of those negotiations. However, Casey McGehee stole all of Gamel’s at bats in Milwaukee, leaving Gamel to ride the pine for Ken Macha. When the Brewers acquired Felipe Lopez, they finally sent Gamel back to the minors to get some regular at bats. McGehee is not the long-term answer, so Gamel should be given an opportunity to play again next season. If the Brewers fall out of the race this year, Gamel should be back in September for some additional Major League experience.

The other untouchable prospect in the Brewers minor league system is shortstop Alcides Escobar (No. 27). In Triple-A, Escobar hit .298 with 42 stolen bases, and earlier this week — as part of a major shakeup in Milwaukee — Escobar was summoned to The Show while incumbent shortstop and former All-Star J.J. Hardy was demoted to the minors. Need speed? Grab this kid. He swiped a base in his first appearance as a pinch-runner and then had a hit and a run in his first start Thursday. Escobar has to be more productive than a guy like Craig Counsell. As a middle infielder with good wheels, the upside for Escobar offensively is similar to Luis Castillo in his early years with the Marlins.

Other than Escobar and Gamel, there is a shortage of Major League ready talent in the organization. Brett Lawrie and Caleb Gindl are nice hitters, but they will not be ready for a few years.

One arm worth tracking is Jeremy Jeffress, for no other reason than he can simply bring it. Armed with a triple-digit heater, this kid struck out 115 batters in 94 IP between High-A and Double-A last season. He started at Double-A this year, and again racked up the Ks (34 in 27 1/3 IP), but walked 33 as well, forcing Milwaukee to send him back to High-A. Jeffress took the demotion well, and although the walks were still too plentiful, he couldn’t be touched at this level (.145 BAA). Unfortunately, he’s been nailed with a drug suspension for 100 games. Still, he won’t be 22 until next month, and once he figures out how to command that 100 mph heat, he’ll move fast. Don’t sleep on him. Or offer him any more drugs.

Met fans would love to believe their team has a deep farm system. After all, they have to be optimistic if they are going to ignore how horrible the parent club has played this season. Granted, injuries have played a large role in their failures, but that makes the weak farm system even more of a problem. A strong farm system could have helped to successfully fill the holes created by injuries. Daniel Murphy was supposed to be a nice young bat that could step in and be the number two hitter for this team. He’s flashed his ability at times, but a .252 average and some defensive mishaps have left Met fans eagerly waiting for the next big talent.

Fernando Martinez (No. 29 on our prospect list) was the top Met prospect coming into the season and he had a shot to show his skills at the Major League level. However, after hitting .288 in Triple-A, Martinez was only able to manage a .176 average in 91 at bats. Like the rest of the Mets, Martinez has been hampered by the injury bug. The team seems to be getting healthy for September and there is actually still some hope for the postseason in New York. If things go the way the Mets plan, Martinez will not be a factor for the rest of this season, but you just never know with this team.

There is help coming in the lower levels, but it is just not ready for The Show. Wilmer Flores has received comparisons to a young Miguel Cabrera, but the statistics are not there to prove it yet. In terms of younger players that might be able to help your Fantasy team this year, Bobby Parnell is the guy to watch. The Mets have had a lot of issues with their rotation and Parnell might be able to fill the void. He will slowly need to be stretched out, but there is upside in his arm.

The team’s top pitching prospect, Jonathon Niese, pitched decently at Triple-A, but gave up a few too many hits for my liking. He got his shot in the majors and held his own, and then proved he truly belonged on the Mets by suffering a season-ending hamstring injury. He’s someone to watch next spring, as he’ll get a good chance to crack the rotation.

In Part III, we’ll wrap up the remainder of the NL team’s prospects.

By Matt Wilson
Tags: National League
This entry was posted on Saturday, August 15th, 2009 at 8:58 am and is filed under BASEBALL, Matt Wilson, Prospects. You can follow any responses to this entry through the RSS 2.0 feed. Both comments and pings are currently closed.