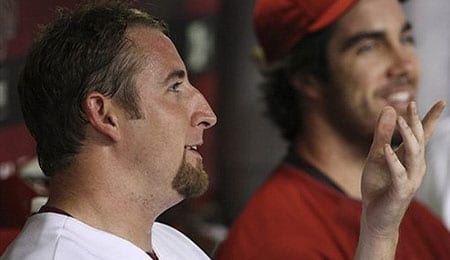 Will adding Brandon Webb (left) pay off for the Texas Rangers?

Does the baseball season ever really end? No, the end of one season is simply the start of the next and what a great way to start the New Year — spending a Sunday evening talking some baseball with Tony Cincotta, Rich Wilson, and yours truly on the FantasyPros 911 show on Blogtalkradio.

We got things rolling by taking a look at the Rangers’ recent acquisition, Brandon Webb. Was it a decent gamble by Texas and where should we be targeting Webb in our upcoming 2011 Fantasy drafts?

When it comes to closer jobs, many teams still have very unsettled situations. For instance, is J.J. Putz the answer in the desert? Will the amazing strikeout potential of Craig Kimbrel translate into a successful transition into the closer role for Atlanta? Can Mike Gonzalez stay healthy long enough to amass 20 saves in Baltimore? Does Evan Meek inherit the mound in the ninth inning for the Pirates? David Aardsma has gone under the knife to have his hip cleaned up. Will he make it back for the start of the season or is the end of the Mariners’ pen in the hands of Brandon League?

The ChiSox appear to be looking at either Matt Thornton or Chris Sale as the early contenders to replace Bobby Jenks, who has headed off to Boston. Has Rafael Soriano backed himself into a very costly corner? His options seem to be shrinking by the minute. Who should we target as potential handcuffs to protect our closer investments for 2011? There are so many questions to be answered with Spring Training voluntary reporting dates for pitchers and catchers less than six weeks away.

Heading into the early draft season, we have a logjam at the top of the draft board. Albert Pujols remains the consenus numero uno, but after the big man we’ve seen many differing approaches for picks two through five. Hanley Ramirez, Miguel Cabrera, Troy Tulowitzki and Carlos Gonzalez seem to be the popular choices being bandied about. Who would you chose if you were in this situation? Is Tulowitzki a solid choice as either the second or third pick in drafts with shortstop being such a veritable wasteland this year?

In 2010, many young pitchers amassed a very high number of innings pitched. We examined the Verducci effect and how it could come into play for Phil Hughes, Mat Latos, David Price, Trevor Cahill, and Clayton Kershaw for the upcoming season.

What up with Adam LaRoche? He had an apparent deal with the Orioles fall through and then the O’s moved on and signed Derrek Lee to a one-year-deal. We discussed the overabundance of free agents at first base several months back and if LaRoche doesn’t put pen to paper in Washington, he could soon potentially be the first casualty of this scenario.

A fun and entertaining time was definitely on the agenda and the full show can be heard by clicking the play button below.

By Tim McLeod
Tags: Podcast
This entry was posted on Tuesday, January 4th, 2011 at 10:39 am and is filed under BASEBALL, Podcast, Tim McLeod. You can follow any responses to this entry through the RSS 2.0 feed. Both comments and pings are currently closed.