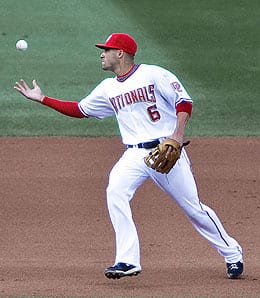 Ian Desmond needs to figure out how to get on base more often against righties.

By Herija Green and Tim McLeod

And the beat goes on for the 2011 RotoRob MLB Draft Kit as today we release another Fantasy cheat sheet. So while you wonder how the Atlanta Braves will fare in the post-Bobby Cox era, let’s take a look at the top Fantasy shortstops for 2011.

The shortstop position is dominated by two early first rounders — Hanley Ramirez and Troy Tulowitzki — and this is by far the thinnest category when looking for top-tier talent as the drop off into the middle tiers is rather abrupt and steep. Can Jose Reyes and his troubled hammies ever return to the 50 plus stolen base level? Has the bar now been set for Stephen Drew? Will Elvis Andrus take the next step up and can Ian Desmond build on his fine rookie campaigns? Has Derek Jeter finally come to the end of the road from a Fantasy perspective? All is not lost, though, as the end-game at this position provides some great opportunities to pad those speed numbers. Cliff Pennington, Erick Aybar, Ryan Theriot and Alcides Escobar all have the potential to steal 20 or more bases and make fine late round options this season.

1. Hanley Ramirez, Florida Marlins (1): Even in a down year, Ramirez still posted a .300-21-76 line with 32 stolen bases, which included a strong showing over the final two months. The 27-year-old is just entering his physical prime, and playing at a relatively thin position only enhances his value. There aren’t many legitimate five-category performers in Fantasy baseball, but Ramirez is one of them. He’s a top-five talent and should be selected accordingly.

2. Troy Tulowitzki, Colorado Rockies (2): A fractured wrist cost Tulowitzki much of June and July last year, but his post-injury performance showed no ill effects. He hit .323 with 18 homers and 61 RBI after the All-Star break, highlighted by an obscene 40 ribbies in September. The only real knock on Tulowitzki at this point is his durability as he has missed substantial chunks of time in two of the last three seasons. It’s hard to say if he warrants a first-round selection purely on production, but given the drop from him to Jose Reyes you’ll likely need to pull the trigger in Round One to secure his services.

3. Jose Reyes, New York Mets (5): Following his stellar 2006 campaign, it appeared that Reyes could be poised to challenge for multiple MVP awards. He’s never matched those numbers, though, and has struggled to stay healthy the past two years. The biggest issue is the absolute nosedive his stolen bases totals have taken — he averaged 64.5 from 2005-08 but managed just 30 in 40 attempts in 2010 — and when it’s your primary source of value there’s a major difference between 60 steals and even something closer to 40. He deserves to be the third shortstop taken, but he carries legitimate risk.

4. Alexei Ramirez, Chicago White Sox (10): While Ramirez’s peripheral numbers have ebbed and flowed since arriving in the majors, his work in the five traditional Fantasy categories has been amazingly consistent. The lanky shortstop hits for a respectable average, swipes a dozen or so bags and packs pretty decent punch for his size. His inability to augment his average with free passes keeps his runs lower than they could be, but right now he rates as one of the safer picks at the position.

5. Jimmy Rollins, Philadelphia Phillies (3): The 2007 NL MVP endured his worst season last year, suffering through a persistent calf injury and playing poorly even when he was in the lineup. It was the continuation of a disturbing trend for J-Roll, who has really struggled since his amazing MVP campaign. When healthy, Rollins still has plus wheels, and his place in one of the league’s best lineups affords him plenty of opportunities to pile up numbers. Even at 32, Rollins is perhaps the biggest risk/reward Fantasy shortstop.

6. Elvis Andrus, Texas Rangers (8): Andrus is a fantastic natural athlete with untapped potential as a hitter. As of now, however, the key word is “untapped.” The 22-year-old showed minimal growth at the plate during his sophomore season and has yet to show he’s anything more than a singles hitter. You can count on his speed, though, and if his other skills develop there’s some substantial upside. For now he remains a work in progress.

7. Derek Jeter, New York Yankees (4): The venerable Yankee shortstop struggled through the worst season of his 15-year career, hitting a paltry .270 with 10 home runs and 67 RBI. On the plus side, his spot atop New York’s potent lineup helped him rack up 100-plus runs for the 13th time in his career while his speed (18 steals) remained above average. It’s entirely possible the veteran has finally worn down, but his contentious contract negotiations should provide him with a little added incentive for one last big year.

8. Stephen Drew, Arizona Diamondbacks (7): Drew looked like a rising star in 2008 but instead has settled in to being more of a solid major leaguer. He’s a fine hitter with above-average pop, though that has never translated into impressive run or RBI totals — in fact, he’s never even reached the 70-RBI plateau. Drew is the kind of guy you can pencil in for a .275-15-65 line with a handful of steals. Not great, but good enough to be a Fantasy starter at a weak position.

9. Ian Desmond, Washington Nationals (39): As a rookie last year, Desmond posted decent totals in all five main Fantasy categories without excelling in any of them. The right-handed hitter was much more effective against southpaws, which on some clubs might be the start of a platoon role. However, there aren’t a lot of options in DC, and at 25 there’s still time for Desmond to grow.

10. Miguel Tejada, San Francisco Giants (16): The veteran’s mini renaissance in 2009 didn’t last long, as his average slipped from .313 down to .269 while his mid-teens power remained. The Giants should offer him more chances to drive in runs than Baltimore or San Diego did last year, but you have to consider anything more than a .280-15-75 line to be a pleasant surprise. Tejada is durable, though, which makes him someone steady that you can plug in and not worry about the bottom falling out. He is also listed in our 3B rankings

11. Rafael Furcal, Los Angeles Dodgers (12): Back injuries once again dogged Furcal in 2010. The veteran has now played in just 283 of a possible 486 games the past three years. When he’s healthy, he can still hit for a good average, and he proved last season that he can still run with the best of them (22 steals in 26 attempts). You cannot count on a full season out of Furcal, and yet he’s still a legitimate No. 1 option.

12. Alcides Escobar, Kansas City Royals (20): Heading into 2010, the Brewers thought so much of Escobar’s potential that they traded away incumbent shortstop J.J. Hardy. Then they watched Escobar chase every bad pitch under the sun, post a .288 on-base percentage and rarely display his base stealing acumen. All of which led to him being included in the Zack Greinke trade. Escobar is still very young, and manager Ned Yost figures to give him the green light more often than Ken Macha did so there’s potential for the second-year to rebound (he did hit .304 in 125 at-bats in 2009). Given how poorly he played in 2010, though, it’s a risk.

13. Starlin Castro, Chicago Cubs (NR): On the surface, Castro’s rookie numbers aren’t eye popping. However, when you factor in that he turned 20 years old last March it’s actually pretty amazing what he was able to accomplish. He doesn’t offer much power, though, and the fact that he was gunned down on eight of his 18 steal attempts is a bit disconcerting. If you’re into rolling the dice on upside in the later rounds you could do far worse than Castro.

14. Yunel Escobar, Toronto Blue Jays (9): Outgoing Braves manager Bobby Cox ran Escobar out of town last year, sending the talented shortstop to Toronto. He bounced back a bit, but he still wasn’t nearly as productive as he was in 2009 when he hit .299 with 14 home runs and 76 RBI. Escobar has plenty of bounce back potential in an underrated Blue Jays’ lineup and would make a nice late-round selection.

15. Asdrubal Cabrera, Cleveland Indians (13): A broken forearm cost Cabrera roughly two months, but even taking that into account his abbreviated 2010 performance in no way built on what was a strong showing in 2009. Cabrera has gap power and can steal a base, and while at most positions that wouldn’t be enough to warrant consideration, at shortstop, you can leave no stone unturned, and that might mean turning to him.

16. Juan Uribe, Los Angeles Dodgers (24): For Uribe’s profile, see our 2B rankings. He is also listed in our 3B rankings.

17. Alex Gonzalez, Atlanta Braves (30): Gonzalez matched his career high with 23 home runs last year, and outside of Ramirez and Tulowitzki (and possibly Uribe) he’s the most legitimate power threat currently playing shortstop. His .248 lifetime average is no aberration, and this — combined with a lack of speed — makes him someone that arguably takes as much off the table as he puts on.

18. Jhonny Peralta, Detroit Tigers (15): Even though Peralta didn’t bounce back to his pre-2009 levels last year, his production numbers after moving to the Motor City should be seen as an encouraging sign. In fact, if Peralta were to match his HR/RBI pace with the Tigers over a full season he’d eclipse 20 bombs and 100 ribbies. That’s unlikely, but something in the neighborhood of 18 dingers and 85 RBI is a possibility. Peralta is also listed in our 3B rankings.

19. Cliff Pennington, Oakland Athletics (25): Only three shortstops stole more bases last year than Pennington’s 29, which gave the switch hitter sneaky value. A sore shoulder did him no favours as he hit just .232 after the break, and he should be improve on that this year. Still, Pennington’s Fantasy value lives and dies with his work on the base paths. If you’re hurting in that area consider taking a late-round flier on him.

21. Erick Aybar, Los Angeles Angels (11): The diminutive Aybar has about as much pop as you’d expect out of a 170-pounder. He is little more than a singles hitter with good speed, meaning he’s a last gasp selection.

23. Jason Bartlett, San Diego Padres (6): It’s not surprising that Bartlett slipped in 2010 after a shockingly productive 2009 campaign (.320-14-66 with 30 steals), but his precipitous decline in stolen bases is a real concern. Moving to spacious PETCO Park isn’t likely to help his numbers, either, particularly with Adrian Gonzalez no longer around to drive in runs.

24. Marco Scutaro, Boston Red Sox (18): Scutaro played well during his first season in Beantown, but the presence of Jed Lowrie, who looked good late in 2010, makes it unclear just how much the BoSox will turn to Scutaro this season.

25. Tsuyoshi Nishioka, Minnesota Twins (NR): While it remains to be seen how Ron Gardenhire will deploy Nishioka and Alexi Casilla, that twosome should be Minnesota’s starting middle infield this season. Nishioka hit .346 for Chiba Lotte in Japan last year, but his career .293 mark is likely a more accurate gauge of what we can expect. The 26-year-old possesses limited power and decent speed. A string of injuries have contributed to a decline in steals (41 in ’05; down to 22 in ’10) and create some durability concerns for the AL-only option. Nishioka is also listed in our 2B rankings.

Catchers
First Base
Second Base

Third Base
Shortstop
Second Base
First Base
Prospects

By Herija Green
Tags: Atlanta Braves, MLB Draft Kit
This entry was posted on Wednesday, March 2nd, 2011 at 4:14 pm and is filed under 2011 RotoRob MLB Draft Kit, BASEBALL, Cheat sheets, Herija Green, Tim McLeod. You can follow any responses to this entry through the RSS 2.0 feed. Both comments and pings are currently closed.