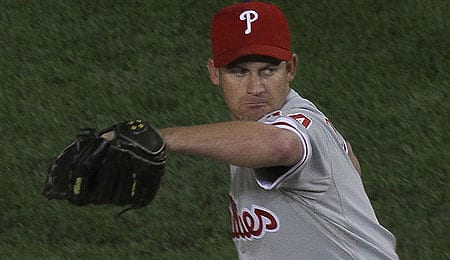 Although Philly didn’t get back to the Series, its addition of Roy Oswalt paid dividends.

I’d like to take this opportunity to wish all our readers a very happy and hopefully successful 2011. May all your Fantasy endeavours be fruitful (mmm….fruitful fantasies…).

With 2010 pretty much in the books, I’d like to look back at a few highlights from the baseball season while also taking a peek ahead to next season.

And Yet They Didn’t Win Anything

Okay, this makes sense. The Rockies were able to get unbelievable breakthrough performances from their trio of young core players – Ubaldo Jimenez, Carlos Gonzalez and Troy Tulowitzki – yet they dropped nine games from their 2009 record and were unable to return to the playoffs, something we thought was very possible in mid-September.

Injuries definitely played a role here, but a 31-50 mark away from home was probably the real reason Colorado couldn’t punch itself another post-season ticket. You’ve got to be able to win on the road, people.

A Staff of Aces

Over in the NL East, the Phillies led the Wild Card by just two games in early-September, but trailed the division to Atlanta by two games. However, with an amazing pitching staff led by Roy Halladay and bolstered by trade deadline acquisition Roy Oswalt, we were ready to declare them playoff bound. Not only did they chase the Braves down and win the NL East by

However, with the addition this offseason of Cliff Lee, the Phils will boast a front four of Halladay, Lee, Cole Hamels and Oswalt that is unparalleled in baseball. Anyone want to bet against this team getting back to the World Series in 2011?

By the way, how incredible was Halladay in his first taste of the playoffs? His no-hitter in Game One of the NLDS against the Reds was one of the most incredible pitching performances I’ve ever seen.

When the D-Backs dealt a struggling Edwin Jackson to the White Sox for Daniel Hudson and David Holmberg, it looked like a fine deal for a the future for them, as they parlayed the enigmatic Jackson into a pair of young pitching prospects. While Jackson really turned his season around, giving the Pale Hose more than they bargained for, it wasn’t enough to get them to playoffs. Hudson, meanwhile, turned into an instant ace. Clearly, he’s nowhere near as good as he showed down the stretch in Arizona, but he’s also clearly better than anyone gave him credit for and he was one of the better waiver wire pickups in the NL as a result. And Holmberg, the Sox’s second round pick in 2009, also has potential. This move helped take some of the sting out of a very ugly year in the desert.

Over in the American League, the Tampa Bay Rays got back to the postseason after a down season in 2009, and you can definitely thank its rock solid rotation for that. Matt Garza continues to dumbfound us, however. He’s clearly among the more talented pitchers in the game, but his lack of consistency is maddening. He was simply incredible in April, going 4-1, 2.06, before putting up a so-so- May (1-3, 3.95), an ugly June (4-1 despite a 6.83 ERA) and a middling July (2-0, 4.22 and the first no-hitter in franchise history). Garza was then lights out in August (2-2, 1.27) before struggling badly down the stretch, going 2-3, 5.88 in September.

So which is the real Garza? Overall, there are plenty of things to like about his 2010 season, which included a career high in innings pitched and wins. He also slightly improved his WHIP and ERA despite the massive fluctuations in performance. But Garza’s strikeout rate fell off the ledge (6.6 K/9 after a career best 8.38 in 2009) and he was more hittable than at any time since arriving in Tampa in 2008, albeit not so horribly that I’d be worried about it. Garza is 27 and seemingly on the cusp of greatness, but until he maintains a level of consistency, we’re only going to witness flashes of it.

Back at the end of the season, we debated the Cy Young chances of Mariner ace Felix Hernandez, an award he took home by a much larger margin than anyone could have expected. Did he deserve it? I sure as hell think so. He racked up a career high 232 strikeouts – missing the major league crown by just one whiff to the Angels’ Jered Weaver (there’s a bit of a surprise), had a career low in ERA and his best command yet. But the most mind-boggling thing for me about King Felix’s season? The 17 straight quality starts that he tossed after the All-Star break. Just roll that around in your head for a moment.

Finally, we haven’t really had an opportunity (or a desire, after they beat our Braves and Phillies) to congratulate the San Francisco Giants on winning their first World Series since moving west over 50 years ago, but this is as good a time as any to tip our hats to them. The pitching staff was simply phenomenal with Tim Lincecum, Matt Cain and Jonathan Sanchez, while the team – like most winners tend to – got a massive boost from an unexpected source as Edgar Renteria hit .412 with two homers, six runs and six RBI in the series to take home MVP honours. Seriously? Edgar Renteria? Like I said, those are the kind of out of the blue performances that win championships.

By RotoRob
This entry was posted on Friday, December 31st, 2010 at 3:47 pm and is filed under BASEBALL, RotoRob. You can follow any responses to this entry through the RSS 2.0 feed. You can leave a response, or trackback from your own site.