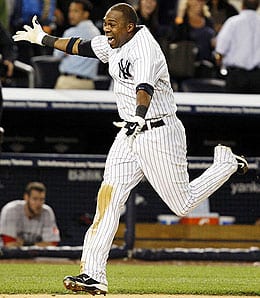 Marcus Thames is stoked that the Yanks are back atop our Power Rankings.

The New York Yankees have continued to fight after being behind the Rays for the last two weeks and have finally prevailed to grab hold of the number one spot in the majors again. This week we also finally witnessed the debut of flamethrower Aroldis Chapman and, to say the least, I am very intrigued to see how his career develops.

Biggest Jump: The Washington Nationals jumped two spots from 25th to 23rd despite the loss of Stephen Strasburg to Tommy John surgery.

1. (2) New York Yankees, 83-50: The Yankees are currently on a five-game win streak, outscoring their opponents 38-21 in that span. A big thanks must go to Marcus Thames, who went on a 9-for-21 tear with seven homers and 11 RBI in six games at the end of August. It looks to me like this team is driven to repeat.

3. (4) Atlanta Braves, 78-55: With the Phillies right on their tail, the Braves managed to increase their lead to three games after winning five straight. On Thursday, the Braves send out Tim Hudson, who is totally rolling now, as they aim to wrap up a sweep over the Mets. Atlanta is now tied with the Reds for the best record in the NL.

4. (5) Cincinnati Reds, 78-55: This has to be one of the happiest teams in the bigs this season. Little did anyone know the Reds would have an eight-game lead over the Cardinals in the NL Central heading into the last full month of the season. For Cincinnati, it was a perfect time Tuesday to bring in prodigy pitcher Chapman for his MLB debut. He sure showed Reds’ fans he can bring it, reaching over 100 mph on six of his seven fastballs. Chapman followed that up by earning his first career on Wednesday against the Brewers, striking out a pair in a perfect inning in the top of the seventh before his team gave him six runs in the bottom of the frame to bag him the W.

5. (3) San Diego Padres, 76-56: The Padres still have a three-game lead over the Giants, but if they want to win the NL West and make the playoffs, they better snap out of this current funk pronto. As mentioned in the intro, the Pads have dropped seven straight after being swept by both the Phillies and the lowly Diamondbacks. San Diego’s next four series are against division rivals: the Rockies, the Dodgers, the Giants, and then the Rockies again; if this team continues playing like this, its playoff hopes will fade quickly. Chase Headley has played well the last couple of months, but the Padres need a couple of other hitters to step up.

6. (6) Minnesota Twins, 77-56: After fending off a sweep in Texas last Thursday, the Twins were able to turn things around with five wins in their last six games. However, over Minny’s last eight games, whether won or lost, it’s been nail biting time, with every game decided by three runs or less. Despite the loss of starter Kevin Slowey a couple of weeks ago, this team continues to win on pure will. Of course, having the best team batting average in the majors (.279) doesn’t hurt, either.

7. (7) Texas Rangers, 75-58: Even though the Rangers have lost four of their last seven games, getting Ian Kinsler and Nelson Cruz back from the DL should help them prepare for the playoffs, a place they sure like they’re headed given a 9.5-game lead over the Athletics.

8. (8) Boston Red Sox, 75-58: After losing four of six, including two close calls in Tampa Bay, the Red Sox now find themselves seven games behind the Rays in the Wild Card race, and only two ahead of the White Sox. And with Dustin Pedroia landing back on the DL for the rest of the season, they will need a late push to stay in the playoff race.

9. (10) Philadelphia Phillies, 75-58: The Phillies’ offense has been lacking a little lately, only scoring over six runs once since August 18, but their pitching has been great only allowing more than two runs twice since August 19. I would bet that Philadelphia’s pitching with Roy Halladay, recently-acquired Roy Oswalt, Cole Hamels, Brad Lidge, and even Joe Blanton, who has looked very sharp lately, will throw this team into the playoffs.

10. (9) San Francisco Giants, 74-60: With Freddy Sanchez turning over a new leaf after slumping for awhile, Tim Lincecum pulled off his 12th win of the season on Wednesday, tossing eight innings with nine strikeouts and only one earned run allowed. It was a huge win for San Francisco, as it not only pulled within three games of the Pads, but a 2-1 pitching duel win over Ubaldo Jimenez had to be a nice shot in the arm.

11. (12) Chicago White Sox, 73-60: Despite scoring the most runs in the AL in August, the White Sox lost their slim division lead and have now fallen four games behind the Twins. At the deadline, the Sox failed to address their biggest need (bullpen help), but trading for Manny Ramirez could help them push for the playoffs, assuming he doesn’t get hit by a pitch in the back every game.

12. (11) St. Louis Cardinals, 69-62: I definitely thought this team would put up more of a fight against the Reds in the NL Central, but now they are even beginning to fall out of the NL Wild Card race. The Cardinals have lost eight of their last nine games; Albert Pujols and Chris Carpenter are like two fuming stars right about now.

13. (13) Colorado Rockies, 69-63: The Rockies are barely hanging in the NL Wild Card Race, 5.5 games back, and they were starting to win until running into the Giants and the return of 2008-09 circa Lincecum. But don’t give up on this team yet; with Jimenez at the helm, Colorado has plenty of time to make the playoffs.

14. (14) Toronto Blue Jays, 69-64: If the Jays weren’t in the best division in baseball, they’d have a much better chance of making the playoffs, But Toronto still fight ons with Jose Bautista now up to an MLB-leading 43 homers.

15. (15) Los Angeles Dodgers, 68-66: This team is some trouble after losing four of their last five games; hell, over the weekend, even Chad Billingsley allowed his first home run since May.

16. (16) Florida Marlins, 67-65: Talk about a streaky team. The Marlins seems to win four to five in a row and then turn around and lose the same amount. Leo Nunez is having a solid season, but his eight blown saves aren’t helping this team achieve consistency, unless you count consistently inconsistent.

17. (17) Oakland Athletics, 65-67: During their ten-game road trip, the A’s have gone 4-5 so far, but face being swept by the Yankees Thursday before heading home to face the Angels, Mariners, and Red Sox. Despite a less-than-inspiring road trip, look for Trevor Cahill to earn his 15th win Saturday against the Angels and Jered Weaver, in what should be a sweet pitcher’s duel.

18. (19) New York Mets, 65-68: You never know if this team will make the playoffs after playing well the first half and falling apart the second half. It’s like déjà vu year after year in recent seasons. Things don’t get any easier Thursday, as the Mets must face arch-nemesis Tim Hudson, who has beaten New York four straight times.

19. (18) Los Angeles Angels, 65-69: One of the biggest disappointments of the year, the Angels are now 11 games behind the Rangers and in third place in the AL West. Maybe next year they will have a better chance with Dan Haren and Jered Weaver pitching back-to-back.

20. (20) Detroit Tigers, 65-68: A 2-4 start to a ten-game road trip does not bode well for the Tigers. Two of the losses were in extra innings and the other two were by just one run each, but that’s cold comfort considering this team is now 22-43 on the road, and only four of their last nine series this season are at home. Thursday, they’ll try to avoid a sweep in Minnesota against the Twins, a team that — believe it not — they were actually ahead of just over five weeks ago.

21. (21) Milwaukee Brewers, 62-71: Milwaukee’s last three series have been sweeps, but unfortunately, the Brewers were on the losing end in two of them (to LA and Cincy). The third series was a sweep over the worst team in the majors, the Pirates, but it took extra innings for the Brew Crew to pull out a very tight second game in that series. Unless Milwaukee finishes with a serious flourish, smart money’s on manager Ken Macha getting the axe at season’s end.

22. (22) Houston Astros, 62-71: If only the Astros had played like this all season and had kept Roy Oswalt, they could have a better chance of making a bit of noise in the playoff race. Houston has won nine of its last 11 games and now travels to Arizona and then Chicago, two more winnable series, even if both the D-Backs and Cubs have shown some life lately.

23. (25) Washington Nationals, 57-77: With Strasburg needing TJS, Washington will lose its prized rookie next season and perhaps for part of 2012 as well. Let’s hope he can come back and be the great pitcher everyone expects he can be.

25. (23) Kansas City Royals, 56-77: Joakim Soria picked up his 29th consecutive successful save dating back to May 11, but my question is, will defending AL Cy Young winner and teammate Zack Greinke get two more wins to reach double digits before season’s end?

26. (26) Cleveland Indians, 53-80: Cleveland is another team on the fall this week, having lost its last four games. This most recent skid clouds an otherwise bright spot which has been the play of Michael Brantley, who hit .309 with an OPS of 816 in August.

27. (28) Arizona Diamondbacks, 55-79: Despite being in last place in the NL West, 22 games back, the Diamondbacks have won six of their last seven games including a sweep of the Padres at home. Also, Barry Enright won his third straight start Wednesday giving him a 6-2 record since being promoted to the team on June 30.

28. (27) Seattle Mariners, 52-81: The Mariners have scored more than six runs only twice since the All-Star break. Now they get a crack at home against the Indians. Good news, right? Maybe not; Cleveland has won five straight games at Safeco.

29. (29) Baltimore Orioles, 49-84: The sweep of the Angels over the weekend helped the O’s close out August with a 17-11 mark for their first winning month since June 2008. Thursday, B-More looks to continue playing the spoiler by taking the rubber match in its series against a desperate Boston squad.

30. (30) Pittsburgh Pirates, 44-89: The Pirates went 8-21 in August and started September with another loss on Wednesday. At least rookie Jose Tabata continues to improve, batting .339 in August and gaining tons of Fantasy traction in recent weeks. This kid is poised to be a serious force in 2011, lending hope that Pittsburgh may finally have a shot at ending its losing ways.

By Trevor Blake
Tags: Marcus Thames
This entry was posted on Thursday, September 2nd, 2010 at 3:56 pm and is filed under BASEBALL, MLB Power Rankings, Trevor Blake. You can follow any responses to this entry through the RSS 2.0 feed. Both comments and pings are currently closed.