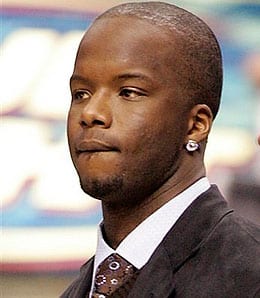 Now that Jermaine O’Neal is out of street clothes, you better grab him while he’s still healthy.

Welcome to the Week 11 edition of the Wire Troll, our weekly look at players that may be available on your league waiver wire, but could see a spike in Fantasy value due to a variety of circumstances.

Like most of the rest of you, The Troll is recovering from his New Year’s Eve over-indulgence, so there won’t be much in the way of snappy repartee in this week’s introduction. Suffice it to say that a few major injuries have opened playing time for some heretofore forgotten players, and some of these new faces could be solid short-term Fantasy additions. As always, stay vigilant of these new situations, as the players involved could earn more playing time in the future if they perform well in their stand-in roles.

I’m also planning to join you all in watching college football – though I’ll only glance at the undercard until the Only Game That Really Matters is played next Monday. Great system this BCS thing, huh? Have you guys/computers ever considered taking the top four teams – as determined by your Precious Microchips – and matching them up (1 vs. 4, 2 vs. 3) in, say, the (insert corporate sponsor here) Rose Bowl and (insert corporate sponsor here) Sugar Bowl this year, then alternating the major bowls as “semi-final” matchups in each succeeding year? You add only one more game to the schedule, and three bowl games actually mean something instead of only one. I think NCAA football and synchronized swimming are the only sports without a playoff system, and I can say that this is one sports fan that’s college football fan-dom has gone right down the tubes since the idiotic BCS system came into force.

And, lastly, in the name of being proactive, let me say that any photos that emerge of The Troll in, shall we say, embarrassing or compromising positions/situations brought about by last night’s frivolity are absolute fakes. The exception would be any pictures that depict me in the company of various female pseudo-celebrities or certain members of the LPGA tour. Those are absolutely legitimate…really, they are.

Let’s have at it, then…and let’s do it quietly, please. For updates during the week, don’t forget to follow the Troll on Twitter.

Chris Andersen, Denver Nuggets: Nene is hobbling with a gimpy hammy, so enter The Birdman. Andersen scored 11 points, yanked down seven boards and swatted two shots in the Nugs’ Nene-free tilt on Wednesday, and should be a threat for a double-double and at least two blocks while he’s earning 25-plus minutes of floor time. The Troll does not need to expand on Nene’s injury history — though in fairness, he’s been rather durable over the past two seasons. Know, however, that hamstring injuries can linger, and the Nuggets may strive to limit Nene’s minutes in the short run so that the problem does not worsen. Andersen is worth adding if you need boards and blocks, but he’s only suited to standard leagues while Nene is on the shelf.

Jermaine O’Neal, Boston Celtics: JO timed his return to action well, as Kevin Garnett is probably out until mid-January. Glen Davis will see the lion’s share of Garnett’s minutes, but O’Neal should see an expanded role as well. Big Baby is the No. 1 add here, but if he’s not available, J.O. can provide some decent support in deeper leagues. O’Neal posted eight points, pulled down six boards and blocked three shots in 33 minutes on New Year’s Eve, and that’s emblematic of what we can expect from the veteran while the Big Ticket is out.

Ryan Anderson, Orlando Magic: The recent trades that brought Gilbert Arenas and Hedo Turkoglu to Orlando have opened up minutes for Anderson, and the big man has responded by averaging ten points, six boards, 1.8 threes and 1.4 steals in his first five games. Fantasy owners in deeper formats should consider adding Anderson, as he provides a rare combination of rebounds and treys. Keep an eye on his minutes, though, and be prepared to cut bait if he falls out of the Orlando rotation.

Linas Kleiza, Toronto Raptors: With starter Sonny Weems on the shelf, Kleiza has stepped up in a big way, posting the kind of numbers many thought he’d put up right from the get-go when he arrived in Toronto. In the six games since Weems went down, Kleiza has averaged 19.7 points, 7.3 rebounds and 2.2 treys – and looks to have cemented a place in the starting lineup even after Weems makes it back. Watch out for his high turnover rate, but Kleiza is worth considering in most formats while he’s on this kind of roll.

DeMar DeRozan, Toronto Raptors:  His 37-point explosion on New Year’s Eve was the culmination of what was a very nice month for DeRozan. The second-year man averaged 15.9 points, 3.3 rebounds, 1.7 assists and 0.9 steals – while shooting over 48 per cent from the field. Don’t look for huge peripheral stats here, but while DeRozan is playing this large of a role in the Toronto attack, he deserves some Fantasy consideration in deeper formats.

Mickael Pietrus, Phoenix Suns: Perhaps no player has benefited more from the aforementioned Orlando/Phoenix mega-trade than Pietrus, who has averaged 17 points and 3.3 treys in his last three games with his new team. He earned his first start of the season Friday, and could be in line for 25-plus minutes per night going forward. Pietrus is a catch-and-shoot kind of player, so don’t look for big peripheral numbers – but if you’re lacking for points and treys he can certainly fill your need.

By Buck Davidson
This entry was posted on Saturday, January 1st, 2011 at 4:42 pm and is filed under BASKETBALL, Buck Davidson, The Wire Troll. You can follow any responses to this entry through the RSS 2.0 feed. You can skip to the end and leave a response. Pinging is currently not allowed.