The Wire Troll: The 2010 Pitching All-Stars 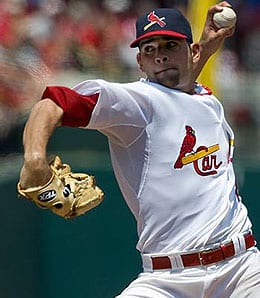 If you snagged Jaime Garcia off the wire, you enjoyed a serious return.

After last week’s review of the bats it’s time to move forward and take a look at some of the pitchers that were waiver wire gems in 2010. What an amazing year it was for starting pitching. The waiver wire options were plentiful and a Fantasy rotation made up of these gems would have been league dominant in any format this season. Without further ado, let’s take a look at top pitchers that were plucked from the wire this season.

Trevor Cahill, Oakland Athletics: Cahill struggled with a sore left shoulder blade in April and got hammered by the Jays on April 30 in his first start coming after being activated off the DL. After this rough initiation to the 2010 campaign, he stepped it up and immediately made his presence felt. In 196 2/3 IP, he allowed 155 hits with 63 walks and struck out 118 batters on his way 18 wins with a stellar 2.97 ERA and 1.11 WHIP. The 22-year-old “ace” is my waiver wire pitcher of the year for his outstanding efforts.

Jaime Garcia, St. Louis Cardinals: After Garcia had lost a season because of Tommy John surgery, no one expected much from the 24-year-old southpaw in 2010. However, not only did he win the fifth starter job out of Spring Training, Garcia was nothing short of phenomenal in his rookie campaign. He won 13 games and in 163 1/3 IP, posted a 2.70 ERA, 1.32 WHIP and 132 strikeouts. These outstanding numbers make Garcia a front-runner to pick up some off-season hardware as the NL Rookie of the Year.

Colby Lewis, Texas Rangers: How could I not include the one guy I’ve been touting since he announced his return to MLB? Lewis was signed as a free agent by Texas after two stellar seasons in Japan and, other than a lack of offensive support after the All-Star break, was a huge bargain to those that gambled on him early on off the wire. Lewis finished up with a 3.72 ERA, 1.19 WHIP and 196 strikeouts with 12 wins in his first season in Texas and was an integral part in the Rangers reaching the postseason for the first time this millenium.

Max Scherzer, Detroit Tigers: Scherzer was sent down to Triple-A after struggling horribly at the end of April, returning with a vengeance after some mechanical adjustments. He struck out 14 Athletics in his return on May 30 and never looked back. He finished up the year 12 wins and, in 195 2/3 IP, allowed 174 hits and 70 walks while striking out 184. Scherzer and Justin Verlander should be a great one-two punch for the Tigers heading into 2011.

Jhoulys Chacin, Colorado Rockies: Chacin was called up to replace the injured Jorge De La Rosa at the beginning of May and immediately made his presence felt. The 22-year-old posted a 3.28 ERA and 1.27 WHIP to go along with 138 strikeouts in 137 1/3 IP. In a year headlined by so many great young pitchers coming into the game, Chacin has to be considered one of the best.

Brett Myers, Houston Astros: Myers was an off-season free agent signing by the Astros and bounced back from a disappointing injury-filled 2009 to post career numbers this year. He won 14 games and, in 223 2/3 IP, posted a career best 3.14 ERA with 180 strikeouts. Those that gambled early on with Myers were handsomely rewarded.

Carlos Zambrano, Chicago Cubs: Zambrano was banished to the bullpen then banished from the team and yet upon his return to the starting rotation after spending some time dealing with his anger issues he finished off the year surprisingly strong. In six starts down the stretch, he won five games, and allowed only five earned runs with 38 strikeouts in 41 IP. Now, do we see the good or evil Big Z in 2011?

Brandon Morrow, Toronto Blue Jays: It was a year of highs and lows for the former Mariner, but when Morrow was rolling there was no denying he was spectacular. In 146 1/3 IP, he amassed an incredible 178 strikeouts — including 17 in his one-hit performance against Tampa Bay in mid-August. Given his massive increase in innings, the Jays were being very careful with their young star-in-the-making and wisely shut the young flamethrower down at the beginning of September.

R. A. Dickey, New York Mets: I kept waiting for the 35-year-old knuckler to come unglued and he simply didn’t. Dickey came out of nowhere (although kudos to RotoRob for identifying him as someone to watch at the beginning of May) to post a career year in 2010 with 11 wins and a stellar 2.84 ERA and 1.19 WHIP. It was a truly great year for the journeyman, but the fact that entering the 2011 campaign he is possibly New York’s ace doesn’t bode well for Met fans.

Daniel Hudson, Arizona Diamondbacks: The White Sox recalled Hudson in July and he struggled in three starts before being traded to the D-Backs at the deadline for Edwin Jackson. The 23-year-old Hudson then proceeded to pitch at least six innings in each of his next 11 starts, winning seven games and allowing only 51 hits with 16 walks while striking out 70 in 79 2/3 IP. Not that Jackson pitched poorly for the ChiSox, but this is one trade that GM Kenny Williams might be regretting down the road (assuming he still has a job).

Chris Perez, Cleveland Indians: The promise that Perez showed while filling in during Kerry Wood’s two stints on the DL was brought to fruition when Wood was eventually dealt to the Yankees at the trade deadline. In 63 IP, Perez struck out 60 and with 23 saves has a firm hold on the closer job and the potential to be a Top Ten closer in 2011.

Juan Gutierrez, Arizona Diamondbacks: The Arizona pen fumbled and stumbled along suffering through a case of gopheritis the likes of which we’ve seldom seen, until mid-August when Gutierrez returned from the DL. Commencing September 14, he posted seven saves in seven consecutive appearances making him the early favourite to close for Arizona heading into 2011.

Koji Uehara, Baltimore Orioles: In the second half of 2010, Uehara found both some semblance of health and his niche. Since arriving on the scene in Baltimore following a stellar career with the Yomiuri Giants, Uehara has been a rather large disappointment. Down the stretch, he moved into the closer role and managed 13 saves with 55 strikeouts in 44 IP. It will be very interesting to see where Uehara lands as he enters free agency this offseason.

John Axford, Milwaukee Brewers: Axford was one of the few bright spots in a dismal year in Milwaukee. After Trevor Hoffman struggled, Axford moved into the closer role and posted eight wins, 24 saves and an amazing 76 strikeouts in 58 IP. Axford should move into 2011 with the closer gig locked up and should provide a very solid return as a mid-tier closer.

Kevin Gregg, Toronto Blue Jays: The big debate entering Spring Training in Toronto was who was going to save games for Jays. Jason Frasor, Scott Downs, and Gregg were all in competition for the job with Frasor breaking camp with the gig. Six months later, Gregg has amassed 37 saves and was a huge early waiver acquisition that paid off in spades.

Hong-Chih Kuo, Los Angeles Dodgers: The implosion of Jonathan Broxton in the second half thrust Kuo into the closer role and he didn’t disappoint. In 59 IP, he allowed a scant 29 hits with 72 strikeouts and 11 saves. Add the bullpen to the list of concerns that new Dodger manager Don Mattingly will have to address heading into the 2011 campaign.

Joel Hanrahan, Pittsburgh Pirates: Enjoyed a career year.
Evan Meek, Pittsburgh Pirates: Had an All-Star campaign and looks ready to be a closer.
Aroldis Chapman, Cincinnati Reds: Chapman sure generated plenty of hype with his heater.
Alfredo Simon, Baltimore Orioles: Had the closer job for a while before faltering.
Hisanori Takahashi, New York Mets: Can you believe the Mets signed this guy with a minor league deal?

By Tim McLeod
This entry was posted on Monday, October 4th, 2010 at 3:22 pm and is filed under BASEBALL, The Wire Troll, Tim McLeod. You can follow any responses to this entry through the RSS 2.0 feed. You can skip to the end and leave a response. Pinging is currently not allowed.