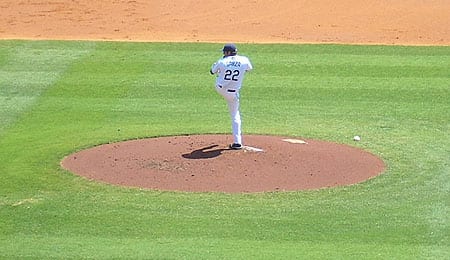 Matt Garza has been phenomenal for the Rays so far this season.

Do you trade for potential or stand pat?

Let’s first take a look at the two starting pitchers. Lester was off to a slow start, but historically April hasn’t been overly kind to him. In his last two starts, we’ve seen the Lester that we’ve come to know and love and, looking forward, he should continue to post great numbers. Garza was off to an amazing start up until facing the Jays in his last outing where he struggled. I like both pitchers and own both in numerous leagues. I’m going to give Lester the edge here, but just a very slight one based on the fact that he has done it before, coming off that great 2009 campaign.

They both pitch for solid teams and should end up in the 200 strikeout range with peripherals that are very comparable.

Moving on to the two bats I think it becomes a bit clearer. Upton is struggling right now and, although I believe he’s an incredible talent, he simply is not as “safe” an option as Werth. Batting in the Philly lineup, Werth will give you great power, score a ton of runs and has swiped 20 bags in each of the past two seasons. The edge has to go to Werth.

My advice would be to sit with Garza and Werth. You have a ton of depth in your current rotation so the marginal upgrade in Lester simply doesn’t warrant the gamble on Upton. It is very early in the season and I just don’t see any reason to make a move at this time. Let the numbers fall where they may for the next month or so and by then you’ll have a clearer indication of your team needs and then moving one of your big guns for specific needs could prove to be a more prudent course of action.

By Tim McLeod
This entry was posted on Wednesday, May 5th, 2010 at 1:11 pm and is filed under BASEBALL, Dear RotoRob, Tim McLeod. You can follow any responses to this entry through the RSS 2.0 feed. You can skip to the end and leave a response. Pinging is currently not allowed.