Podcast: Handing out the Hardware 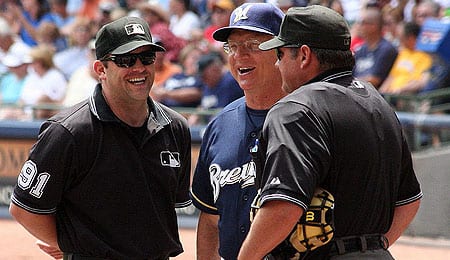 Perhaps if Ken Macha spent less time cajoling with umpires and more time worrying about his team, the Brewers might be within shouting distance of the playoffs.

This week’s Podcast had Tony Cincotta, Rich Wilson and myself take our annual trek to the awards banquet as we attempted to sort through the many very deserving candidates for our own post-season awards on the FantasyPros 911 show on Blogtalkradio.

We got the ball rolling with the The Olsen Sisters Award, given to the player that peaked too early and never quite delivered the goods in their adult life. The candidates were Brandon Wood, Scott Sizemore and Jonathan Broxton. And the winner is…

Rich’s affinity for Hogan’s Heroes made the Colonel Klink Award for bumbling Manager of the Year a sure-fire hit and with three very deserving candidates in Ken Macha, Tony LaRussa and Jim Leyland, the debate was an interesting one.

The Jimmy Johnson ExtenZe Award, given to the player lacking a little in performance, had four very worthy candidates in John Lackey, Javier Vazquez, Pablo Sandoval, and Scott Kazmir. It was determined that R.A. Dickey should definitely be signed on as spokesman for this product. Don’t dick around here, R.A. – get your agent working on this one right smartly.

We also took a few minutes to look at some of the serious awards and attempted to resolve the rather muddled AL Cy Young picture. Is Felix Hernandez worthy of consideration with only 13 wins so far or does Jon Lester or C.C. Sabathia with those high win totals rule the roost?

In the AL MVP race, are Jose Bautista and his mind-boggling power numbers not getting the love that they should? Over in the NL, the trifecta of Albert Pujols, Carlos Gonzalez, and Joey Votto are the front runners. All three are enjoying outstanding seasons and the final outcome is going to be a very close one in this race.

The greatest Tip of the Year delivered on the show had four finalists in Tony for his prediction that Bautista was not only draftable but would deliver the goods this year, Lenny Melnick for picking the Cincinnat Reds to win it all, yours truly for constantly mentioning that Colby Lewis was a Fantasy God and, finally, Rich for his advice that you don’t want to miss Hall & Oates after a Saturday night Rays’ game. Poor Rich took his lumps on this evening, I’m afraid.

A fun and entertaining time was had by all and the full show can be found by clicking on the play button below.[podcast]https://rotorob.com/podcasts/Baseball_Podcast_Sep2710.mp3[/podcast]

By Tim McLeod
This entry was posted on Wednesday, September 29th, 2010 at 4:31 pm and is filed under BASEBALL, Podcast, Tim McLeod. You can follow any responses to this entry through the RSS 2.0 feed. You can leave a response, or trackback from your own site.