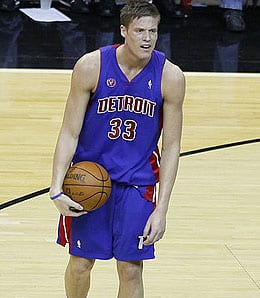 Jonas Jerebko was perhaps the biggest surprise of the 2009 NBA Draft.

As we get deep into the NBA Conference Finals, I thought it might be a good time to check in with a little hoops insight.

I’ll be interested to see where Detroit sophomore Jonas Jerebko lands in next year’s drafts, coming off a surprising rookie season where the second round pick wound up seeing much more action than anyone could have anticipated. He played well enough later in the season that he earned a Wire Troll recommendation in mid-March, at that proved astute as he enjoyed a huge month before slowing somewhat in April. The Swedish born power forward was inconsistent from a production standpoint, and his ceiling is likely limited, but he provided a great spark of energy and toughness for a listless Piston team and proved to be one of the true steals of the 2009 draft. I could see selecting Jerebko with a late-round flier, but don’t expect him to outperform his rookie effort by much, if any in 2010-11.

In looking at other big men from last year’s draft class, Tyler Hansbrough was one of the bigger disappointments, as injuries limited him to less than 30 games and really stunted his ability to show what he’s capable of. That’s why I think he’s a serious sleeper heading into next season. Hansbrough showed flashes, earning a Wire Troll recommendation in mid-December, and while he absolutely rolled at the end of calendar year 2009, he played just four games after the year changed thanks to a litany of health woes. Still, Hansbrough has double-double potential written all over him, and while I can still see some growing pains for the former Tar Heel star, I have really high hopes that this kid can be a very strong NBA player in time. There are some who think Hansbrough is headed to bust city, but I’m willing to spend a late-round pick on him to find out. Sleeper city, baby!

So if Hansbrough was a disappointment, what does that make eighth overall pick Jordan Hill? The Knicks thought so highly of their 2009 first rounder that they packaged him up in a deal to land perpetually injured, highly overpaid and now overrated Tracy McGrady. Hill got more of a chance to play in Houston after the deal, and actually put up a couple of serviceable lines in mid-March, but I can’t see him getting many touches on a Rocket team that features ball hog Kevin Martin, plus Aaron Brooks, Luis Scola and Trevor Ariza. One hope is that if Chris Bosh is sent to Houston in a sign-and-trade, Hill would likely head north to Toronto to join his third team before he starts his second season. If that happens, however, Hill could have a chance to see significant minutes in the Toronto frontcourt. It’s a longshot, though.

Is it possible that the Celtics could follow the Bruins and blow a 3-0 series lead against Orlando? In Game Six Friday night, Boston will look to finally put the pesky Magic away, or else risk heading back to Orlando for a possible date with destiny – and not the good kind. Unfortunately, the Celtics are suddenly looking pretty beat up as their bench was decimated in Wednesday’s loss. Both Marquis Daniels and Glen Davis suffered concussions, while Rasheed Wallace tweaked his back and all three are considered game-time decisions. Uh oh. Sheed’s injury is particularly bad timing, as he is coming off his finest game of the playoffs, canning a team-high 21 points before – shock of shocks – fouling out. Reduced to a reserve role which saw him come off the bench in 66 of his 79 games this season, Wallace endured his worst NBA campaign, but he’s been playing very well against Orlando, averaging 10.8 PPG and 2.4 RPG while shooting 48.6 per cent from the field and draining nine treys through the first five games. The 15-year veteran’s career is clearly winding down, so you have to figure this could be Wallace’s last chance to add another ring to his resume.

Meanwhile, Wallace’s old teammate Tayshaun Prince’s days could be numbered in Detroit as well. Rumours of him being on the trading block have persisted in the past year, but GM Joe Dumars says he’s not necessarily trading his veterans. We’ll see. At any rate, after struggling with injuries in the first half, Prince started heating up in February, earning a Wire Troll recommendation just in time for a big March and an even bigger April. Yes, he’s getting a bit long in the tooth at 30, but apparently Detroit still believes Prince can be part of the turnaround. He remains one of the NBA’s better defenders, but after seeing his streak of six straight seasons without a missed game end and losing 32 games to injury last year, he’s clearly no longer one of its most durable players. Prince’s overall numbers dipped last year as he continues to employ the 3-ball less and less and wound up getting to the line for his fewest attempts per game since 2003-04. He remains a decent late-round pick, but don’t be shocked if come the trade deadline Prince finds himself wearing a different uniform.

Over in the Western Conference Finals, Grant Hill has been playing some solid D on Kobe Bryant, but offensively, he continues to be less and less of a factor. Now 37, Hill is coming off his worst offensive year ever and also had the lowest SPG average of his career. While he enjoyed a fine March, earning a Wire Troll recommendation for his efforts, he slowed down in April and other than the San Antonio series, and one game each in the Portland and LA series, he hasn’t done much offensively. Of course, Hill is simply not getting the same kind of PT against LA that he saw in the series against the Spurs. Hill’s had a tremendous career, and while he never did quite turn the corner into the massive superstar we thought he’d become (injuries played a huge role in that), it was great to see Hill overcome his health woes and show himself as extremely durable the past couple of seasons in Phoenix. What would be even sweeter would be to see the Suns go to the Finals and have that be Hill’s swan song.

By RotoRob
This entry was posted on Friday, May 28th, 2010 at 11:48 am and is filed under BASKETBALL, Fantasy Notes, RotoRob. You can follow any responses to this entry through the RSS 2.0 feed. You can skip to the end and leave a response. Pinging is currently not allowed.