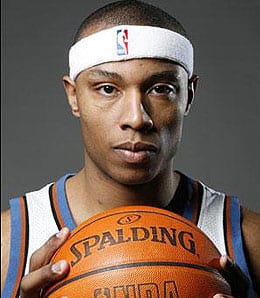 Caron Butler is over his allergic reaction.

Welcome to The Wire Troll for Week 19. Last week, we profiled some of the players that stood to benefit from the recent flurry of activity at the trade deadline. Well, it’s a week later now, and injuries and a few unexpected twists of fate have combined to shuffle the Fantasy deck a bit. Intrigued? Thought so…follow along as we break down some of the new faces in new places, old faces in new spaces…and also talk of cake. As the season wanes, many of your league mates are undoubtedly prepping for baseball season – and ignoring their Fantasy Hoops team in the process. For shame…let’s teach them a lesson about attention span, shall we?

First, the injury news: Chris Bosh has missed four straight games due to what’s being called a mildly sprained ankle, and the Raptor star continues to be day-to-day. His status for this week should remain in question until he makes it back onto the court. Ditto for Dwyane Wade, who has missed four straight games with a strained calf muscle, making him a very risky play for the upcoming week. We won’t see Corey Maggette this week, as he received an injection for his injured hamstring, and is expected to miss at least two weeks.

The Mavs’ Caron Butler suffered an allergic reaction to medication and missed time last week, but he’s expected back in short order. Not so for uber-guard Chris Paul, whose recovery from knee surgery is expected to last at least another week, and possibly longer. His surgery was performed January 29, and Paul’s original timetable was set at 4-to-6 weeks. Take your time, CP3 – that Darren Collison guy is holding down the fort just fine. Josh Howard is done for the season after tearing his ACL on Monday, and Al Thornton has stepped into the void. More on Al later. Shaquille O’Neal suffered a sprained right thumb Thursday, and his status for the upcoming week is very much in doubt.

Houston’s Trevor Ariza will miss at least a few games with a sore hip, and Shane Battier should benefit the most from Ariza’s absence. Kobe Bryant is back in action, but Paul Pierce remains sidelined by a sore right thumb – and it sounds as though the Celts are going to take their time in getting their star back on the floor. Bench Pierce if you own him, as he’s listed as “out indefinitely.” Marquis Daniels is starting in Pierce’s place, but he is not Wire Troll-worthy…yet. However, we are watching you, Marquis.

And if you’d like to watch us as we watch Daniels (and everyone else in the NBA), simply follow the Troll on Twitter; we’ll keep you up to date on waiver wire-worthy news as it happens.

Robin Lopez, Phoenix Suns: The Troll profiled Lopez a while back, when his breakout game on national TV made him the waiver wire darling du jour. Back then, boards and blocks were about all he brought to the table – but no more. Lopez has found his scoring touch, averaging 13.4 points per game in February – including 14.3 per outing in seven games since the All-Star break. The youngster canned a career-high 30 against the Clippers Friday night, and he did it with both Amare Stoudemire and Steve Nash on the floor. Lopez will throw in the occasional clunker, but he is well worth considering if you need big man stats in deeper leagues.

Drew Gooden, Los Angeles Clippers: Well, who saw this coming? Gooden looked like a buyout candidate when he landed in L.A. as part of the Antawn Jamison deal, but after the veteran posted 20 points and 13 boards Wednesday night, then followed up with 15 and nine on Friday, things changed a bit. Gooden is now starting at the four for the Clips, and DeAndre Jordan and Craig Smith have descended into Fantasy afterthoughts. As long as Gooden is seeing starter’s run, he’s worth rostering in leagues with 12 or more teams.

Anderson Varejao, Cleveland Cavaliers: With Shaq Daddy on the shelf, Varejao will be leaned upon heavily to do what he does best: create havoc under the boards. Over the past three games, Sideshow Bob has averaged 12 points, 8.3 boards and 1.3 blocks – and more of the same should be in store as long as he’s seeing significant run. This is potentially only a short-term situation, but Varejao is worth a speculative add in case Shaq’s bum thumb keeps him out for a while.

Tayshaun Prince, Detroit Pistons: As the song goes, someday your Prince will come…and it looks like that day is finally here. Injuries limited the steady – and heretofore eminently durable – veteran to just 19 games before the Break, but since then, Tayshaun has been on fire. In seven games since the season cranked back up again, Prince has averaged 14.1 points, 7.1 boards, 3.9 assists, 0.9 steals and one block per game – while shooting 50 per cent from the floor. Prince is owned in about 60 per cent of Yahoo! leagues, and he makes a fine add if your team needs a shot of across-the-board Fantasy production.

Al Thornton, Washington Wizards: Thornton arrived in Washington as a piece of the Jamison deal, and Howard’s knee injury has opened the door for some big minutes for Al. He has been quite good – averaging 15 points, 5.6 boards, 1.4 dimes and 1.4 blocks in five games as a Wizard. Don’t expect those block numbers to stay in the one-plus range, but Thornton should continue to pump the jump (it’s what he does) for the foreseeable future. Points are what he does best, and any peripheral help he provides should be considered icing on the cake. Note: Thornton’s style of cake is not particularly yummy…since the aforementioned icing doesn’t show up nearly enough to make him a major Fantasy factor.

Hakim Warrick, Chicago Bulls: Since coming over from Milwaukee in the John Salmons deal, Warrick has averaged 11.4 points, 5.6 rebounds and 1.4 assists in nearly 27 minutes per game. He looks to have fallen into a role as the first forward off the Bulls’ bench, but could potentially earn a starting gig if Taj Gibson struggles. The Troll likes Taj as well, so this could very well be a time-share for a while. Warrick is versatile, though, and should maintain his playing time for at least the near future. Grab him if you’re in a deep league, but just keep an eye on him in standard-sized formats.

Jarrett Jack, Toronto Raptors: Jack has stepped up big-time since Bosh went down, averaging 20.8 points (with 2.3 treys) and 7.4 assists during his four-game absence. The sidebar story here is that Jack has held off former starter (and high-round Fantasy draft pick — ugh) Jose Calderon in their battle for minutes. Jack is worth at least a short-term pickup while Bosh is on the shelf, and he should have value as long as he continues starting for the Raps at the point. For the season, Jack is averaging 11.1 points and five assists (12.8 and 5.6 as the starter), and he has been in the starting lineup since early December.

Tracy McGrady, New York Knicks: We here at The Troll came close to recommending T-Mac last week, and when he started and played well we made sure that our Twitter followers got the word early. What stayed our hand then was McGrady’s uncertain role with the Knicks, and his well-documented fragile nature. That propensity for injury reared its ugly head in T-Mac’s second game, when he banged his knee a couple of times, and made comments about possibly not playing the following night. If you’re a new T-Mac owner, get used to this kind of thing. McGrady has averaged 17.5 points, 3.0 rebounds and 4.5 assists in four games as a Knick, and should probably be owned in most Fantasy leagues at his point. If you own him, be prepared to cut bait when the injury bug bites again.

Lou Williams, Philadelphia 76ers: Allen Iverson is still out tending to personal issues, and it’s looking more and more like AI’s time in Philly may be drawing to an end. Williams, though, is reminding everyone why he was a Fantasy stud in the pre-AI days early in the season. In the three games since he returned to the starting lineup, Sweet Lou has averaged 20.3 points, 6.3 rebounds and 5.7 assists – along with 2.7 treys and 1.7 steals. While he’s not widely available (70 per cent ownership in Yahoo! leagues), Williams is certainly worth grabbing if he’s floating around on your league’s wire.

T.J. Ford, Indiana Pacers: Here we go again; Ford is once again starting for the Pacers at the point, and for good reason: the diminutive backcourt man has averaged 14.5 points and 4.0 assists in six games since the Break. He was so-so in his first start since December 30, scoring 17 points (on 3-for-10 from the field) and dishing five dimes against Milwaukee on Thursday. If Ford can ever settle in as the starter at the point, he has the skills to put up solid numbers…but that’s a very big “if.” Still he’s worth adding if you need points and dimes.

By Buck Davidson
This entry was posted on Saturday, February 27th, 2010 at 8:02 pm and is filed under BASKETBALL, Buck Davidson, The Wire Troll. You can follow any responses to this entry through the RSS 2.0 feed. You can skip to the end and leave a response. Pinging is currently not allowed.