The Wire Troll: Flavour of the Day? Vanilla 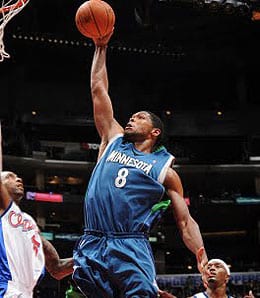 Now that he’s back at the three, look for Ryan Gomes to start rolling.

Welcome to the Week Eight edition of The Wire Troll. Now that the U.S. Thanksgiving holiday frivolities (and convenient metaphors therein) are well behind us, we once again find health-related news forming the basis for much of our Fantasy hoops fodder. The luckless Indiana Pacers are once again feeling the bite of the injury bug, as top scorer and Fantasy stud Danny Granger looks to be out for at least a month after tearing his right plantar fascia (that would be the connective tissue on the bottom of the foot for you non-medical types). Since Granger’s injury happened Tuesday, weekly lineup leaguers were once again stuck without their stud – and had no recourse to try to shuffle their lineup and adapt. Hopefully this was just one more nail in the coffin of the ridiculous and out-dated league format known as “weekly lineups.”

With Granger on the shelf, the battle for playing time in his stead should make for some interesting rolling of the Fantasy dice. Mike Dunleavy is the obvious successor, but the Pacers are limiting his minutes as he recovers from injuries of his own. Options abound in Indy, and savvy Fantasy owners would do well to pay close attention to the Pacers’ box scores over the next few days; if someone can emerge form the logjam he could see a huge spike in Fantasy value.

The Andre Miller trade watch officially begins this week, as the Trail Blazers may look to move the talented but under-utilized point guard after his no-trade restriction expires Tuesday. They figure to be looking for a big man, as centre Greg Oden’s season appears to be over after he fractured his left patella December 5. Oden was off to a fine start this season, averaging 11.1 points, 8.5 rebounds and 2.3 blocks per game – but we’ll have to wait until next year to see if the big man can finally fulfill his awesome potential. His bum wheels figure to make him a huge draft day risk again in 2010.

Joel Przybilla, Portland Trailblazers: With Oden lost for the season with yet another knee injury, Portland turns its starting centre job over to Przybilla. The Vanilla Gorilla (if that isn’t the greatest NBA nick I don’t know what is) won’t score very often, but he can be an absolute beast on the boards. He should also be a fine source of blocked shots as long as he holds down the starting gig. In his first three starts, Przybilla averaged six points, nine rebounds and 1.3 blocks per game. Based on his career history, those kind of numbers are what one should expect from the Gorilla going forward. Be ready to cut bait if the Blazers trade for a big man.

Chris Andersen, Denver Nuggets: The Bird Man has seen a nice increase in his minutes lately whilst spelling the injured Kenyon Martin (What?! K-Mart Injured?! Impossible!) and is back swatting down shots at a furious rate. If you’re in need of blocks, the Bird is the word…but temper your long-term expectations, since Martin’s finger injury is not reckoned to be serious.

Samuel Dalembert, Philadelphia 76ers: Dalembert has been on a nice roll of late, and has even picked up his scoring production a bit closer to respectable levels. The boards and blocks will always be there, but when Sammy D. is putting up 8-10 points a night, he’s worth adding in just about every league.

Ryan Gomes, Minnesota Timberwolves: With Kevin Love back in the starting lineup (and behaving like an absolute Fantasy monster, thank you very much), Gomes moves back to small forward, where he’s much more comfortable. Gomes can be a bit inconsistent, but when he’s rolling he is capable of putting up some strong numbers in points, boards and three-pointers. Many Fantasy owners soured on Gomes after a slow start, but if he’s available in your 12-team or larger league, he’s definitely worth a waiver-wire grab.

Tyler Hansbrough, Indiana Pacers: Snap to, deep leaguers – Hansbrough has stepped up big-time since Granger went down, scoring a career-high 21 points on Friday after throwing in 13 the previous game. With Dunleavy medically limited to about 20 minutes per game, Hansbrough figures to see plenty of run for at least the near future. If your league has more than 12 teams, Hansbrough is well worth adding while he’s on his current hot streak; just be prepared to cut bait if Dunleavy’s minutes begin to increase.

Josh Howard, Dallas Mavericks: Howard returned to action Tuesday, throwing in 20 points, pulling down six boards and racking up three steals against Phoenix. We’re not convinced that Howard’s injury woes are behind him, and the Mavs are being cautious with his minutes for the time being (he played Friday, but sat out Saturday’s game). Even so, if Howard is still on your league wire he’s definitely worth a pick up at this point; if he makes it back to full health he could well put up starter-worthy numbers.

Courtney Lee, New Jersey Nets: Lee looks like he’s finally healthy, and the fact that he has averaged 14.2 points through six games in December bodes well for his Fantasy fortunes going forward. While the points are nice, what should grab Fantasy owners’ attention is the 2.5 steals C-Lee has averaged so far this month. The Jersey backcourt is a bit crowded at the moment, but Lee looks to have carved out a nice niche for himself at the two. He is a borderline option in standard leagues, and should be 100 per cent owned in leagues deeper than 12 teams.

Larry Hughes, New York Knicks: The streaky Hughes is back on another run of “good,” and with Nate Robinson firmly entrenched in coach Mike D’Antoni’s doghouse, Hughes should continue to see plenty of run. You know the drill with Hughes: grab him while he’s hot, dump him when his shot goes south…and believe us, it will. For now, though, saddle up and enjoy the ride.

By Buck Davidson
This entry was posted on Sunday, December 13th, 2009 at 10:38 am and is filed under BASKETBALL, Buck Davidson, The Wire Troll. You can follow any responses to this entry through the RSS 2.0 feed. You can skip to the end and leave a response. Pinging is currently not allowed.