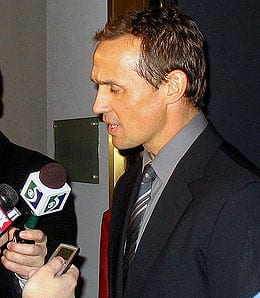 After 27 years, Steve Yzerman has said goodbye to the Detroit Red Wings.

How bizarre will it be to see Steve Yzerman involved with any team other than the Detroit Red Wings? Still, taking over as General Manager of the Tampa Bay Lightning is a great opportunity for a man who is clearly ready to head up an NHL club. Sure, he could have stuck around for as long as it took until he got his opportunity to run the Wings, but imagine the pressure that would have been heaped upon the local hero if he was suddenly thrust into the top position in Detroit. And imagine if he had failed.

Here, he goes to a situation where he gets a team with a great, mostly young core – Vincent Lecavalier, Martin St. Louis, Steven Stamkos, Victor Hedman – that is on the upswing, and on the cusp of something special. Yzerman has a chance to build something lasting in Tampa in a situation he can definitely put his own stamp on. And that’s a chance that he might never have had in Detroit. So, as weird as it seems to see Yzerman leave the Motor City, I think he’s made the right choice.

The Twins have had one of the best offenses in the American League for the past couple of years, and while much of the credit is heaped on Joe Mauer and Justin Morneau, how about the contribution that lead-off man Denard Span has made? He had an absolutely crappy start to the season, batting just .211 in April, but a recent hot streak has him up to .344 in May. He’s hit in six of his past seven games, going 13-for-30 with eight runs.

Take away that hitless game – admittedly a real stinker (0-for-7 on Saturday) – and he’s 13-for-23 during this run. Span has lifted his overall BA from .259 to almost .290 over this period, and best of all, he continues to prove that it’s almost impossible to knock him out of the lineup. He left early Sunday with a shoulder ailment, but after missing Monday’s game he was right back on the field Tuesday. No wonder he leads the American League in plate appearances. I’m particularly encouraged by the fact that Span’s walk rate has bounced back this year.

Heading into the season, we pegged him as a top 35 outfielder, but based on his play through almost two months, he’s probably been among the top 20 at his position.

Over in the National League, it sure as hell looks like the end of the line is coming very soon for Gary Matthews Jr. The 35-year-old outfielder has been so bad thus far that it actually appears very generous that we ranked him among the top 120 outfielders in the game heading into the season. Let’s put it this way: he’s 5-for-24 with one RBI in May and has exactly one hit in the last 10 days, yet is looking better than he did in April, when he went 5-for-31 with 0 RBI.

Once Carlos Beltran is ready to rejoin the team, the Mets will probably finally bite the bullet on the $1.8 million Matthews is owed and send him packing. But it might even happen sooner than that; there are calls for the Mets to take a look at outfielder Jesus Feliciano, who is currently tearing it up at Triple-A while Matthews eats up roster space in New York. It’s about time to say bye-bye to Sarge Jr.

By RotoRob
This entry was posted on Thursday, May 27th, 2010 at 2:05 pm and is filed under BASEBALL, Fantasy Notes, HOCKEY, RotoRob. You can follow any responses to this entry through the RSS 2.0 feed. You can skip to the end and leave a response. Pinging is currently not allowed.