The Wire Troll: The Birdman Cometh 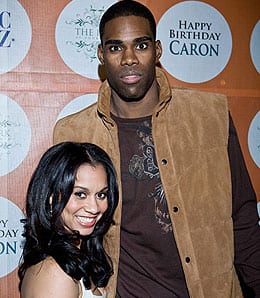 Antawn Jamison’s knee has slowed him down, but he’s still bagging the hotties, so who cares?

Welcome to the Wire Troll for Week 20. Hardcore Fantasy hoops players love the start of baseball spring training. Why? Because it draws a large number of players’ attention away from their Fantasy Basketball team…leaving the gates wide open for the astute owner (that would be you, bunkie) to pluck the finest fruit from the Fantasy wire. You’ve come to the right place, because The Troll is where you’ll find all of the hottest under-the-radar players that are probably sitting out there waiting for you. Read on – just try to keep it between us, okay? Let the slugs in your league go hoo-ha over Aroldis Chapman’s 100-something mile-per-something he did in a practice game. Meh – there’s Fantasy Hoops championships to be won first.

In injury news, Luol Deng, Derrick Rose and Joakim Noah of Chicago are all ailing – with Rose’s bruised wrist looking like the least severe injury. Rose could be back on the court by the time you read this, but Deng’s return date from his calf injury is a bit more fuzzy. Noah does not figure to be back until at least late March. Tony Parker looks to be done for the regular season, and can probably be dropped in redraft leagues. Gerald Wallace, Antawn Jamison, Rodney Stuckey, T.J. Ford and Andre Kirilenko are all day-to-day with various injuries, so check their status before running them out there this week. Uber-guard Chris Paul is close to returning to practice, but it doesn’t look like he’ll play this week. Jason Terry may return for some part of this week, but he’s a risky play. Kenyon Martin should miss two weeks with a bad knee, while Yi Jianlian looks to be out until the end of the week. Peja Stojakovic will be out at least two weeks with a lower abdominal strain, and his owners should look elsewhere for their trey fix.

From the rumour mill: Guard Larry Hughes may sign with Charlotte in the next few days, so be prepared to add him if it looks like he’s in for some decent run for the ‘Cats.

Stay up to date on this and other breaking waiver-wire-worthy news by following the Wire Troll on Twitter.

Brad Miller, Chicago Bulls: With Noah still battling plantar fasciitis, Miller has stepped up big for the Bulls. The 33-year-old veteran has averaged 14.3 points, 6.2 boards and 1.8 assists in six outings this March – while logging over 30 minutes per game. Noah has played in only four games since February 5, and his return date is still unclear. While Noah’s on the shelf, Miller is worth owning in larger league formats, and could even be useful in standard leagues if you’re thin at the centre position.

Jason Maxiell, Detroit Pistons: Ben Wallace’s creaky knee is acting up again, and as long as Big Ben is ailin’, Maxiell will keep sailin’. The burly power forward has stepped into the post for the Pistons in Wallace’s absence, averaging 9.4 points and 10.6 rebounds in his last five games. Maxiell is a good add in most formats, but keep in mind that his minutes will plummet when Wallace makes it back onto the court.

Chris Andersen, Denver Nuggets: With Martin out indefinitely due to a gimpy knee, Andersen has stepped up and does what The Birdman does best: Yank and Swat. In his past five games, Andersen has averaged 9.8 points, 7.6 rebounds and a lofty 2.8 blocks. He should see plenty of run while K-Mart is on the shelf, and can provide elite-level Fantasy help in blocked shots – along with decent support on the boards.

Terrence Williams, New Jersey Nets: With the Nets having been eliminated from the playoff chase sometime in mid-December or thereabouts, the NBA’s sad-sack franchise appears to be committed to trotting its youngsters out there and seeing what happens…and hoping that people come to watch that “something.” Williams, the 11th overall pick in this year’s draft, has averaged 14 points, 7.5 boards and five assists per game in March, infusing a bit of hope into a team that has redefined the term “bad” this season. Williams is sure to have his ups and downs the rest of the way, but a swingman averaging seven-plus boards and five dimes per night is certainly worth at least a look in just about every Fantasy format.

Reggie Williams, Golden State Warriors: Williams is the latest beneficiary of the Warriors’ injury woes and Don Nelson’s lineup Tilt-A-Whirl. The 23-year-old has averaged 12.8 points (1.3 treys), three rebounds and 2.5 assists in six games since being called up from the D-League. He just inked a second 10-day contract Friday, so he’s at least a worthwhile short-term add in larger leagues. Be prepared to cut bait when and if he falls out of Nellie’s favour.

Jonas Jerebko, Detroit Pistons: Jerebko has been on a nice little roll lately, averaging 13 points, 9.3 rebounds, 0.8 blocks and 1.5 steals through six games in March. More minutes have translated into better numbers for the rookie, and his run should continue at least until Ben Wallace returns to full health. Add Jerebko in larger leagues for now, but he could become a global option if Big Ben’s injury woes linger.

Courtney Lee, New Jersey Nets: Lee has been on fire since the All-Star Break, averaging 17.2 points and 1.6 treys – while shooting a robust 48.5 per cent from the field and 85.7 per cent from the stripe. He won’t give you much in the way of peripheral stats, but with Joisey trying to spotlights its young players, Lee should be a solid source of points and treys the rest of the way.

Jrue Holiday, Philadelphia 76ers: The departure of Allen Iverson has opened a window of opportunity for the Sixers’ No. 1 pick of 2009, and Holiday has used that break to form a potent backcourt combination with Sweet Lou Williams. Philly is going nowhere phast this season, and the club figures to spotlight its young, dynamic backcourt combination. In 13 games since the Break, Holiday has averaged 11.7 points, 1.3 treys, 4.5 assists and one steal per contest. His 48.4 shooting percentage is a plus stat as well, and his 48.6 mark from beyond the arc is downright studly. If you need help with little man stats, Holiday makes a great add.

Will Bynum, Detroit Pistons: Stuckey’s frightening collapse on the sideline has fueled speculation that he might be out for an extended period – or possibly even shut down for the season. While that would seem to be a long shot, what’s certain is that Bynum has been outstanding while playing in Stuckey’s stead. In his first three games since filling Stuckey’s spot, Bynum has averaged 10.3 points and 11 assists – including a monstrous 20-dime performance Friday night. Bynum’s value is directly tied to Stuckey’s health, but he’s a great short-term fill-in until Rodney makes it back.

By Buck Davidson
This entry was posted on Saturday, March 13th, 2010 at 7:57 pm and is filed under BASKETBALL, Buck Davidson, The Wire Troll. You can follow any responses to this entry through the RSS 2.0 feed. You can leave a response, or trackback from your own site.