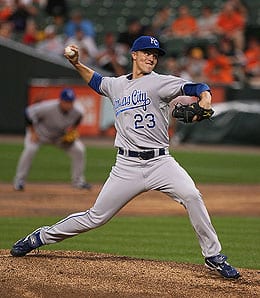 The struggling BoSox have to face Zack Greinke Saturday.

On Thursday, we discussed how Boston fans are already moaning about David Ortiz’s slow start (which, by the way, he seems to be shaking with hits in his past two games). Now I’m wondering how long will it be until Red Sox Nation starts calling for Terry Francona’s head given that the Red Sox are off to a slow start (1-3) and facing 2009 Cy Young winner Zack Greinke Saturday night. If Sox fans are looking for someone to hang, they should try the bullpen.

Ramon Ramirez looked awful on Opening Day; Jonathan Papelbon got burned by Curtis Granderson to take the loss in the rubber match against the Yankees; Hideki Okajima has been scored upon in his last two outings; Scott Atchinson’s return to the bigs after a couple years in Japan didn’t go well as he served up a dinger to Robinson Cano; and while Daniel Bard’s first three outings were solid, he allowed the winning run to the Royals Friday night, and his command has been spotty so far.

Dustin Pedroia tends to start sluggishly, but he had hits in all three games against the Yankees before taking an 0-for-4 Friday in KC (although he did draw a walk). With four runs, three RBI, a homer, a double and three walks through four games, the Little Pony has been on a nice roll in the season’s opening week. He’s got a ways to go before he’s back to his 2008 MVP form, but Pedroia is definitely heading in the right direction.

Andy Pettitte could still be available in some mixed leagues, but he might not be for long after looking so sharp in beating the Red Sox in his season debut. He’s been durable, having made at least 32 starts in six of the last seven years, and you know he’ll bag you his share of wins pitching for the World Champion Yankees. If you don’t mind taking a bit of a hit in your WHIP category, Pettitte is a fine Fantasy starter, so feel free to grab him if he’s available in your league. He gets the Angels and their middling offense the next time out, so now is the time to strike.

Jason Varitek has yet to see any action this year, but he’s expected to catch a game either in KC or Minnesota. He failed to crack our top 25 catchers this season, but if you’re in a very deep AL-only league, he could be worth picking up. Varitek cut his strikeout rate last year as he experienced a slight rebound offensively, but obviously his best days are well behind him, and his value is extremely limited as long as Victor Martinez is healthy.

If you need pitching help in your AL-only league, you might want to consider Tim Wakefield as a short-term option. Yes, he’s older than dirt and is starting to have injury issues, but man did he look solid Friday night in KC. Other than the two solo shots he coughed up, he pitched extremely well and very much deserved a win, but the bullpen had other ideas. Note that once Daisuke Matsuzaka is ready, Wakefield could be removed from the rotation, but for now, he’s a solid bet. I might sit him against the Twins – who look very solid offensively right now – but after that, Wakefield should be good to go for your team.

We recommended Kyle Davies way back at the beginning of last season, and while he did enjoy a solid April, that wasn’t one of our better picks, as he struggled for most of the remainder of the season before enjoying a big finish. Well, he again enjoyed a fine season debut this year, tossing a quality outing against Boston Friday night in a no-decision. We’re not drinking the Kool-Aid just yet given that he’s teased us in the past, but if I’m in a very deep AL-only league, Davies is someone I want to keep my eye on, although beware that he faces Detroit in his next start.

Clay Buchholz will take the mound Sunday against the Royals for his first start of the season. Part of the current wave of young and talented Red Sox pitchers, Buchholz was a disappointment in 2008, and spent the first half of last season at Triple-A as a result. However, he definitely made progress upon his return and is poised to take a big step forward this year. Bear in mind, though, that Buchholz is also a candidate to lose his job once Dice-K comes back, so a big start would definitely help his cause.

Speaking of Dice-K, he was scheduled to throw 80 to 85 pitches for Pawtucket Saturday, and wound up tossing five shutout innings, giving up just two hits and one walk, while fanning three, so he’s definitely getting closer. He’ll make two more starts in the minors before joining Boston, so if he’s available in your mixed leagues, you definitely want to monitor his progress.

And with more on the beleaguered Boston bullpen, the Sox want to have a close look at Alan Embree to see if he has anything left. Embree’s 2010 contract was declined by Colorado before Boston decided to bring him back on a minor league deal. Embree didn’t make the team out of Spring Training, but has until April 15 to opt out of his deal, so expect him to see plenty of action between now and then while the Sox figure out if he can help their pen.

By RotoRob
This entry was posted on Saturday, April 10th, 2010 at 5:29 pm and is filed under BASEBALL, Fantasy Notes, RotoRob. You can follow any responses to this entry through the RSS 2.0 feed. You can leave a response, or trackback from your own site.