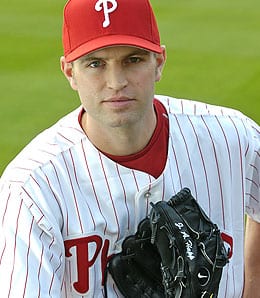 With J.A. Happ pitching brilliantly, what will the Phils do when Pedro Martinez is ready?

Do the Phillies have a potential controversy brewing? Wednesday evening, J.A. Happ pitched a complete game shutout gem, allowing four hits and striking out 10 in moving to 8-2 on the season. His ERA on the year is now a superb 2.74. Down the road in Double-A Reading, recent Phillie signing Pedro Martinez was striking out 11 over six tidy innings. Unless we see a six-man rotation, somebody is heading to the bullpen in the not-so-distant future. Good luck sorting that one out, Charlie Manuel.

Tommy Hunter of the Rangers keeps making a liar out of me. Thursday afternoon, he held the Athletics in check to the tune of three hits and two walks over seven strong innings in winning his fourth game. Finally, after many years of frustration, Ranger fans might actually have the opportunity to witness a credible rotation. Derek Holland, Neftali Feliz, and Tommy Hunter are a great looking group of young starters to build around heading into the 2010 campaign.

Junichi Tazawa now has two starts under his belt since his recent promotion to Triple-A and he’s sporting a 0-2 record. It’s probably one of the best 0-2 records you could find anywhere in the game. In 11 1/3 IP he’s only allowed seven hits and one free pass, to go along with three earned runs. He has been particularly dominant against right-handed hitting having only allowed one hit. Yes, that’s correct, one hit against righties. After watching John Smoltz get rocked again Thursday by the Yankees (that’s four starts in a row for those counting) and with Daisuke Matsuzaka and Tim Wakefield both currently on the DL, Tazawa might not be all that far away from seeing his first action with the parent club.

The Diamondbacks placed Justin Upton on the DL with a strained right oblique, another large blow to a team already reeling from a continuous string of injuries. Conor Jackson, Eric Byrnes, and now Upton make for a fairly decent outfield all currently occupying spots on the injured list. The utter lack of confidence in Chris Young was aptly demonstrated Thursday when they shifted Geraldo Parra to centrefield and inserted the recently called up Trent Oeltjen into the lineup. Oeltjen responded by going 2-for-6 and smashing a game-tying homer in the eighth. He also managed to swipe a couple of bases. Stay tuned for more on this development in Sunday’s Wire Troll.

Rajai Davis just keeps on getting it done for Oakland. This week, he’s 3-for-11 with three runs scored, one RBI and an impressive three stolen bases. If you’re looking for a serious boost in your stolen base numbers down the stretch, don’t walk, but run to your waiver wire and get Davis rostered immediately.

Wrapping things up for today, let’s get a quick rant in for good measure. What has Matt Kemp done to piss you off, Joe Torre? Thursday night, Kemp found himself riding the pine while Juan Pierre hits in the ninth slot. Kemp has bounced all over the line-up card, mainly batting in the bottom third of the order this year. Have you looked at the numbers lately, Joe? Kemp is currently hitting to the tune of a .320 BA with 15 homers, 69 RBI and 63 runs scored and he’s swiped 22 bags. In his past four games, all he’s managed to do is hit two homers and drive in 10 runs. Might he not be a better option than Pierre? Who knows, maybe another couple of those five RBI games and Kemp might actually manage to make it into the fifth or sixth slot in that batting order. Sorry Joe, but having one of your hottest bats riding the pine for Juan Pierre just doesn’t make sense and is more than deserving of the wrath of baseball fans throughout the land.

By Tim McLeod
This entry was posted on Friday, August 7th, 2009 at 11:29 am and is filed under BASEBALL, Fantasy Notes, Tim McLeod. You can follow any responses to this entry through the RSS 2.0 feed. You can skip to the end and leave a response. Pinging is currently not allowed.