The Wire Troll: And We’re Off 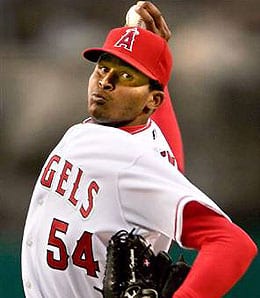 Who will be this year’s Ervin Santana — a difference maker plucked from the wire.

Welcome to the 2009 version of the RotoRob waiver wire, The Wire Troll. Over the course of the next six months we’ll try to examine some of those potential hidden gems that can be difference makers to your fantasy squad.

Each and every year the early stages of the season always lead to some great opportunities as teams set their rotations and lineups. Cliff Lee, Ervin Santana, Edinson Volquez, Alexei Ramirez, and Ricky Nolasco all provided huge value as early season waiver wire acquisitions in 2008.

Our focus this week is on several areas that fantasy owners are constantly looking to upgrade. The middle-infield, starting pitching, and closers are three positions that are either traditionally weaker, or in a state of turmoil so let’s examine these positions this week. With that in mind, let’s take a look at some early season opportunities.

Aaron Hill, Toronto Blue Jays, 2B: It looks like Aaron Hill has put those concussion woes behind him. Hitting in the two slot, he has gotten off to a great start in 2009 with two homers, eight RBI and a very solid .308 BA. That 20-homer potential, derailed in 2008 by a collision with beefy David Eckstein, looks to be resurfacing early in 2009.

Emilio Bonifacio, Florida Marlins, 3B: Heading into Spring Training, Bonifacio was not much more than an afterthought with Gaby Sanchez, Dallas McPherson, and Jorge Cantu thought to be vying for the two open slots in the Marlins infield. Sanchez has been demoted, McPherson released, and thanks to his strong spring, Bonifacio is now starting at third base for the Marlins. The 23-year-old has gotten off to an amazing start, batting .583 with nine runs and four thefts. If you feel the need for speed, he is definitely your man!

Marco Scutaro, Toronto Blue Jays, SS: Scutaro has gotten off to a very hot start, like most of the other Jay hitters. Forced into the lead-off slot, he has amassed nine runs and an amazing .435 BA, not to mention the two homers. The strong play from Hill, Alex Rios and Vernon Wells batting behind him is making Scutaro a very solid early-season pickup.

Mike Fontenot, Chicago Cubs, 2B: Now here’s a guy that garnered absolutely no respect coming out of drafts this spring. Now that he’s won the job over Aaron Miles and Lou Piniella is showing confidence in Fontenot by having him bat against southpaws, he is a solid addition. Fontenot posted nine homers, 40 RBI, and a solid .305 BA in only 243 AB in 2008. What is his ceiling in 2009 with 450 AB?

David Purcey, Toronto Blue Jays, SP: In his 2009 debut, Purcey pitched seven very strong innings, allowing only two earned runs with five strikeouts against the Yankees. Consistency could be a problem as demonstrated in his call-up last fall, but even with the occasion bump in the road, Purcey should provide decent value in deeper leagues in 2009.

Anibal Sanchez, Florida Marlins, SP: Those memories of that great rookie campaign and no-hitter have stuck in my mind and were reinforced when Sanchez opened up the 2009 season with a solid performance against the Mets. He allowed five hits and no earned runs over five innings, striking out five in a no-decision. With the Tommy John surgery now almost two years behind him, this will be the year that probably defines Sanchez and his potential moving forward in his career.

Edwin Jackson, Detroit Tigers, SP: Doesn’t it seem that the 25-year-old Jackson has been around forever? Now plying his trade for the Tigers, he got off to a solid start by allowing just two hits and striking out four in his debut. Jackson pitched solidly for 7 2/3 IP and left with a 4-2 lead before watching Brandon Lyon implode and cost him the victory. Jackson is a solid grab in both AL-only and deeper mixed formats.

Kyle Davies, Kansas City Royals, SP: A strong season by Davies will be crucial if the Royals hope to become a .500 team this season. He pitched seven solid innings, allowing only three hits with eight strikeouts against the Chicago White Sox to open the 2009 campaign. The strikeout rates were a bit off the charts and above what we can anticipate, but the former Atlanta hurler is a fine acquisition early in the 2009 season.

For those of us that like to play the game of find the potential closer, the following players should all be on the radar. This season seems to be even more chaotic than most, with closers and potential closers emerging on a day-to-day basis.

Scott Downs, Toronto Blue Jays, RP: There is something amiss in the Jay pen as B.J. Ryan continues to struggle. On Saturday, Ryan very quickly turned a 5-1 lead into a one-run game before being replaced with two outs in the ninth. Is a trip to the DL upcoming for Ryan? Downs would be the next in line and should therefore be rostered in all formats.

Ryan Perry, Detroit Tigers, RP: As mentioned above, Lyon has been terrible and has been replaced by Fernando Rodney. Is Rodney the answer for the Tigers? Probably not, so keep the name Ryan Perry in mind. The 22-year-old rookie surprised a few people by making the roster and was effective in his first three appearances. The flamethrower has the potential to be racking up saves for the Tigers before the year is out.

Scot Shields, Los Angeles Angels, RP: Every season, Shields just goes out and does his thing, posting a great ERA and WHIP with a sprinkling of saves. Is there any reason to think that 2009 will be any different? Shields picked up his first save last week as Brian Fuentes has struggled early on. Shields will continue to be an asset in 2009.

Octavio Dotel, Chicago White Sox, RP: I just don’t have a lot of confidence in Bobby Jenks. In 2008, his strikeouts were way down and he already has one rough outing in 2009. Dotel has now struck out the side in back-to-back outings and has proven he can get the job done, definitely making him worthy of a roster spot in both deep leagues and leagues that use holds.

Santiago Casilla, Oakland Athletics, RP: Joey Devine is on the 60-day DL and off to visit Dr. Andrews, leaving the closer job in Oakland to Brad Ziegler and moving Casilla into the set-up role. Ziegler, with that assortment of breaking stuff, is certainly not the prototypical closer type and does have very limited experience so don’t be surprised to see Casilla get opportunities down the road.

Carlos Villanueva, Milwaukee Brewers, RP: The strained oblique suffered by Trevor Hoffman in Spring Training has opened the door for Villanueva to start the 2009 campaign as the Brewer closer. Hoffman was originally schedule to return in mid-April but has now been pushed back to early May. Let’s face it, 41-year-old closers just don’t heal all that quick, so grab Villanueva and enjoy those early bonus saves.

By Tim McLeod
This entry was posted on Sunday, April 12th, 2009 at 3:57 pm and is filed under BASEBALL, Fantasy Notes, Ice Chips, The Wire Troll, Tim McLeod. You can follow any responses to this entry through the RSS 2.0 feed. You can leave a response, or trackback from your own site.